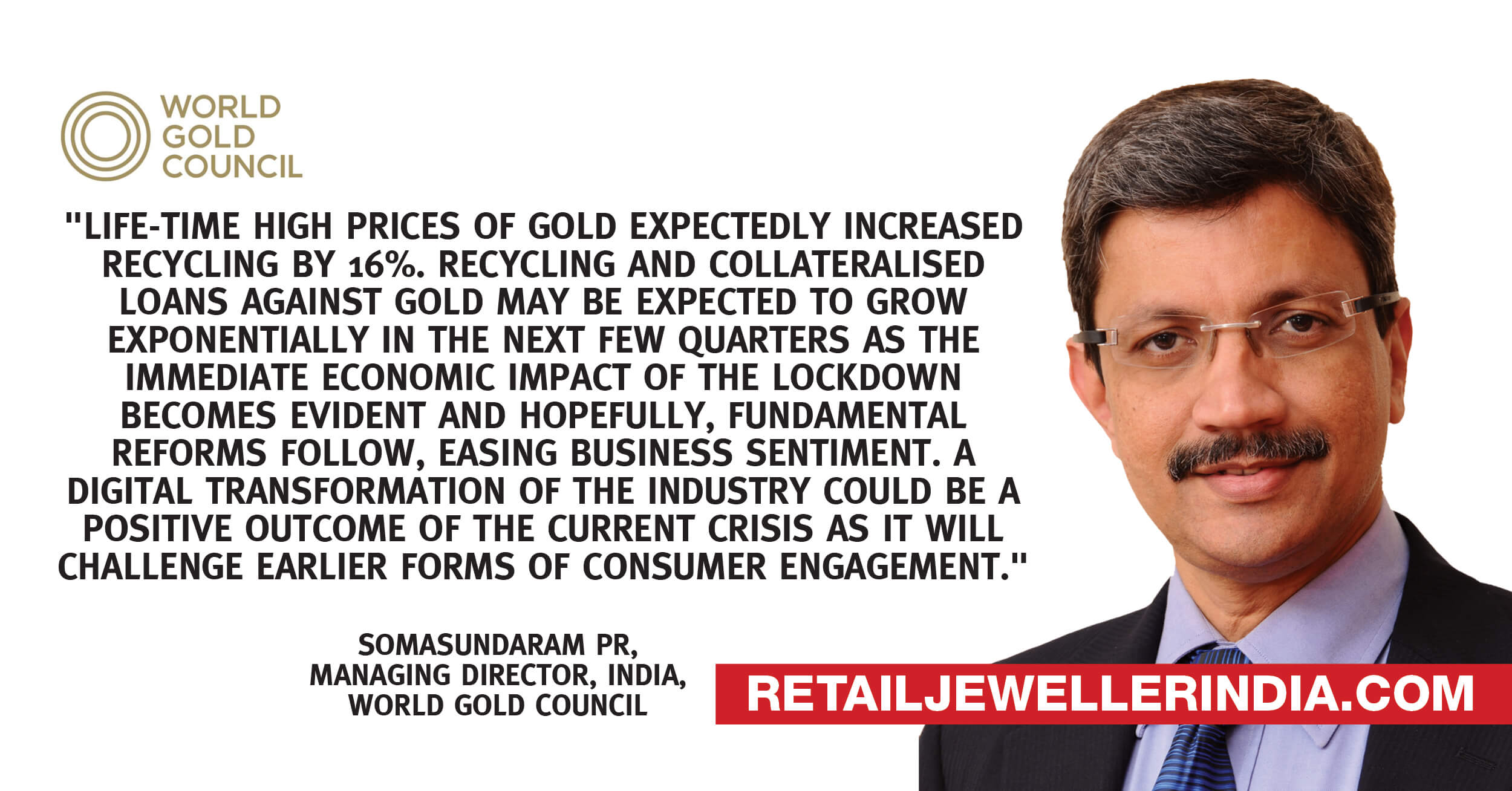 Jewellery demand during the January-March period plunged by 41% y-o-y to a 11-year low of 73.9 tonne, while investment consumption dropped at a slower pace of 17% to 28.1 tonne. Thus, overall gold demand in the March quarter slumped to almost 102 tonne, against 159 tonne a year earlier.

The June quarter is expected to be even worse, as the pan-India lockdown remains in force at least until May 3. This has dashed hopes of a recovery in Indian gold demand to 700-800 tonne in 2020, after the precious metal consumption hit a three-year low of 690.4 tonne in 2019.

On an average, the Indian gold prices were up 2.6% y-o-y in the March quarter to Rs 41,124 per 10 grams. A rise in the gold prices globally, thanks to its safe-haven appeal, and the weakening of the rupee had driven up domestic gold prices to a record Rs 44,315 per ten grams last month.

Somasundaram PR, managing director (India) of the WGC, told FE that the global miners’ body isn’t revising its full-year (2020) demand forecasts at the moment, as “we do not have sight of several critical factors at play under current circumstances”.

Somasundaram said: “Life-time high prices of gold expectedly increased recycling by 16%. Recycling and collateralised loans against gold may be expected to grow exponentially in the next few quarters as the immediate economic impact of the lockdown becomes evident and hopefully, fundamental reforms follow, easing business sentiment. In that scenario, it is possible that gold becomes a tool for revival of many SME businesses and household fortunes. This perhaps presents an opportunity that could revive GMS (Gold Monetisation Scheme) in a consumer- friendly manner.”

He also added that consumer sentiment could receive a boost with the arrival of a normal monsoon as predicted by the weather office. Issues of integrity of gold and right price will receive greater consumer attention as gold prices test affordability. “A digital transformation of the industry could be a positive outcome of the current crisis, as social distancing, contactless payments and other behavioural necessities challenge earlier forms of consumer engagement.”

Global gold demand rose 1% y-o-y to 1,083.8 tonne in the March quarter, despite a slump in consumer demand, as inflows into gold exchange traded funds rose seven times year on year. Amid uncertainties about the global economy, total investment demand increased by 80% y-o-y to 539.6 tonne between January and March, although consumer demand decreased by 28% to 567.4 tonne. Global jewellery demand fell by 39% to a record low of 325.8 tonne and central banks net buying fell by 8% to 145 tonne. Supplies, too, took a hit and dropped 4% y-o-y.