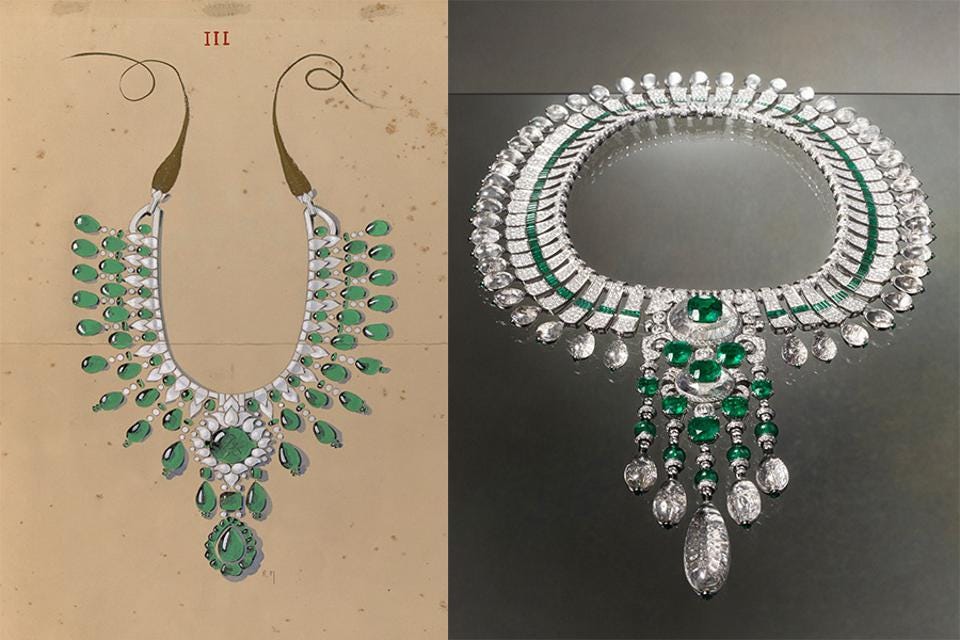 In the fabulous world of high jewellery, stories of record-setting gemstones, extravagant suites of jewellery, and large entourages are practically commonplace. However, some stories are so fantastic and over-the-top that they become the stuff of legends. In the 1920s, the Maharajah of Patiala, Sir Bhupinder Singh, travelled to Paris from India with a retinue of security guards and staff, took over 35 suites at the Ritz Paris, and placed not one of the most impressive jewellery orders of all time.

On August 2, 1928, the Maharajah of Patiala walked across Place Vendôme from the Ritz Paris to the historic Boucheron maison. His guards carried iron safes full of precious gemstones, including rubies, emeralds, pearls, and, of course, diamonds. After examining the stones, Boucheron selected 7,571 diamonds, 1,432 emeralds, and other gemstones to use in a spectacular collection of 149 pieces of one-of-a-kind jewellery. Boucheron blended Indian and Art Deco jewellery styles in these magnificent pieces. In a Zoom interview from Paris, Boucheron’s Creative Director Claire Choisne describes it as a “more organic” type of Art Deco. The pieces aren’t as linear but have a softness to them, and they retained the hallmarks of Indian jewellery.

Over the years, these memories faded and became lost in the archives. As a jewellery expert, I am fascinated by stories like the Maharajah’s. When I first came across his name on the Boucheron website several years ago while conducting research for an article, I could not believe how incredible the story was — and that no one seemed to know about it. I became instantly obsessed with it, to the point of tracking down one of his granddaughters to interview her about his jewellery collection and fabulous life. His quest for the absolute pinnacle of luxury and his willingness to cross long distances and embrace new ideas and techniques was enthralling and ahead of his time.

In recent years, there has been a resurgence of interest around the Maharajah, with several exhibitions of Indian jewellery at prestigious museums in the US and the Maharajas & Mughal Magnificence auction at Christie’s in 2019, all of which included pieces from his immense collection.

And now, Boucheron unveils a new high-jewellery collection inspired by the Maharajah’s legendary order, Histoire de Style: New Maharajahs. The collection was designed by Choisne, who is renowned for her artistic and modern interpretations of Boucheron’s archives, as well as her penchant for unusual materials and designs.

Choisne told me that before joining Boucheron she had heard whispers of the Maharajah’s legendary order, but not the details. “When I joined Boucheron 10 years ago, I think it was the first story that everybody told me. Obviously, it was the biggest one,” she said. “It’s a fairytale, and it’s totally amazing. Of course, when I looked at the archives to have a global vision of the Boucheron style, I couldn’t miss the Maharajah designs. They were totally impressive… I was totally fascinated by the story and by the pieces.”

She knew she wanted to bring a contemporary take to the fabulous order, and the Histoire de Style high-jewellery collection would be the perfect place to do it. In order to update the style of the pieces to suit a modern client, she had to reduce the scale of the pieces, which was quite substantial. Not only were they royal jewels meant to impress and to show the crown’s power and wealth, but they were designed for a man — a 6’7” man, to be exact. Although she loved the collection and personally adores strong statement pieces, they were too much for her. So, she scaled down the size of the pieces and used a mostly clear and white colour palette of diamonds and rock crystal, with just a single piece featuring spectacular emeralds. She says the mostly monochrome palette gives a sense of purity to the collection. In total, the New Maharajah collection includes five sets of jewellery, with 14 pieces in total.

The New Maharajah Necklace features nine cushion-cut Colombian emeralds weighing nearly 40 carats in a transformable necklace. In the original order, emeralds were set at the end of every piece of the necklace. To lighten the necklace’s appearance, Choisne chose to use rock crystal instead, a signature of the maison. The necklace is also transformable: the central motif can be removed and worn as a brooch. It was important to her that the necklace not just have the capability to be worn multiple ways, but that it was easy to do at home and didn’t require tools or a trip to the boutique.

In the New Maharajah earrings, Choisne shrinks the famous necklace into earrings. These hoops have the same shape as the necklace, just on a miniature scale. They are shaped like a shining sun, with diamonds and drops of emeralds on the tip of each ray, just as in the original piece.

Indian jewellery is famous for its substantial necklaces and layering, which Boucheron pays homage to in the New Maharani Set. It consists of three necklaces rendered in monochrome shades of white using only white gold, diamond, rock crystal, and pearl. The centrepiece of the parure is the Majestic Lotus necklace, which showcases Boucheron’s exceptional craftsmanship. Diamond lotus petals appear to float around the necklace, seemingly unconnected to each other. In the middle of the central lotus flower, there’s a 4.08-carat cushion-cut diamond. In addition to the diamonds, this necklace features carved rock crystal drops, a nod to India’s expertise in gem carving, called glyptique. “It’s traditional, of course, it’s not something we invented. I think our craftsmen pushed the excellence of the work,” she said.

When asked what the special order from the Maharajah meant to Boucheron, she laughs and says it is a fairytale come true, almost unbelievable. “The fact that the Maharajah opened the door of Boucheron with guards with cases of stones… It was one time. We never saw this again anywhere on Place Vendôme. It’s really a one-of-a-kind story. It’s a fairytale but in a strong way,” she said. “I would love if a Maharajah or someone comes from the Ritz, pushes the door of Boucheron, and asks me to do something like that. It would be magical, but I don’t think it will happen again.”