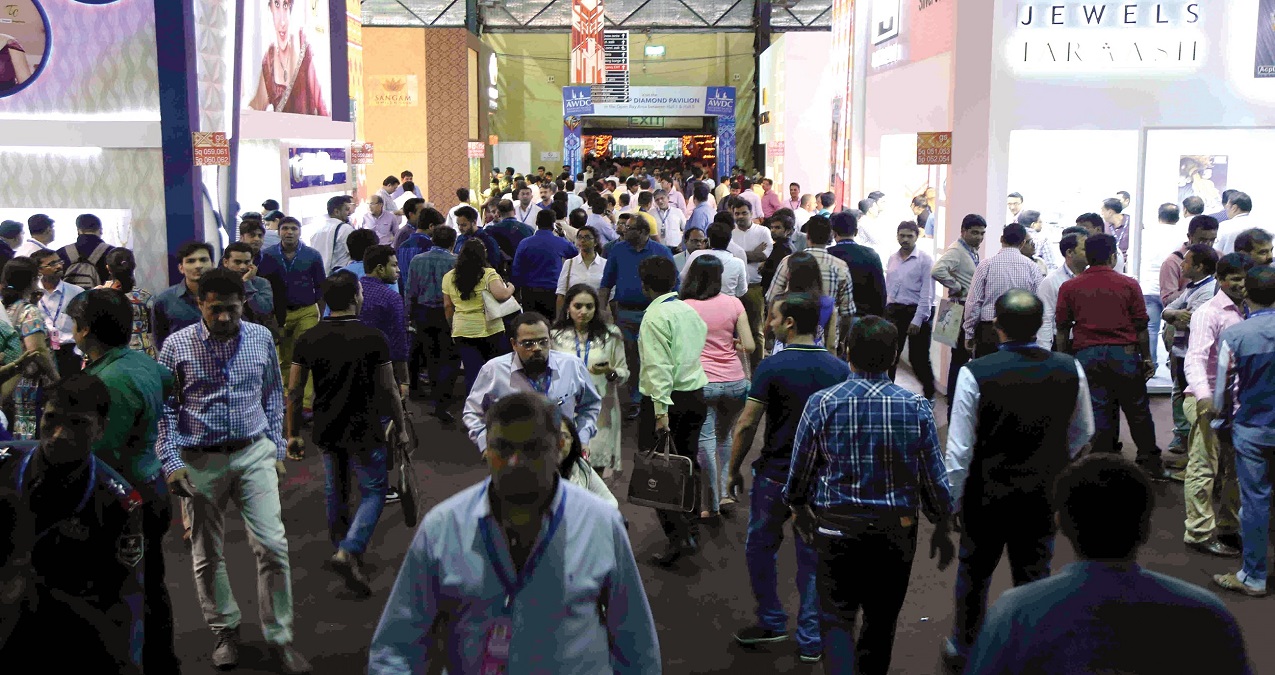 The 14th edition of IIJS Signature 2022, organised by the Gem & Jewellery Export Promotion Council (GJEPC) at the Bombay Exhibition Centre, NESCO, Mumbai, concluded successfully on 21st February. The show witnessed nearly 950 exhibitors, who occupied 1,470 booths spread across four exhibition halls. There were more than 17,242 visitors, including 571 international visitors and delegations from USA, UAE, Egypt, Nepal, Uzbekistan, and Bangladesh. According to GJEPC, IIJS Signature 2022 has generated an estimated business of Rs. 5000 crore.

The unanticipated announcement of IIJS signature 15 days prior to the event, created excitement and commotion in equal measure. The re-consideration by the organizers to conduct the show- after an initial indefinite postponement, sent out a wave of positivity into the market. “It signaled that everything is finally getting back on track,” believes Anand Shah, MD, Anand Shah Jewels.

It is also true that due to the rushed preparations the show faced certain issues that affected sales to some extent. There was less time given to the exhibitors to prepare their collections. However, enthused exhibitors, despite the hurried preparations, managed to display their best. “We showcased CNC and laser bangles, CNC with enamel, Bombay fancy jewellery and launched lightweight Turkish style jewellery,” says Popat Lal Singhvi of Payel Gold.

Amongst the few manufacturers profiting from IIJS Signature, despite the small window for preparation, is Vinit Vasa, Partner, Lotus Jewellery Creation who worked round the clock to launch theme-based collections especially for the Signature event. “For the young girls we have launched a collection based on geometrical theme; hard décor pendant sets were designed for working women and block printing designs were launched for middle-aged women,” he informs.

Visitors were considerate of the circumstances in which IIJS Signature was held. Sumeet Anand, owner, Punjabi Saraf Jewellers feels that the exhibitors had done a commendable job of ready their stock for the exhibition in a small span of time. Commenting on the changing design approach of manufacturers, Anand says, “Previously, we used to witness classic and contemporary designs in diamond jewellery, but the trend has shifted towards modern designs. In gold jewellery, I have seen good designs using pastel shades where colour stones and enamels are used.”

At the same time, many retailers keen to attend the show were unable to change their itinerary at short notice. Covid surge and resultant postponement of the show from January to February hampered customers’ visits to the exhibition.

As a result, “a lot of our regular clients could not visit the show,” adds Singhvi. But that did not necessarily impact the business for Singhvi, “We got a lot of enquiries from new clients from South, East and North India, which is not generally seen in Signature,” he informs.

Even for Mehul Solanki, Partner, Solanki Jewellers, the exhibition performed above his expectations. According to him, although demand was low at the start of the exhibition, ‘it picked up gradually,’ as a lot of customers enquired about heavy bridal sets in wedding jewellery due to the upcoming marriage season. “We had displayed antique kundan jadau jewellery at the show which elicited a good response from the customers. The overall demand was more than 10% as compared to the last edition.”

Subodh Agarwal, owner of Modern Ornaments, found more serious buyers this year, while observing that a far better inventory could have been tabled if the announcement hadn’t happened just a fortnight before. “There was an equal demand for heavyweight jewellery as for all others,” he said.

Claiming he got buyers from across the country, especially from North and East India, says Vasa, “This year, we have been able to achieve at least 5% more sales compared to the last IIJS Signature show. It is primarily because of strong buying from customers.”

Rakesh Kumar Mahajan, owner of Rakesh Jewellers, Jammu, feels that comparatively low rush this year enabled retailers to have one-on-one conversations with exhibitors for a longer period of time.

Pallav Agarwal of Sona Chandi Jewellers, Haldwani, was very excited about the show as it was happening for the first time after Covid. He utilized the opportunity to meet new vendors.

Akshay Chawla, Owner of Punjab Jewellers and Sons was satisfied exploring jewellery physically post-Covid with staff and is glad to drop the video call option this time. “We saw good concepts of Turkish designs in lightweight gold and have also seen good antique jewellery items. This year, we also worked with new vendors who had good design concepts,” Akshay said.

For Shankar Kedia, Director, Maliram Jewellers, Signature was one of the best jewellery shows post-Covid and proved to be great for temple jewellery. About 25 per cent of Kedia’s overall purchases happened with the new vendors.

BUYING ON A BUDGET

For few exhibitors, the high diamond and gold prices put a tight check on their buyer’s spends. “We had displayed kundan jadau jewellery at the exhibition and although the customers were interested, due to the high prices they deferred the purchase,” says Mihir Soni, owner of Ramniklal and Sons.

Anand Shah Jewels also focused more on the bridal collections. Shah says, “As compared to nakshi temple jewellery in gold, the response for studded jewellery was less at the show. We got most of the customers from North India.” Explaining the situation, Minek Hajisheth, Founder, Shree Radhe Diamonds says, “When the retailers are stocking, they will always wish to ensure that the prices don’t stumble in the near future.”

Echoing the sentiment is retailer Satyam Rastogi, Owner, of Kamal Jewellers, Dehradun, says, “The show was overall good. Honestly, I did not have very high expectations due to the prevailing market situation where the prices of rough diamonds had skyrocketed. Due to the high diamond prices, the majority of the buying happened in gold jewellery.”

“The high diamond prices had played a spoilsport during the Signature event as they soared by at least 15-20%. Although the big cities get adapted to the new rates quite quickly, that kind of understanding does not happen with the small cities immediately.  For example, the price of a pendant set of around Rs 5 lakhs shot up to Rs 7-8 lakhs and thus affected the sales. Due to this, we were very cautious in our purchases.”

All in all, Signature 2022 successfully battled rising diamond prices while rekindling the buying spirit of retailers who would now channel this demand down to the end-consumers for the upcoming season.