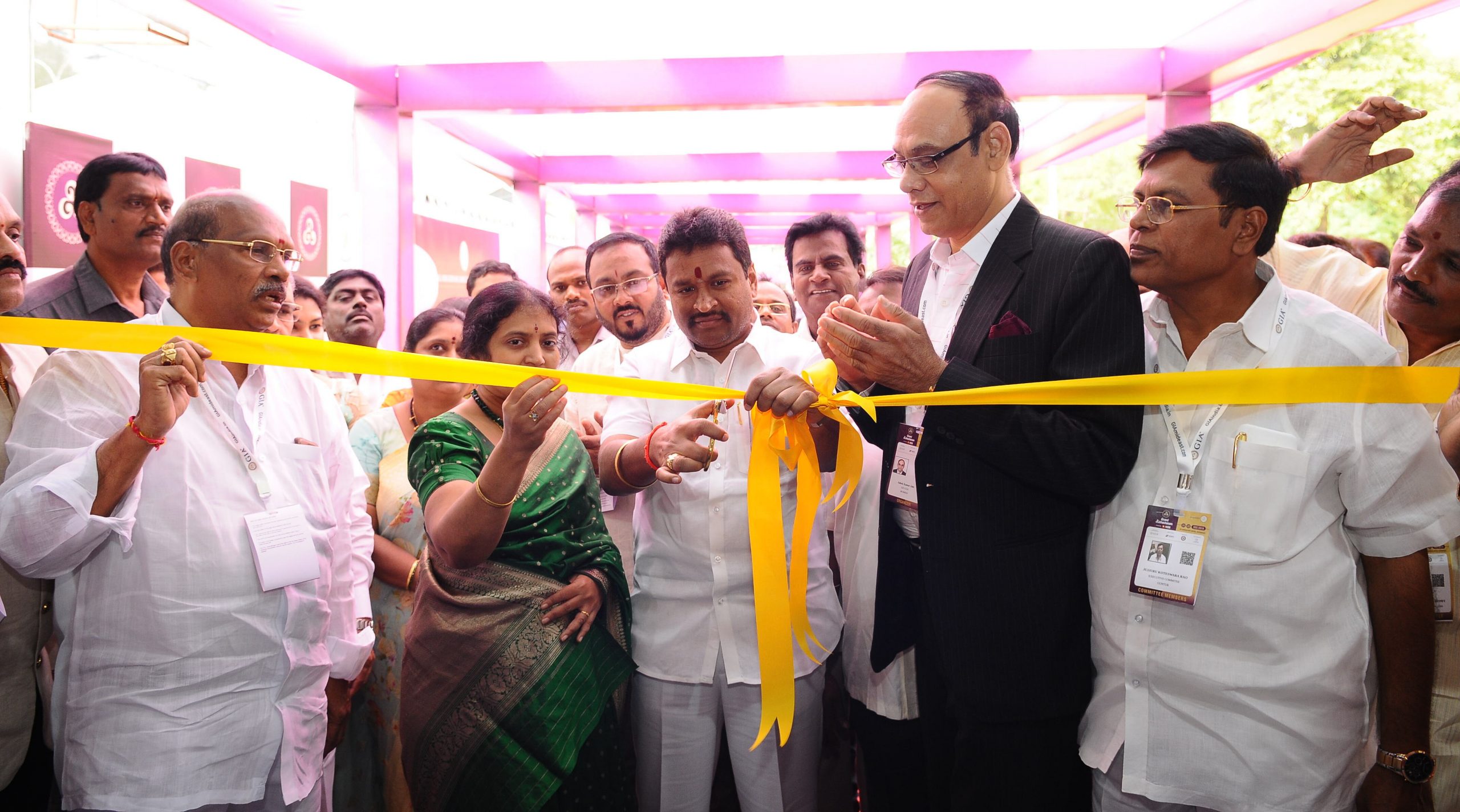 The third edition of Grand Abhushanam @ Vijayawada, organized by the All India Gem & Jewellery Domestic Council (GJC), has become bigger than ever before with more than 6,000 jewellers from Andhra Pradesh (AP) attending the event. The two-day event held from 21-22 December 2019 was inaugurated by Hon’ble State Minister of Endowments, Sri Vellampalli Srinivas. The objective was to encourage gem & jewellery trade constituents to interact and forge strong business relationships within the state of Andhra Pradesh so as to make the State a force to reckon with in the national context.

A B2B initiative of GJC, Grand Abhushanam is a networking meet organized for Gems & jewellers with the objective of encouraging people from the jewellery trade to interact and forge strong business relationships. Over the years, this show has become an epitome of innovation and a genuine networking platform in the field of Gems & Jewellery Industry. The event brings together prominent manufacturers and retailers at regional levels, thereby encouraging face-to-face interactions to promote business across the various regions and boosting businesses. It allows for healthy exchange of opinions and views with the view to address various challenges faced by the industry at local levels.

GJC hosted Business networking session through “Jewellers Connect” unique initiative, to enhance business on common platform during Abhushanam. Prominent retailers from across South India to help connect them with the local manufacturers and build healthy business relationships for a long time to come.

This initiative was divided in three sessions so that each exhibitor could meet the best retailers for business and boost business relations.We have witnessed a good amount of participating retailers from Andhra Pradesh & Telangana in the jewellers connect program. The participants appreciated the fact that they have done good amount of business and got new insights to do healthy organised business and grow leaps and bounds in the future.

In the third edition, one more feather was added to Grand Abhushanam by introducing Andhra Jewellery Award (AJA) is a new and unique Initiative of GJC, honoring and recognizing the Gem & Jewellery sector of Andhra Pradesh. The awards aim to recognize and promote talent and efforts of various jewellers and industry dignitaries that have excelled in the G&J Industry within the State.

A glittering Fashion Show (Traditional Attire) was presented on the first day of the exhibition where the models displayed the best of jewellery from Grand Abhushanama – sponsored by Mukti Gold, JaigulabDev Jewellers & Bhindi Jewellers as part of the entertainment session. It was indeed one attraction for Grand Abhushanam show to conclude this year in a Grand way.

Sri Vellampalli Srinivas – Honorable Minister of Endowments, Govt. of Andhra Pradesh, said, ”Established platforms such as Abhushanam & associated events such as Andhra Jewellery Awards (AJA) are gaining in significance due to the backing of credible institutions such as GJC. Grand Abhushanam Vijayawadacomprised various elements such as buyer-seller meets and business networking that helped create awareness, excitement & buzz amongst small and medium jewellers.Andhra Pradesh has a glorious tradition of hand-crafted jewellery making and our creations have been appreciated across the world. I urge GJC to conduct several such events as AP’s jewellers begin their march to showcase excellence and creativity in the domestic and even export markets.”

AnathnaPadmanaban, Chairman, GJC, said, “Grand Abhushanam, Vijaywada is becoming grander and bigger with every passing year and new elements such as the Andhra Jewellery Awards and fashion shows are adding to its popularity across all jewellers in AP. Wholesalersand manufacturers from Pan India showcased their latest designs and offerings to existing and prospective customers. Business Networking session through “Jewellers Connect” during Abhushanam is a unique initiative fromGJC to bring the diversity of all jewellers on to a single platform. This enriching experience is a must-have for every jeweller in the State.”

Shaankar Sen, Vice Chairman, GJC, added, “We have got tremendous positive response on the exhibitor front year on year and also in terms of increase in the number of participants and visitors. AP’s jewellers and artisans have several unique styles and craftsmanship to offer to customers. This was evident in the displays and the fashion shows, which attracted awards and accolades. Participating jewellers will definitely grow their business and attract customers from far & beyond.”

Ashok Jain, Convener, Grand Abhushanam, Director, GJC, said, “The success of Grand Abhushanam Vijayawada shows the credibility of the GJC-backed show and its growing strength year on year.Thebooths were best-in-class with state-of-the-artGerman quality structuresand we made every effort to accommodate additional booth space.Food arrangements perfectly blended with culture to present an authentic experience synonymous with the multi-facetted city. No wonderall visitors and participants enjoyed the two-day session whole-heartedly.”

Manoj Jha, Joint Convener, Grand Abhushanam, GJC, said, “During Grand Abhushanam Vijayawada, GJC hosted prominent retailers from across South India to help connect them with the local manufacturers and build healthy business relationships for a long time to come. We have witnessed a good amount of participating retailers from Andhra Pradesh & Telangana in the jewellers connect program. The participants appreciated the fact that they have done good amount of business and got new insights to do healthy organised business and grow leaps and bounds in the future. Participants are looking forward to attending similar initiative to be continued half yearly or quarterly basis if possible.”

Vijay Kumar, President, AB Bullion,said, “We are happy to partner with GJC for a stand-out event that unifies diverse members of the trade and brings them to a common business networking platform. Grand Abhushanam Vijayawada showed that AP’s jewellers have several hidden treasures that can capture the fancy of Indian and international buyers. The discovery process has just started and there is more to come and showcase to the world.”

Shantilal Jain, Chef Organizer, AB Bullion, said, “GJC has the expertise and the experience to elevate the stature of a city event to make it more attractive at a regional to national level. Grand Abhushanam Vijayawada went beyond the confines of the State and attracted gem & jewellery trade constituents from across including Telangana, Tamil Nadu, Karnataka and Kerala. We are confident that GJC will take this annual event to the next level and help jewellers in the region to showcase their talent, grow their business and attract new customers.”

About GJC: The All India Gem and Jewellery Domestic Council (GJC) represents over 3,00,000 players comprising manufacturers, wholesalers, retailers, distributors, laboratories, gemologists, designers and allied services to the domestic Gems & Jewellery industry. The Council functions with the objective to address the industry, its functioning and its cause with a 360° approach to promote and progress its growth, while protecting the industry’s interests. GJC, since the last 14 years, has been serving as a bridge between the government and the trade by undertaking various initiatives on behalf of and for the industry. GJC represents the interests of over 3 lakh gem and jewellery businesses from across the country.