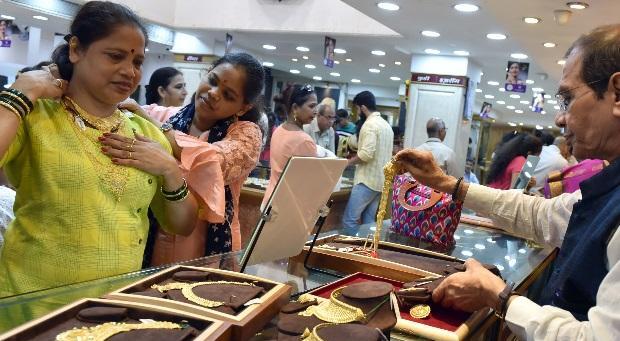 Even as demand for gold remains weak, its price has seen some turnaround in the past two months. The yellow metal now trades at a 0.5 per cent premium over its landed cost, compared to a 4 per cent discount in mid-September because jewellers have voluntarily withdrawn the display of cash price from their website.

Gold has been selling at a premium for the first time since the Union Budget for 2019-20, presented on July 5, when import duty on gold was raised to 12.5 per cent, from 10 per cent earlier.

Trading currently at Rs 38,230 per 10 gm, standard gold is quoting at an $8/oz (ounce) premium to its landed cost in India. The overall premium, therefore, works out to Rs 185 per 10 gm (one ounce is 31 gm) over its imported value in India. Industry observers say the recovery is on account of depleting stocks in the pipeline of jewellers.

Since mid-September, however, gold prices were trading at a massive discount of $60/oz, or around Rs 1,350 per 10 gm, in local currency. The sharp recovery from steep discounts assumes significance for jewellery retailers, especially when demand remains weak after the Dussehra and Diwali seasons.

“Gold prices have turned around from a massive discount to a marginal premium despite weak demand only because of our initiative. We requested jewellery retailers to withdraw displays of cash prices on their website. Even consumers would know prevailing gold prices only when they visit a jewellery store or bullion dealer’s shop. The withdrawal of cash price has reduced competition among jewellers, which has shown a positive impact on gold prices,” said Surendra Mehta, national secretary, India Bullion and Jewellers Association (IBJA), a city-based premier bullion dealers’ and jewellers’ body. In the past, many jewellers used to offer discounts to improve their liquidity situation. Sometimes, jewellers used to offer discounts on gold stocks bought on low prices to survive competition.

“Consumers often compare cash price offers from jewellers to prices displayed on their website. Based on offers from other retailers in the vicinity, buyers also used to negotiate gold price with their jewellers. The absence of such price display has narrowed the room for negotiations, leaving thereby no option for buyers but to book gold at the price offered by jewellers or bullion dealers,” said Mehta.

Meanwhile, jewellery manufacturers have decided not to extend credit to retailers from January 1 next year amid fears of default. Earlier, they were extending credit for 90 days or more to retailers, depending upon their relationships. Most jewellery retailers survived on manufacturers’ credit.

“Looking at jewellers’ reported default in recent times, retailers might throw in their hands (default) by shutting down. Thus, manufacturers’ credit extended to retailers would be at risk. Hence, as a precautionary measure, we have voluntarily decided that manufacturers must stop extending credit to retailers. Bullion dealers are anyway taking 100 per cent payment upfront for selling gold,” said Mehta.

While the halt in credit to retailers might hit jewellery retailers hard temporarily, serious and long-term players would face no problem, added Mehta.

The gold and jewellery industry is taking measures to end malpractices. Kochi-headquartered Goodwin Jewellers and Mumbai-based Raskilal Sankalchand Jewellers have allegedly defaulted on payment in the past two months.

Caratlane plans to reach 90 stores by end of FY20