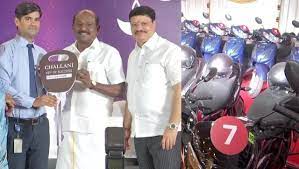 According to S Balaji, assistant general manager of publicity and marketing for Challani Jewellery, this is the first time in the country that a jewellery owner has gifted cars or bikes to the staff. Eight employees got cars while 18 got bikes, he said.

When asked what made the jewellery, which began its operation in Chennai in 2013, come up with such an idea, Balaji said, “We decided that the deserving staff should be lauded. The eight people who were gifted cars have been with the organisation right from its inception. We were absolutely new to this retail industry. For the initial four to five months, we had little walk-ins but these people believed us. Only after six months, the company began to grow. Even during the pandemic, where it is common in this industry for people to jump from one company to another for a better salary, these people stayed with us. So, the company decided to reward the staff who were supportive during turbulent times,” he said.

Balaji said the company decided against giving the employees a cash bonus for Diwali and chose vehicles as they would spend the cash in a couple of months and the gesture would be forgotten soon.

“The staff members were not informed about it. I hold a senior position in the company but even I was kept in the dark. The cars and bikes were covered with a huge screen. It was all our owner Jayanthi Lal Challani’s idea to surprise everyone. The staff members and their families were so moved by the gesture of the company that they were all in tears. Also, these are not some ordinary cars which we are giving our employees. These are automatic (transmission) cars with five years of guarantee, insurance coverage and fully loaded petrol,” he added.