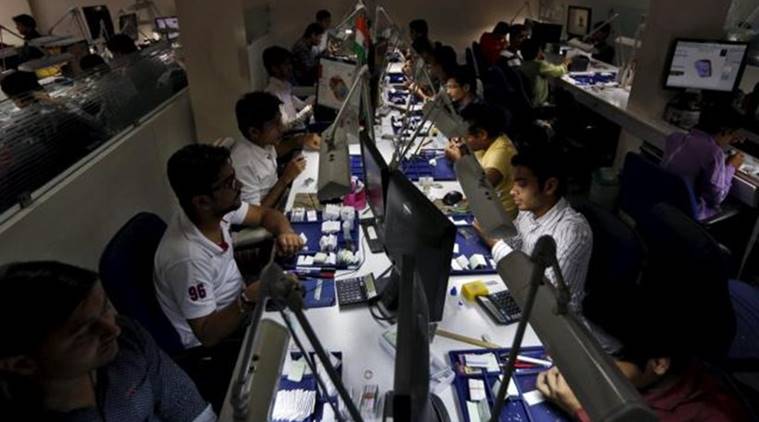 Forty-Three-year-old Dinesh Patel, a diamond polisher in Surat, sold off his car last month, just a month after Diwali. He and his wife are now scouting for an “affordable school” to send their two children from the next academic year.

The last few months have been difficult for Patel, who had migrated to the diamond hub from rural Junagadh in search for livelihood in 1991. Having studied up to Class 10, he started working in a diamond factory and trained himself in diamond cutting and polishing. He started with Rs 800 monthly salary that slowly rose to Rs 1 lakh per month, two years ago. Patel’s job is to cut and polish high quality diamonds and to check the work of other artisans in the factory that employs over 500 polishers.

As his salary increased, Patel bought a house on loan two years ago for which he pays a monthly installment of Rs 50,000. But last August, he was shocked to find that his salary of Rs 1.05 lakh has been slashed to Rs 68,000 — a cut of 35 per cent.

When Patel inquired, he learnt that the company owner had cut the salaries of all the employees. They were told that if they were not happy with the salary cut, they could quit. The employees, however, decided, to not protest.

In November again, the company slashed their salaries by another 20 per cent cut. When Patel got his salary on December 10, it was just Rs 54,000 — nearly half of what he got five months ago. The factory owners clearly told the employees that the business was not doing well as profit margins had reduced and Christmas sales were down.

“In the last six months or so, our salaries have been cut by 55 per cent and we cannot protest as we fear that our owner will sack us. We have come to know that the owner has decided to lay off 20 per cent of the staff. At this juncture, diamond polishers will not get jobs in other factories, and even if they get one, they will have to work for less salaries. The average salary of a diamond polisher in our factory is between Rs 30,000 to Rs 35,000, and even that has now gone down,” says Patel.

“The diamond industry is passing through recession for the last few months. We are experiencing such a thing again,” adds Patel, recalling the 2008 global economic recession.

A week ago, when a three-day exhibition of gems and jewellery concluded in Surat, the organisers claimed it to be “successful”, saying that jewellers and exhibitors received orders worth Rs 460 crore during the government-sponsored event held as a prelude to the next month’s Vibrant Gujarat Summit.

However, two days later, visuals of a poster warning of bad times hitting the diamond industry went viral on social media, reflecting the growing anxiety in the industry amid falling demand and liquidity crunch. The poster in Gujarati, purportedly stacked outside a diamond polishing unit, warned employees of a “recession” and advised that they spend their money judiciously and resort to savings. “With sales of polished diamonds not picking up, there is a possibility that the vacation would extend upto two to three months. This is for all the polisher brothers to note that they save money to run their houses,” the poster read.

Even the Gems and Jewellery Export Promotion Council (GJPEC), the apex body of the gems & jewellery industry in the country set up by the Government of India, agrees to such a portrayal of the “crisis” faced by the diamond industry. According to the GJPEC, import of rough diamonds dropped by half in November this year vis-à-vis last year November — from Rs 12,637.98 crore in November, 2017, to Rs 6,676.72 crore in November 2018.

As per the GJEPC data, import of rough diamonds has declined in the last five months, with the sharpest fall between July and August.

The reasons, diamantaires say, range from saturation in the market to banks wary of lending to the small and medium units. “There are many factors responsible for this, including weakening of rupee vis-à-vis dollar in the currency market (that made import costly); secondly, money lended by the banks to the diamond industry; and thirdly, is there is no major demand of diamonds in the international market. The poor demand in the global market could be because of the pending stock of international jewellers, and lack of fresh demand,” GJEPC Gujarat region chairman Dinesh Navadia told The Indian Express.

“While the situation has not come to laying off workers, but we expect that diamond manufacturing unit owners will reduce production to sustain in the market,” Navadia added.

However, many feel that the liquidity crunch is the diamond industry is not fully due to the factors cited by GJEPC regional chairman. While agreeing to the contention that there has been a slump in the demand, Surat Kirti Shah, who owns a diamond factory in Surat, feel that shutting of factories and cutting salaries of workers may not help much. “Usually diamond factory owners stock money to run their business in lean times, but we now see that owners have started investing in real estates and other businesses. Therefore, the money meant to support the diamond business in bad times has been diverted, resulting in a liquidity crunch in the industry,” says Shah.

“The other reason is that after the Nirav Modi fraud case, bank authorities have become strict and are lending less money to the industry. They have also started collecting pending installments from the diamond factory owners,” Shah adds.

According to Shah, during the last major economic recession in 2008, salaries of diamond polishers were slashed by 25-30 per cent. “Somehow we survived and ran the factories for a whole year, and later in 2009 the market bounced back and there was a good demand in the international market. We then started giving full salaries to our employees and even gave them a raise as they remained loyal to us. At present, the situation is critical for diamond industry, and we have to survive somehow. We have also told our employees not to spend money carelessly and save them for crucial coming months,” Shah says.

Surat, where eight of the ten diamonds in the world are polished and nearly seven lakh polishers work, was worst hit during the global economic meltdown in 2008. After which, thousands of diamond polishers had switched to other jobs like working in embroidery and textile units, while many returned to their villages in Saurashtra to till their farms.

Anxious of the 2008 repeat, the diamond industry is now desperately banking on revival of demand post Christmas and New Year vacation in Europe and the United States.

“The major business season in the diamond industry is Christmas sale that starts from September and lasts till November, when polished diamonds are exported abroad. Now, with the Christmas and New Year vacation, there is no possibility of any fresh demand,” says Babubhai Gujarati, president of Surat Diamond Association, adding that their only hope is a gradual rise in demand and supply of rough diamonds after the New Year vacation.

Diamond polisher Dinesh Patel is also banking on it. “We are hoping that when the jewellery market reopens in Europe and US, new demands would come and the picture would be clear,” Patel says as the couple contemplate selling off their family jewellery to pay for the EMI for the house during the coming months.