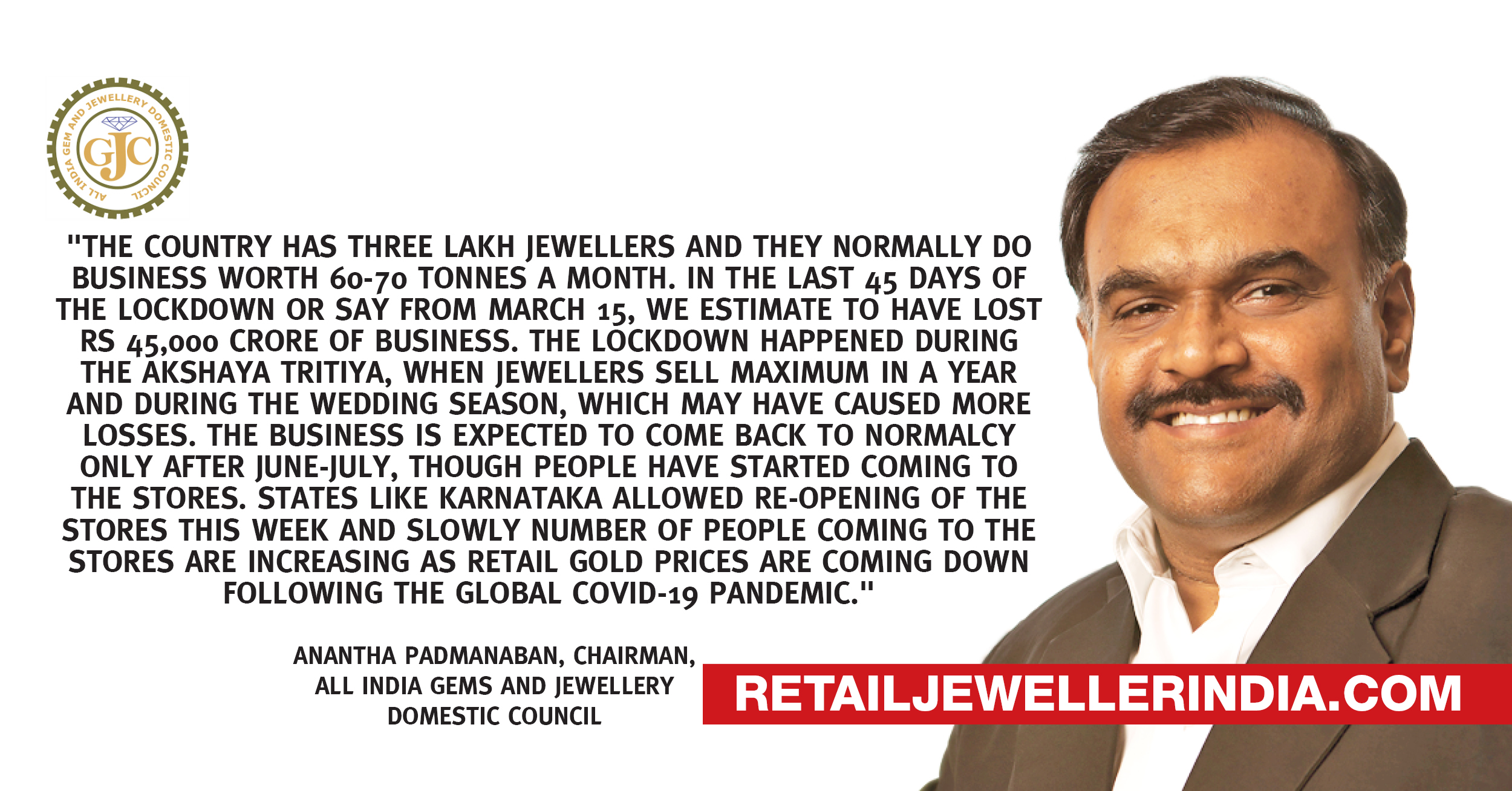 After losing business worth over Rs 45,000 crore in a span of 45 days of lockdown, India’s jewellery industry is set to resume operations from next week in permitted zones in the country.

Kalyan Jewellers on Saturday said it is re-opening 10 showrooms in first phase across three states and one Union Territory in India. These are green zones with less restriction – seven showrooms in Karnataka, one each in Orissa and Assam and one in Puducherry. The company has already started operations in the Middle East, with the re-opening of 9 standalone showrooms in UAE and 3 showrooms in Qatar, since the occasion of Akshaya Tritiya, last week.

“As the lockdown in these countries, coincided with the peak purchase and wedding season, we are expecting the pent up demand for gold to resume, once the lockdown is lifted and the markets open”, said T S Kalyanaraman, Chairman and Managing Director, Kalyan Jewellers.

Tanishq, India’s leading jewellery brand from the Tata Group’s Titan, is also planning to reopen its 328 stores across the country in a phased manner and has announced to reopen first 50 stores from May 10.  East India’s leading jewellery chain Senco Gold & Diamonds has also re-opened 11 stores across green and orange zones in four states of West Bengal, Odisha, Assam and Karnataka, after getting permissions from the respective states.

Anantha Padmanaban, Chairman, All India Gem & Jewellery Domestic Council (GJC) told Business Today.In that the country has three lakh jewellers and they normally do business worth 60-70 tonnes a month. “In the last 45 days of the lockdown or say from March 15, we estimate to have lost Rs 45,000 crore of business”, he said. The lockdown happened during the Akshaya Thritiya, when jewellers sell maximum in a year and during the wedding season, which may have caused more losses, he said.

He said the business is expected to come back to normalcy only after June-July, though people have started coming to the stores. “States like Karnataka allowed re-opening of the stores this week and slowly number of people coming to the stores are increasing as retail gold prices are coming down following the global COVID-19 pandemic, he said. “We hope to get back to normalcy in the short term in a step-by-step manner,” said Kalyanaraman.

However, a worrying factor is availability of artisans as most have returned to their villages in different parts of the country. “Now most showrooms have stocks from prior lock-down period, but it may take another 30-45 days for most of these workers to come back to work”, said Anantha Padmanaban. The industry directly and indirectly employs over one crore artisans across the country.

Tanishq said it will strictly comply with all government rules while reopening and running the stores, besides following a ‘Gold Standard’ safety e-book for the safety and well-being of customers and employees.

Kalyan is going to mandate use of hand sanitisers at both entry and exit points, masks and gloves to all staff members as well as customers, temperature check via hand-held scanners at entry points and regular deep cleaning and sanitisation across showrooms.

This Mother’s Day, Senco Gold & Diamonds invites everyone to wish their moms in a creative fashion