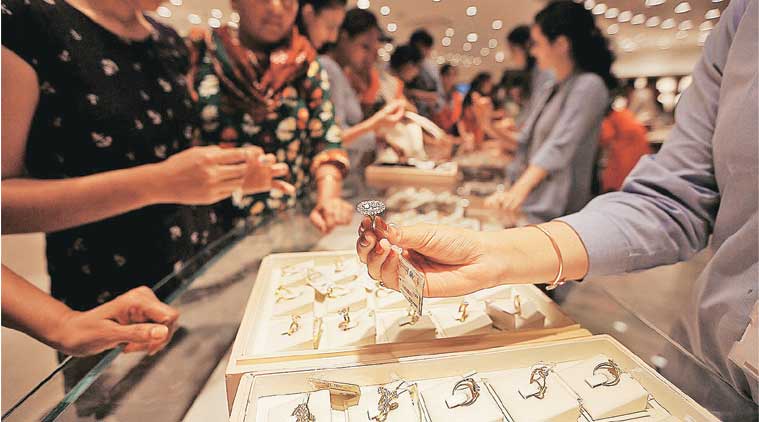 An unusual 40 per cent spike in India’s gems and jewellery imports this fiscal, at a time when exports are flat, has set the alarm bells ringing in the policy circles.

The trend, which marks a contrast from the situation in 2016-17 and 2015-16, when the sector’s imports contracted by 4.9 per cent and 9.37 per cent, respectively, has led to speculation among analysts that there may be cases of capital flight happening through over-invoicing on these imports. The Indian Express has learnt that the Directorate General of Foreign Trade (DGFT) is studying these statistics in detail to prepare a report for commerce ministry.

According to an April 16 Credit Suisse report, “While gold imports volumes have moderated, imports of precious stones and pearls have not. As the latter are hard to value objectively, they hint at capital flight and are worryingly large now particularly given the drop in jewellery exports.” The total imports in gems and jewellery sector were valued at $74.61 billion in 2017-18, as compared with $53.73 billion of 2016-17. In 2015-16, the imports in gems and jewellery sector were $56.5 billion. A senior commerce ministry official, when asked about this surge in 2017-18 imports, said that the DGFT (Directorate General of Foreign Trade) has been asked to study this data and prepare and submit a report soon. “I can talk more when that report comes,” he added.

Retails sales reported by jewellery companies does not reflect the sharp surge in the import numbers. For April-December 2017-18, Thangamayil Jewellery Limited and Tribhovandas Bhimji Zaveri Limited showed a net sales growth of just 9.8 per cent and 0.4 per cent in April-December period of 2017-18, respectively. PC Jeweller Limited saw a net sales jump of 24.2 per cent in this nine-month period. Meanwhile, Rajesh Exports Limited, one of the largest gems and jewellery company that largely relies on export earnings, saw a decrease in net sales by 24.73 per cent in April to December, 2017-18.

In response to specific queries, the Gem and Jewellery Export Promotion Council (GJEPC) told The Indian Express on Saturday that it is “still in process of analysing the data” and it would be able to provide “the desired information after few days”.

The Credit Suisse report had stated that the “March 2018 trade deficit widened $1.7 billion month-on-month and $3 billion year-on-year to $14 billion. Worryingly, jewellery/stones have driven a large part of this increase, hinting at capital flight.”