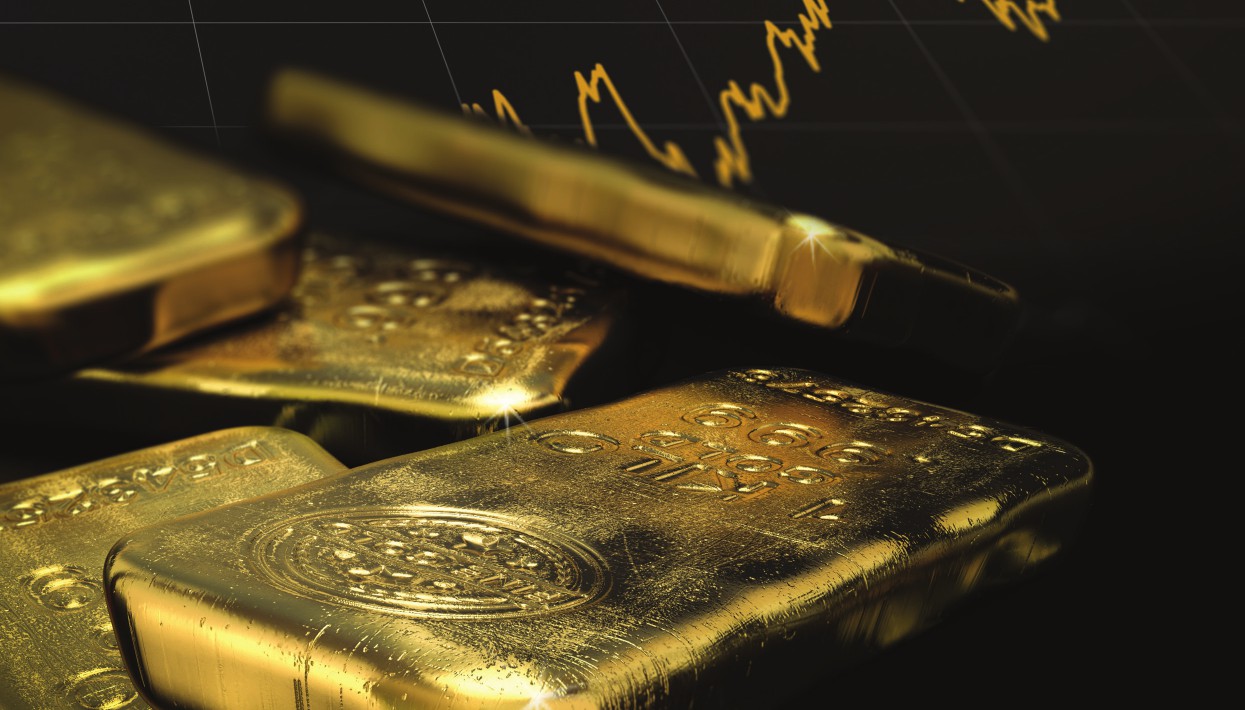 We believe that over the next six to twelve months:
• Financial market uncertainty and accommodative monetary policy will likely support gold investment demand
• Price momentum and positioning may fuel rallies and create pullbacks, as investors continuously reassess their expectations based on new information
• Weaker economic growth may soften gold consumer demand near term, but structural economic reforms in India and China will likely support long-term demand.

Risk off, risk on

The first half of 2019 proved quite eventful for financial markets. Stocks retraced their Q4 2018 losses by the end of April only to pullback again in May.1 A few weeks later, stocks reached new highs yet again. At the same time, central banks across the globe have signalled a more accommodative stance, bringing global bond yields to multi-year – and in some countries, all-time – lows. As investors looked to balance higher stock prices with an increasingly uncertain environment, gold prices surged, making gold one of the best performing assets by the end of June (Chart 1).

And while gold’s price increase in June was particularly sharp – driven by falling rates, higher risk and momentum – investors have generally been more bullish this year. This is evidenced by the positive inflows in gold-backed ETFs, capturing US$5.0 billion or 108 tonnes (t) y-t-d led by European funds,2 – as well as higher net longs in COMEX futures which averaged 369t during the first half. In addition, central banks reported net purchases of approx. 247t, equivalent to US$10 billion, through May3 – continuing their expansion of gold holdings as part of
foreign reserves.

Global monetary policy has shifted by 180 degrees. Less than a year ago, both Federal Reserve (Fed) board members and US investors expected interest rates to continue to increase, at the very least through 2019. By December, the most likely outcome was for the Fed to remain on hold. Now, the market expects the Fed to cut rates two or three times before the end of the year. And
while statements by board members, including Chairman Powell, are signalling a wait-and-see approach, the market has barely changed its forecast. The Fed may not do what the market asks, but it generally doesn’t like to surprise it either. In recent history, the Fed adjusted its funds rate in line with expectations whenever the market’s implied probability of such outcome was 65% of higher (Chart 2); the only notable exception was rate cut announced during an un-scheduled Federal Open Market Committee (FOMC) meeting in January 2008 when the global financial crisis began to unfold.

The Fed is not alone. The European Central Bank’s (ECB) President Draghi recently announced that they are ready to extend bond purchases or cut rates to sustain economic growth. The Bank of Japan (BOJ) is also expected to make policy more accommodative. And emerging market central banks are likely to follow suit.4

The prospect of lower interest rates should support gold investment demand. Our research indicates that the gold price was higher in the 12 months following the end of a tightening cycle.5 Moreover, historical gold returns are more than twice their long-term average during periods of negative real rates (Table 1) – like the one we are likely to see later this year. At the same time, the US dollar – usually a headwind for gold – may remain rangebound as trade tensions and lower rates offset continued economic growth.

*Based on nominal gold returns between January 1971 and June 2019. Real rate regimes based on the 12-month constant maturity US T-bill minus the corresponding y-o-y CPI inflation. Difference from zero computed as a two-way T test at a 5% significance level.
Source: Bureau of Labor Statistics, Federal Reserve, ICE Benchmark Administration, World Gold Council

Risks come in many flavours

Central banks are not acting in a vacuum. Instead, they stand ready to stimulate their respective economies should risks bubble up and a more significant global slowdown occur. These risks include:
• The potential negative long-term effect of higher tariffs amidst trade tensions between the US and its trade partners
• Geopolitical tensions between the US and Iran
• Uncertainty surrounding Brexit and other political and economic concerns in the UK and Europe

In addition, low interest rates are having the perverse effect of fuelling a decade-long stock market rally with only temporary pullbacks. This has pushed stock valuations to levels not seen since the dot-com bubble (Chart 3).
Worryingly, in the event of a recession, central banks –including the Fed – may not be able to rely on cutting interest rates. Instead, they may need to use quantitative easing and, possibly, new non-traditional measures to reinvigorate the global economy.

*As of 30 June 2019. Based on Yale Prof. Robert Shiller’s research. The P/E 10 ratio is calculated by: 1) taking the annual earnings per share (EPS) of the S&P 500 for the past 10 years; 2) adjusting EPS for inflation using US CPI; 3) taking the average of the real EPS figures over the 10-year period; and 4) dividing the current level of the S&P 500 by the 10-year average EPS number to obtain the cyclically-adjusted P/E (CAPE) ratio.
Source: Bloomberg, Robert J. Schiller, World Gold Council

Investors are facing a conundrum. Traditionally, bond holdings provide diversification and hedge their stock market investments. But both high- and low-quality bonds are expensive as yields have generally fallen and credit spreads compressed since 2011. In fact, more than US$13 trillion of global debt is currently trading with nominal negative yields.6 And our analysis shows that 70% of all developed market debt is trading with real negative yields with the remaining 30% close to or below 1% (Chart 4).

Weaker economic growth and the possible impact of higher gold price volatility may result in softer consumer demand this year, especially in emerging markets that make up the lion share of annual demand.7 In addition, we estimate that the recent announcement of a 2.5% increase to gold’s import duty by the Indian Ministry of Finance may result in a reduction to 2019 demand of approx. 2.4%.8 And that, if the higher levy were to become permanent, it could reduce long-term Indian consumer demand by slightly less than 1% per year.9 However, we believe that the broad structural economic reforms being implemented in both

Contrary to popular belief, gold’s performance is well explained by its supply and demand dynamics.

Gold demand is linked to jewellery, technology and long term savings, and these are important determinants of long-term performance. In the short and medium term their impact is felt predominantly when there are significant changes to demand. Conversely, gold investment demand amidst higher uncertainty – including speculative activity –can sway prices in a meaningful way in the short and medium term but its effects level off in the long run. In addition, gold supply through mining or recycling bring balance to the market.

As we look forward to the rest of the year, we believe that consumer demand may be soft and speculative activity could amplify price movements but, overall, it is likely that investment demand will remain robust and central banks will continue their net purchasing trend.

Drivers of gold and its role in portfolios

There are four attributes that make gold a valuable strategic asset,10 by providing investors with:
• a source of return
• low correlation to major asset classes in both expansionary and recessionary periods
• a mainstream asset that is as liquid as other financial securities
• a history of improved portfolio risk-adjusted returns.

These attributes are by-products of the dual nature of gold as a consumer good and an investment (Chart 5).

IGI conducts the Young Gemologist Workshop at the NSCI