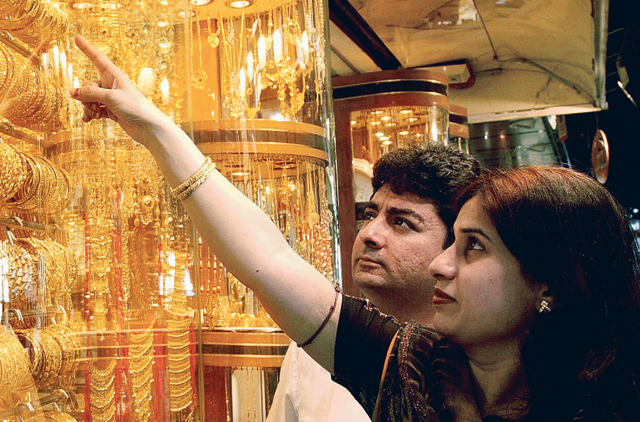 Dubai: UAE’s shoppers are staying away from jewellery stores after gold prices touched record highs – but that doesn’t mean these retailers are losing a lot of money as a result. In fact, the high gold prices are coming to their rescue.

These jewellery retailers are selling part of their gold holdings back to the bullion market and thus cashing out. This has helped them reduce their debts, and in some cases, even helped them turn a neat profit. Gold had touched an all-time of $2,075 an ounce in early August – it’s now at the $1,949 level.

Since June, multiple gold stores have shut down in the UAE, while in other instances, retailers have decided to keep them shuttered until they are able to re-negotiate “better” rental terms with their landlords.

“Because shopper demand is yet to recover anywhere near to pre-COVID-19 levels, many retailers are reducing their in-store stock of jewellery,” said Abdul Salam K.P., executive Director at Malabar Gold & Diamonds. “Retailers had also closed down some stores, and this too has freed up their need to maintain high levels of gold jewellery stock.

“When gold was around $2,000 an ounce, the market saw many retailers cashing out part of these stocks – this definitely helped reduce the debt UAE’s gold trade was carrying. No retailer needs to maintain heavy stocks… for the foreseeable future.”

In fact, top officials at some of the leading jewellery retail networks say their immediate priority is to bring their debts to zero or near that level. And they intend to do so as long as gold maintains current levels. (On Monday (September 14), the Dubai gold price for 22K is at Dh220.75 a gram.)

By end August, Malabar brought its debt commitments down to zero, according to Salam. The jeweler had taken out a Dh500 million syndicated loan in 2017, which involved local and international banks. For the wider jewellery market, the debt drop would be in the 30-40 per cent range.

“The COVID-19 related lockdown significantly impacted tourism and related retail spending,” said Sohal, a former banker specializing in bullion. “Normally, during periods of increased price of gold, there are sales made by consumers as well, thus putting further pressure.

“Since debt is primarily used to finance inventory, it would logically be unviable for retailers to continue to carry large stock-levels and multiple outlets without commensurate sales.

“The rise in price of gold since March 18 (start of the lockdown) has been almost 35 per cent, which is a good opportunity for retailers to sell gold and offset losses on making charges and [store] closure costs. Most forward looking retailers should be actively using this opportunity to re-calibrate their business, close underperforming outlets and become future-ready with the right mix of stores and online offering.”

Sohal’s comments on the state of the gold and jewellery sector resonate loud and clear among retailers. By year-end, more of them will have decided how many of their current store locations should be retained. They are hopeful that talks with landlords to reduce their rental obligations will result in some change in their mindset.

“Many landlords were in denial about the need for rent cuts – hopefully they can see that the gold market is far from recovery,” said a retailer. “The last three months of the year will see some hectic negotiations.”

Will hold on… no matter what

But some jewellery retailers insist they will not be selling their stocks to cash in on the current situation. “Selling off gold to pay off debt makes sense – but Kanz is debt-free and which is why we will hold on to our stocks,” said Anil Dhanak, Managing Director at Kanz Jewels.

“Gold is our raw material – to run a business, we need to maintain a certain quantity of inventory to give as wide a jewellery range as possible. Tomorrow, when the market becomes normal, shoppers will return – at that time, it’s best to have sufficient gold stocks.

“I am not an astrologer – there is not knowing what will be the gold price tomorrow or even weeks from now. I will feel uneasy if I encash the raw material for our business.”

But on this, Dhanak may be among the exceptions. Market talk suggests that retailers continue to divest stocks, on average by up to 20-25 per cent.

‘Zero-debt’ is the strategy that retailers want to pursue – if selling off their gold means they can get to that point, then they will not hesitate.

However, industry sources also strike a note of caution – “Selling gold will only help those jewellery retailers who actually used their loans to buy gold,” said a retailer. “Unfortunately, that’s not the case at all times – some had diverted their debts to finance other activities, such as speculating in real estate.

“If they have done so, today’s gold prices will not help them a bit.”