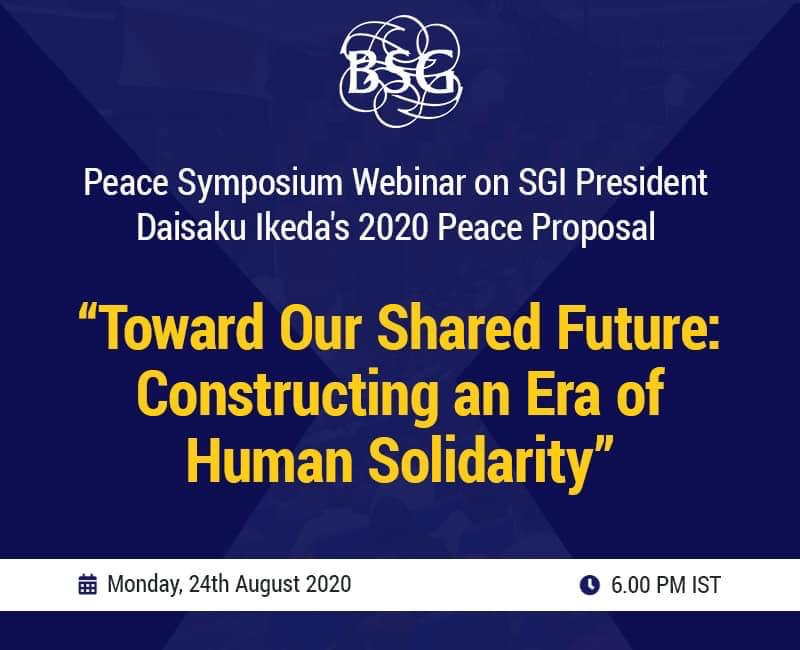 August 24, 2020: In the throes of the century’s worst-ever pandemic that has left a deep scar on humanity, India’s intellectual elite urged a new direction for the world at a symposium on Buddhist philosopher and peace activist, Daisaku Ikeda’s annual peace proposal to the United Nations.

Drawing from a repository of ancient wisdom and compassion that originated in India, Ikeda’s latest peace proposal that is titled “Towards Our Shared Future: Constructing an Era of Human Solidarity,” urges nations to recognize their common heritage to confront issues like natural disasters and climate change.

Ikeda, President of Soka Gakkai International (SGI), submits a peace proposal to the UN every year, outlining pragmatic solutions to vexing global issues such as the impact of global warming and trade frictions.

“The basis for the conscious pursuit of shared living is found in an appreciation that people who live under the shadow of severe threats are essentially no different from ourselves,” says Ikeda.

Speakers at the peace symposium said such global solidarity must begin with rekindling core human values.

“The world today needs youth imbibing the universal human values of truth, love, and compassion, holding the spirit of inclusion, embracing the ones who have fallen down, being sensitive to the environment around, youth who promote harmony and world peace, youth who are good human beings,” said Prof Aditya Shastri, vice-chancellor, Banasthali Vidyapith. He emphasized upon the need for universal education to help bridge any gaps in society.

Keynote speaker Padma Vibhushan Dr Raghunath Mashelkar said, “Disruptive inclusive innovation, which can create the magic of access  equality despite income inequality, will be the way to build our peaceful future.”

In his peace proposal, Ikeda says that the world needs to take a holistic approach to issues such as natural disasters and climate change which force people to abandon their long-accustomed homes.

“Loss of connection to the land and the associated feelings of grief have been an inescapable aspect of major disasters such as earthquakes and tsunami,” he says. “The pain, compounded by the sudden loss of friends and family, can be truly unbearable, and responding to this depth of anguish is an imperative for society as a whole.”

Echoing these thoughts, Rajendra Abhyankar, former ambassador and Professor, Indiana University, Bloomington said, “Only a shared sense of crisis will create conditions for nations and people to work together.”

“You have to ensure everyone you bring on board is gazing outward, in the same direction. That is the task before us, in combating climate change,” she said. “It exemplifies what we know — no one is protected, and everyone has a responsibility. The time is now, and we have to come together.”

Vishesh Gupta, Chairperson, BSG highlighted the importance of sensitizing youth as an imperative to bring about a change. “Young people are the game changers and natural peacemakers. Their power and passion can ignite the path to limitless growth and development for entire humanity towards the endless future”, he said.

Recognizing his contribution to peace, President Ikeda has been conferred with over 800 honorary citizenships. Among the various awards and accolades, he has also been conferred the UN Peace Award in 1983.