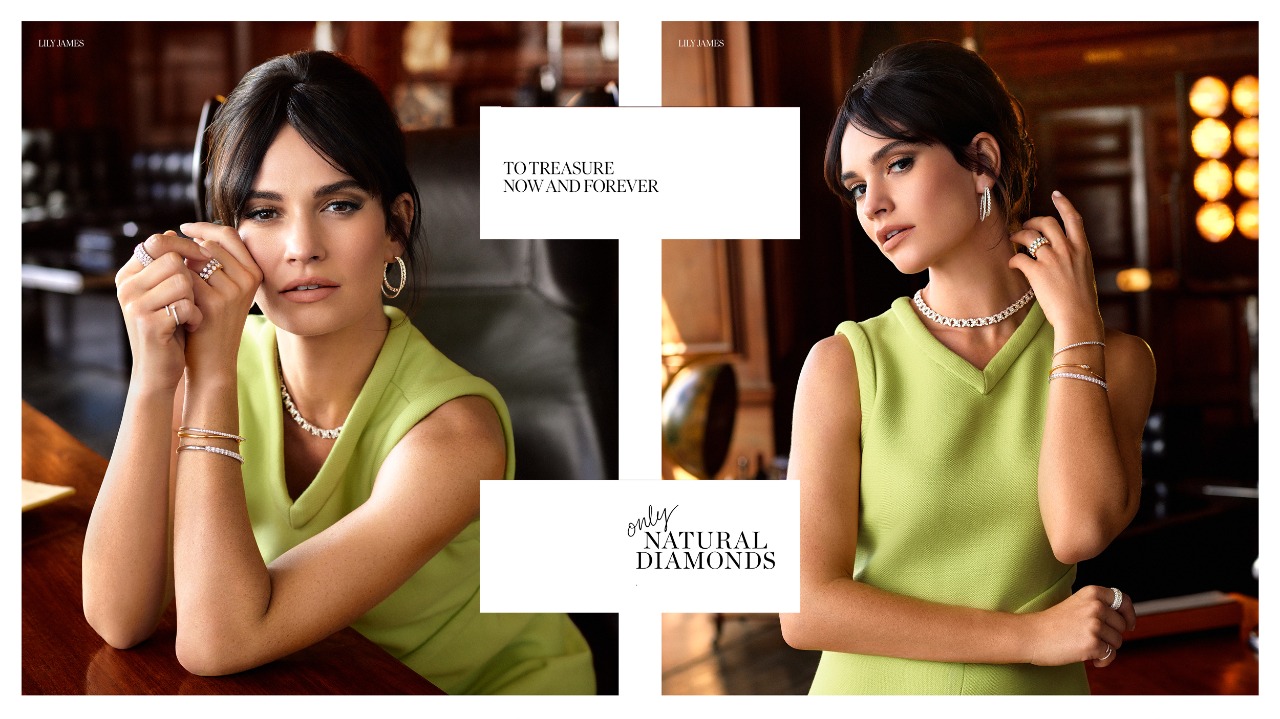 Ms. James has had a diversified, international acting career and has won many hearts with her starring roles in Cinderella and Downton Abbey. She is a celebrated Hollywood star who recently received her first Emmy nomination for Outstanding Lead Actress in a Limited Series for her performance as Pamela Anderson in Pam & Tommy. Ms James’ next feature film projects, Providence, and What’s Love Got to Do with It directed by Shekhar Kapur are currently in production

“Lily James is the modern epitome of natural diamonds,” says David Kellie, CEO of Natural Diamond Council. “With her recent Emmy nomination, Lily has been recognized as one of the leading actors in the world. The talent, versatility, and authenticity she brings to the table are the perfect attributes to represent natural diamonds. We are thrilled to have her join us as we build upon the success of another record-breaking year for natural diamond jewellery.”

“I am so excited and proud to be the Global Ambassador for Natural Diamond Council,” says Lily James. “It has been illuminating to discover the positive impact of the natural diamond industry across the globe and its commitment to continued improvement. I am eager to witness more of this firsthand in my new role.”

Ms. James shines in NDC’s natural diamond universe, serving as the main inspiration for the 45-second campaign film which captures a series of scenes relevant to the myriad of roles Ms. James plays on and off camera. Set throughout London, where Ms. James resides, the film draws the eye to its heroine from street, to set, and to stage. Each moment, whether big or small, is decorated by life’s most meaningful adornments, sparkling pieces of diamond jewellery underscoring the film’s manifesto, “To Treasure, Now and Forever.”

“The power of natural diamonds lies in their magic as eternal heirlooms and symbols of self-expression. Today consumers consider every luxury purchase as a means of showcasing their individuality and diamond jewellery is the perfect way to display the many facets of their personalities. Our latest campaign encapsulates the varied roles that this modern audience seamlessly glides through, while holding on to their roots.” said Richa Singh, Managing Director, Natural Diamond Council, India & Middle East. “Lily James’ sparkling, effortless charm represents the next chapter of diamond jewellery that can traverse various occasions and challenge traditional notions to create the perfect modern heirloom.”

As a brand-agnostic, not-for-profit organization which celebrates the creativity and values of the natural diamond category, NDC’s campaign showcases a range of diamond jewellery styles from staples like tennis bracelets and necklaces, studs and hoops, to original creations including statement earrings or spiral bracelets. All of these pieces were sourced from independent designers, brands, and NDC’s official retail partners who will also run the campaign into 2023 through a co-op advertising program.

Building upon the success of NDC’s previous advertising campaigns, Ms. James wears jewellery specifically created for the campaign that are IP-protected and extensions of bestseller items such as the Soleil pendant, designed by Malyia McNaughton, an alumni of NDC’s Emerging Designers Diamond Initiative, which is now reimagined as earrings and a bracelet. The selection of campaign-specific jewellery pieces are available upon request and can be interpreted by retailers globally. All jewellery worn in the campaign will be showcased in an immersive look book on a dedicated campaign website located on naturaldiamonds.com, which has received over 130 million unique visitors in 2021.

The advertising strategy focuses predominantly on digital video including presence on premium Television channels, leading OTT platforms and across multiple digital avenues. The campaign will also run in the USA, UK, France, UAE, and China.

The campaign was directed by Manu Cossu and photographed by Sasha Marro, in addition to Molly SJ Lowe. Rebecca Corbin-Murray provided fashion styling for Ms. James.

Link to the TVC : https://www.naturaldiamonds.com/to-treasure-lily-james/in/