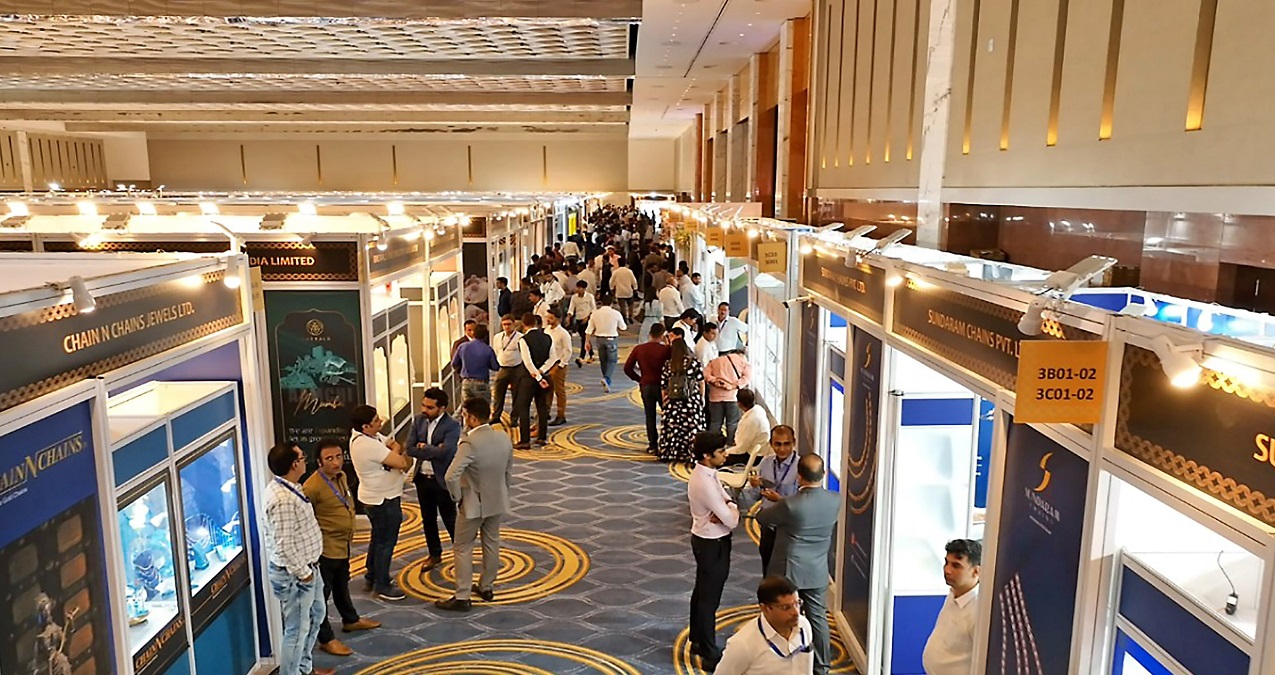 The theme of this four-day exhibition, which ran from 14-17 July, was centered around supporting product launches and trend discoveries, keeping in mind the growth in demand of the sector. Spread across a 300,000 sq ft area and over 600 exhibitors, the show was a culmination of GJC’s roadshows in over 100 cities across the country. Nitin Gadkari, Union Minister for Road Transport & Highways, Government of India, also attended and interacted with the jewellery fraternity at the expo.

According to Ashish Pethe, Chairman, GJC, the whole credit for the success of the show goes to the industry stakeholders, exhibitors, visitors and the GJC team. “This show would not have been possible without the support of our entire COAs. Over the 4 days, we had overall footfall of more than 16,000 visitors and an excellent amount of business has been generated. We have received positive feedback from our exhibitors and visitors,” he said.

Saiyam Mehra, Vice Chairman, GJC & Convener, GJS said that the show floor was buzzing with energy as exhibitors and retailers reconnected with a shared passion for jewellery. “The show has given an opportunity for the retailers to restock their inventory for the upcoming festive season, especially Akshay Tritiya. I want to assure everyone that this show is going to get better and better,” he said.

As it is a new show, Rikin Mehta, Director, Touch 22 attracted a lot of new buyers, as per expectations, as the exhibition happened right after the festive occasion of Gudi Padwa. Touch 22 displayed CZ studded jewellery and gold studded jewellery, and got customers from Central and Eastern India including Madhya Pradesh, Maharashtra, Rajasthan, and Uttar Pradesh.

V Chains displayed new items in lightweight 18k rose gold jewellery in around 2-10 grams. Brand director Vinod Jain said that the sales were impacted due to a short gap between IIJS Signature and GJS this time. On the other hand, Manish Jain, Director, Royal Chains also was happy with the tremendous response from the customers.

Bhavik Shah of RP Ornaments said the show was well-planned and executed by the council. “Everything committed by the organizers was up to the mark. We felt that it was our show. I think this show has set a new benchmark on how to organize a near-perfect show for future B2B exhibitions. The competition for organizing B2B exhibitions got real now. However, I still feel that the response could have been far better if the show was scheduled after the Navratri,” he added.

According to Mohit Prasad from Prasad Jewellers, the main difference between GJS and IIJS was the overall scale of the show.

“Exhibitions like IIJS are much bigger with huge participation of exhibitors and visitors from across the country. Its sheer size and plenty of buying options confuses a local jeweller from a small city. For example, if I have to buy Bombay style gold jewellery, I can easily select from 2-to 3 best available options. However, having too many options makes it tough for me to select and ultimately the purpose of visiting the show is not served,” he said, adding that visitors need to buy within a tight time frame and GJS provided just the right number of limited stalls with quality products to make quick decisions.

Mohit found a good range of lightweight antique jewellery of around 150 grams. He also liked the lightweight 14K mangalsutras displayed during the exhibition.

India is and will remain a gold jewellery market. In keeping with the market demand and sentiment, the show organizers catered to the retailers by focusing on a wide range of gold jewellery offering.

“More than 95 per cent of the stalls belonged to the gold jewellery section, 1-2% loose stone and machinery, and the rest belonged to the diamond section. The organizers have created a benchmark and the wait for the show has finally paid off,” says Siddhanth AVR, Director, AVR Swarnamahal Jewellers. Interestingly, he saw a lot of new creations in fusion concepts. “All the manufacturers and wholesalers hadcreated theme-based concepts with a storyline which enhanced the design story of the collections.”

Retailer also appreciated the ease of visit to the show. Held at a world class exhibition center, retailers found the access (from the entry point to the exhibition) quick and navigation comfortable.

It was a seamless exhibition for Priyesh Nagar, Partner, Jewellers Madanlal Chhaganlal. The absence of parking hassle combined with air conditioned access to the exhibition made the retailer’s experience very smooth. “There were no long queues to the exhibition space or the stalls.

The stalls were well segregated and it was easy to reach out to the vendors. Apart from a few diamond and polki stalls, the majority of the stalls were occupied by gold vendors. We have got a few new gold manufacturers who are doing good work. So, overall the show went well for us,” he maintained.

Besides the novel buying experience, participants also appreciated the on-the-house well-organized lavish lunch meals. Starting the post-pandemic fervour at a new event, GJC has created a new precedent for trade exhibitions on how to delight the visitors and exhibitors in a grand manner.