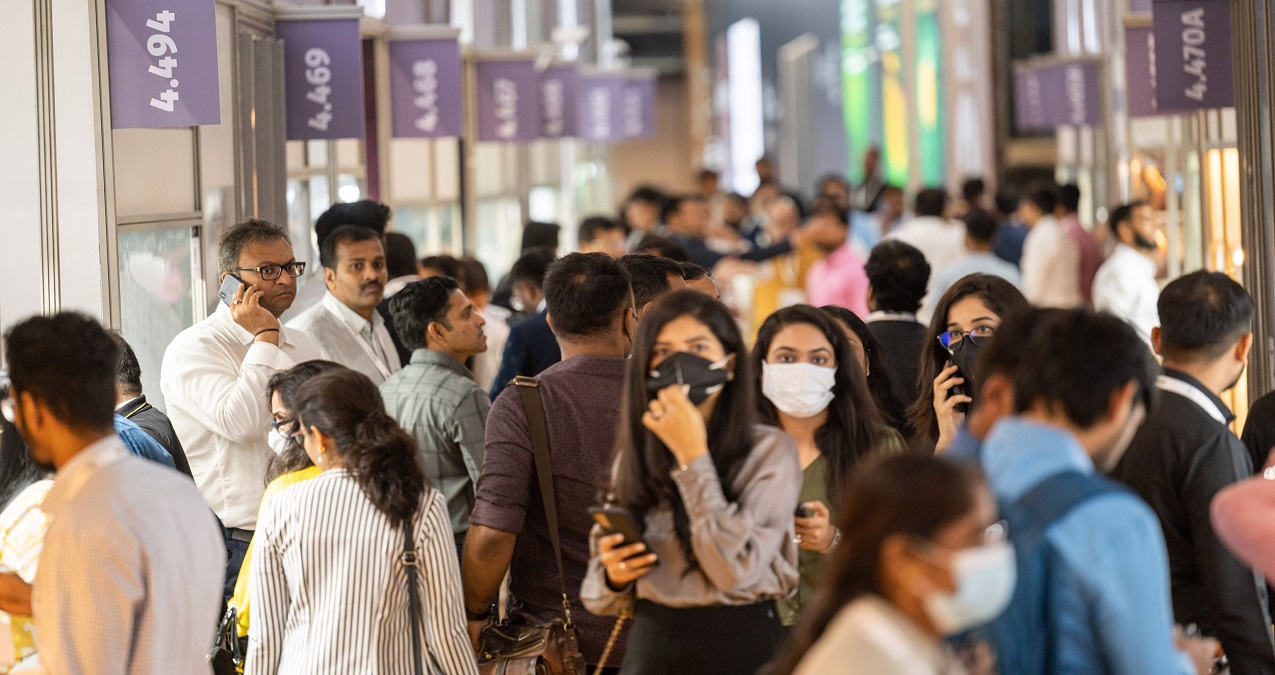 Landmark strategy shifts and series of improvisations aimed at creating greater capacity and a superior experience for participants and visitors is a turning point in the history of the oldest running trade show in India. The Retail Jeweller Reports.

IIJS Premier happened after a gap of two years at the old venue of NESCO, bringing in a lot of enthusiasm and eagerness amongst visitors as well as exhibitors. It was the first show after two years when there is no uncertainty in the market and everybody, including the manufacturers and visitors, were equally bullish for the upcoming season.

The manufacturers who participated in the exhibition knew there was a positive buyer sentiment and that the demand will be high during the upcoming season. For many the response was double this time as compared to the previous Bengaluru edition as “visitors from across the country visited the stalls”, says Rajubhai Mangukia, CEO, of Binnys Jewellery.

As it was the first big show post-pandemic, “we were expecting that the demand levels will reach an all-time high. Although we had a lot of existing customers visiting our stalls, the best part was that a lot of new buyers from Gujarat, Chhattisgarh, etc, approached us during this time,” says Rikin Meta, Director, Touch 22.

The exhibitors are unanimous in their response to the increased visitor flow at the show. Ashish Sand of Savio Jewellery observed that the IIJS Premiere has got bigger, better and grander. “The show has been phenomenal for us. High-quality buyers from pan-India and overseas have met us.”

Parv Agarwal, Director, Sunil Jewellers said that the visitor footfalls were more than 15-20% this time, as compared to the show last year. “I have been able to add a sizeable number of new buyers, especially from South India, which is generally not my regular market,” Agarwal added.

The increased flow is an outcome of the greater than before effort on the part of the organizers to reach out to a larger number of retailers in many more towns and cities. “We tripled the number of roadshows in comparison to the previous years, says Sangani.

Although IIJS always attracts serious buyers, however, the percentage increased manifold as compared to any other year. “We have been able to convert almost 80% of the new buyers who visited our stall which was more than 30% of what we have achieved on previous occasions,” says Sunil Jewellers. ‘IIJS always attracts serious buyers, now they come even more prepared with a proper purchasing plan,” he adds.

Nitin Gulabani, Founder and MD, Nitin Jewellers said the recent exhibition was the best show he witnessed in the last 18 years. “We did not find a moment to rest; people lined up outside my stall to enter.” The energy at the IIJS was high and a majority of the stalls were crowded with visitors.

The retail visitors utilized their time effectively as there were many new exhibitors to explore and interact with. In comparison to the average 1200 exhibitors in the past, this year 1790 unique exhibitors participated in the show.

“The best part this year is that from big chain stores to small independent stores, everyone was looking for exclusive collections, which every manufacturer had showcased,” says Sand.

Abhishek Raniwala, Director, Raniwala 1881, said that the footfall was comparatively more than previous occasions, driving up the demand for good-quality jewellery. Post-covid manufacturing challenges have indeed been far greater therefore, “an overwhelming response from the market motivates a manufacturer to create better designs,” says Raniwala.

Covid-induced market discouraged manufacturers to develop new lines and collections. “Before the show, I was a little worried as the markets have not been very promising post-Akshaya Tritiya. I assumed that the vendors will not put much effort, however, at the show, every player did,” says Saumitra Saraf, Partner, Aisshpra Gems and Jewels.

Retailers observed the manufacturers had worked hard to come up with beautiful designs and collections.  By his own admission, Akshay Verma generally doesn’t purchase much. However, he overbought at the IIJS for the first time. Vastupal Ranka, Director, Ranka Jewellers observed a lot of variety in the designs and noticed lots of new designers. “Many new players had got better designs in comparison to the existing players.”

Sumeet Anand, Owner, Punjabi Saraf Jewellers, said the manufacturers were fully prepared as they came up with abundant stocks. This time, besides the kingly diamond sight holders, a lot of ‘second-level people’ have exceeded the expectations.

Anand makes an interesting observation, “I think there is a clear line drawn between the design approach of those catering to corporates and the mom-and-pop stores.”

The sight holders majorly cater to the large corporate jewellers, creating innovative designs in the lightweight category. In contrast, the other manufacturers are innovating bridal designs aimed at family jewellers. “The latter’s focus on gold weight balanced with design creativity is commendable,” he adds.

Modular jewellery with detachable designs was displayed in large numbers at the show. “In polki jewellery, precious colour stones were mostly used and it was designed in such a way that they looked like modern jewellery. There were also big-sized diamond pendants,” Sumeet added.

According to Shrey Mehta, Director, Pooja Diamonds, a lot of new vendors got a chance to exhibit their collections, which is not generally seen during IIJS. “These young vendors are risk averse and experimentative. Generally, I prefer to work with our existing jewellery vendors, however looking at the collections of newcomers, I have got in touch with a few of them and placed orders.”

Like Shrey, Saraf too was able to add to his vendor roster. “This time, I was also able to add 3-4 new vendors as they offered designs my inventory was lacking. I feel that I’ll be able to offer new variety to my customers this time. Out of the new vendors, a couple of them had a good variety of natural colour gemstones with diamonds as we are trying to expand that inventory,” Saraf said.

“Five days were not enough to visit the show completely. As there were more exhibitors this time, the stock display was almost double that of the Bengaluru edition,” says Amit Bandi, CEO, of DP Jewellers.

Another noteworthy transformation that enabled retailers to discover new vendors and their unique offerings in the show is the uniformity in the display booths. The organizers took charge of manufacturing all booths in a standardized format with a two-fold objective. Firstly, reduce the colossal wastage of material utilized to build extravagant booths. “We wanted to bring more sustainable practices to reduce the environmental impact,” says Sangani. Secondly, level the playing field for exhibitors. “It brings in parity between big and small exhibitors, neutralizing bias based on the build of the booth. The product then is the deal clincher,” he adds. Bandi says, previously, “the stall designs were used to attract visitors. However, this time, the product designs attracted them, which is a welcome.”

Amol Bansal, BK Sarraf Jewellers felt that making stalls uniform was a good move, it provided equal opportunity to all exhibitors to focus on their jewellery.  “Previously, big manufacturers with deep pockets used to design the exhibition stalls which used to undermine the smaller manufacturers. So, this time, the visitors were forced to look inside the booths and explore rather than judge by the grandeur of the booth design,” he explained.

Mr Mangukia, however, has a contrarian view on the subject. Speaking about the stall design in IIJS, he says, “Jewellery if presented well, looks more beautiful. So, stall designs play a crucial role to attract new customers as a well-designed and well-lit stall has the power to draw a customer’s attention. I believe the new stalls killed the beauty of the products.

Commenting on the standard stalls, Shrey said that the decision was a dampener for the exhibitors, as the display area shrunk considerably from the previous editions and they could accommodate only a limited number of customers. However, for a visitor, it was a good thing as more exhibitors could fit into the available space.

Another fundamental change at the show which drew flak from retailers is how different categories of booths were clustered together unlike before when diamond and gold had separate and demarcated display zones.

“Retailers prefer seeing and comparing products in the same category at the time of buying. Every category needs special focus and orientation for buying. The retailers like to examine various vendors, the pricing and innovations before finalizing the purchase,” says a retailer on condition of anonymity. “Every retailer faced a massive challenge locating vendors and finalizing selections due to the random placement of stalls.”

However, “in the past, visitors used to spend the first two days at the show in the gold section,” and diamond jewellery booths were mostly empty. To their advantage, this time, “from the very first day, they saw similar large crowds in the diamond section too,” says Sand.

On the other hand, unlike ever before the silver exhibitors were given a dedicated space. “It is a sunrise category with rising exports and domestic consumption. We had over 200 silver booths at IIJS, and the exhibitors received a very strong response, Sangani.

Pankaj Punamiya, Owner, Leo Silver Art, says, “Silver is the new gold now. We have got a tremendous response this year as the number of visitors at the stall was more than 60% as compared to the pre-covid times. This time all the silver players were clubbed together in one place which I think was hugely beneficial for the customers as they could easily compare collections of different vendors under one roof. We stepped out of our comfort zone and were forced to create something special for the exhibition.”

Echoing the view is Vinayak Dhingra, Owner, Manmohan Exports. “I think the recent IIJS edition was one of the best shows for us in a long time. Apart from my stall, all the other silver stalls in the hall were also fully occupied with clients, which motivated us as a manufacturer.”

Ishu Datwani, Founder, Anmol, Mumbai shared, “I have been attending IIJS since the early 80s. This year was probably the biggest IIJS that I have ever seen. I found the arrangements to be exceptionally good including security checks, the exit, and even the convenient buggy arrangements for commuting across halls. All in all, it was a nice and fruitful experience.”

Talking about the success of the show, Colin Shah, Chairman, GJEPC said, “The show has brought cheer to not just its participants, but also indicated that the festive and wedding season will drive jewellery sales at the retail end. Despite the recent duty hike on gold, market sentiments remained strong towards the yellow metal. With the phenomenal buying that has taken place at IIJS Premiere, there’s no doubt that this is going to be a bumper Diwali.”