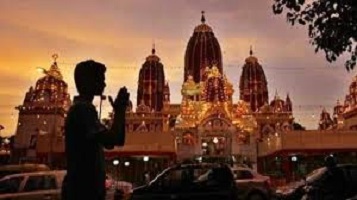 The World Gold Council estimates there are about 2,000 tonnes of gold locked away in temples—worth about $84 billion at current prices.

Groups of men in loincloth are venturing in and out of the deep vaults of the Sabarimala temple as they take stock of the massive piles of gold jewellery, most of it offerings from devotees over hundreds of years.

With even the wealthiest temples finding it tough to weather the financial crisis caused by the coronavirus pandemic, the places of worship are now making contingency plans to pawn their gold to tide over the tough times.

The iconic Sabarimala temple, which attracts around 30 million visitors a year, and 1,247 other temples under the Kerala government-run Travancore Devaswom Board (TDB), are planning to knock on the doors of Reserve Bank India (RBI) for gold loans.

The move, the TDB said, was being planned for some time, but has attained a sense of urgency because of the severe cash crunch. The virus scare has led to devotees largely staying away from the temples for more than five months now, leading to the drying up of cash donations to the temples by devotees.

The crisis may, however, give a renewed push to unlock vast reserves of temple gold in the country. In the past few months, officials of some of the world’s wealthiest temples in India— from Sri Venkateswara temple at Andhra Pradesh’s Tirumala to Sri Krishna temple in Kerala’s Guruvayur—have struggled to pay staff salaries. In May, the TDB had even decided to sell unused “lamps and traditional brass utensils” to generate funds.

“We are in a big crisis,” said N. Vasu, president of TDB. “On 22 August, central government officials held a meeting with prominent temple boards. At least 10 boards participated in it. They encouraged us to use the existing ‘Gold Monetization Scheme’ (made in 2015), where we can avail a 2.5% interest against gold loans deposited to RBI through banks,” said Vasu.

“For the last five months, no devotees were visiting our temples, but we have to spend around ₹50 crore in salaries and others per month. To tide over the crisis, we have in-principle agreed to deposit the gold in the form of coins, bars, and others donated by devotees,” he said. “We expect to deposit roughly 1,000kg. It will take us a month to prepare inventory. Anything of antique value, plus everything used for daily rituals in temples, will be avoided.”

Indian temples are known to possess enormous wealth, mostly in the form of gold. An earlier World Gold Council report said the country has as much as 8.8 million pounds in hundreds of the country’s largest temples.

Despite being the world’s second-largest gold consumer, the country has never been a major producer of gold. To feed the domestic fetish for the yellow metal, India is heavily dependent on imports of thousands of tonnes of gold every year, often from the world’s largest producer, China. The 2015 monetization scheme was developed to include temple gold reserves and help ease the problem.

Sabarimala alone has received donations of as much as ₹3 crore a day, apart from tens of thousands pieces of jewellery, in the few hours it was opened during worship season last year, as per the Board. Its front yard features a mast, covered using 9.16kg of gold.

Unlocking temple gold is fraught with complex problems, ranging from legal barriers to local politics. Deities, legally treated as minors in India who can own property, are represented by an official guardian in most of Kerala’s temples.

Every high-value transaction by such temple boards, known as “Devaswoms” for non-temple uses is criticized by right-wing politicians, as well as needs permission from the Kerala high court.