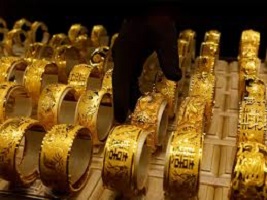 A strong global demand for gold, along with  a depreciating rupee, helped the yellow metal to breach the Rs 50,000-per-10gm mark in Mumbai’s retail market on Wednesday. This is the first time the price of the precious metal, with which Indians associate sentimentally, crossed the psychologically important level.

At the same time, on leading commodities bourse MCX, the price was hovering just below the Rs 49,000 mark for contracts that will expire in August’s first week.

According to data analysed by TOI, gold started moving up only after mid-2018, till when its price was range-bound at Rs 30,000-32,000 for several years. In the last two years, the return from the precious metal has been a staggering 57%. In the process, it has outperformed all other asset classes. The 10-year gilts — with nearly 17% returns — are the next best asset class.

On Tuesday night on the Nymex in New York, gold prices neared an eight-year high at just above the $1,800-per-ounce mark. This helped domestic prices shoot up during the day, market players said. According to Motilal Oswal Financial Services VP (commodities research) Navneet Damani, gold surged to its highest in nearly eight years as mounting fears of a resurgence of new coronavirus cases kept safe- haven demand for the yellow metal alive. This set the precious metal on the path to its biggest quarterly gain since March 2016.

With stocks and bonds as investments not showing much hope for good returns in the next few years, gold stands out as the asset class that could give strong returns, a recent research report by Bank of America Securities said. The report had predicted that by end-2021, the price of gold could rally up to $3,000 per ounce which, when translated into Indian rates, could be upwards of Rs 82,000/10gm at current exchange rates.

The factors that are aiding the gold-price rally are the uncertainties regarding the Hong Kong issue, fears about a second wave of Covid-19 infections slowing global economic growth further and the promise of central banks to infuse money into the financial system to fight the virus infection with a “whatever-it-takes” approach, industry players said. “US treasury secretary Steven Mnuchin and Fed governor Jerome Powell pledged to do more for the US economy as it battles the enormous fallout from the virus outbreak,” Damani wrote in a note.

India: Surat gets Back to Diamond Cutting with Strict Coronavirus Measures