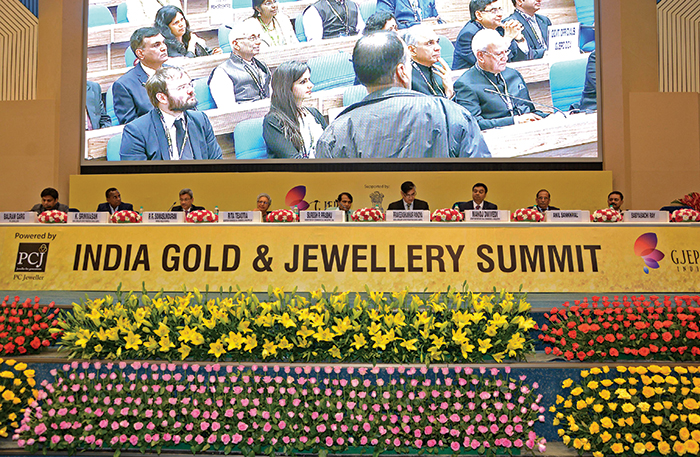 The first-ever India Gold and Jewellery Summit (IGJS) organized by the Gem and Jewellery promotion council (GJEPC) took place in New Delhi on 1–2 December. Held at Vigyan Bhawan, the central government’s premier conference venue, the event was attended by a host of dignitaries and inaugurated by Suresh Prabhu, Union minister for commerce and industry.  The IGJS is intended to take shape as a common platform to address all gold policy related issues and create a vibrant gold industry for all stakeholders of the gems and jewellery industry.

Even “With massive gold reserves [in private hands], India’s appetite for gold is significant,” said Prabhu in his address to the attendees. He affirmed that “The industry and the government will work as partners” to revive the glory of India’s gold sector.

Praveenshankar Pandya, chairman, Gem & Jewellery Export Promotion Council (GJEPC), was the first industry leader to speak. His speech was an introductory overview of the issues to be discussed at the summit.

He was followed by P R Somasundaram, managing director, World Gold Council, India. “Figures state that gold is the second most favourite asset class after fixed deposits,” he said in the course of his presentation. “Needless to say, the need of the hour is a comprehensive gold policy.” The industry, he explained, has reached a stage where it is ready to consider a collective approach to contentious issues.

This approach is only possible when the entire pipeline is in order, said Rita Teaotia, commerce secretary, Government of India. “Impeccable credibility and transparency are a must along the value chain.”

India is jeweller to the world. So the first session of IGJS 2017 was titled “Vision 2022: Indian Jewellery Exports at $25 billion”. It clearly referenced the central government’s avowed Vision 2022 mission statement.

But vision falls flat without finance. And standing in the way of financial institutions is a set of issues that, as P N Prasad, chief general manager, State Bank of India, explained, includes the lack of standards and price transparency in the industry. These must be tackled first, because, as Prasad said, “They affect the integrity of the industry and are a huge deterrent to growth.”

“It’s vital for the sector to highlight all types of designs to the global audience and understand the value of marketing and advertisements. Notwithstanding lofty aims, India has already made an indelible mark in the global market”, feels Shailesh Sanghani of GJEPC.The discussion veered around a roadmap to Vision 2022 and how exports can be bettered for the industry to reach there.

The second session of IGJS focused on “Value addition through jewellery manufacturing”; in other words, how to “up the ante”.

“Design plays a major role,” said K Srinivasan, convenor, Joint Parliamentary Committee, GJEPC, in his address. “It adds value to your brand and helps in long-term sustainability. Millennials don’t like [ordinary, conventional] designs, thanks to their exposure and expectations.”

The gem and jewellery industry today manufactures for and caters to millennials who are putting in a lot of thought into jewellery buying. Retailer and manufactures need to invest in product development to drive design value for the consumers.

Consumers today have more than an eclectic design vision. They also have ample information at their fingertips. Internet-savvy shoppers ask retailers relevant questions about quality, gold rates, pricing, making charges, and so on. “We need to be prepared with replies to every question they ask. If they want break-ups in the invoice, we need to have that ready as well,” said Suvankar Sen, executive director, Senco Gold and Diamonds. Be it standout designs or transparent breakups, consumers are looking for value addition at every step of the way. a

His observations were echoed by Sandeep Kulhalli, senior vice president, retail and marketing, Tanishq. Even with so established a brand, “Consumers quiz us about break-ups.” In the case of gold jewellery purchases, Kulhalli said, this sceptical approach is becoming the norm, whether the individual buyer is urban or rural.

The day when India sells gold jewellery by MRP (maximum retail price), he said, is not here yet. Therefore, he called for a change in the kinds of words and phrases that retailers use in their interactions with consumers. For instance, Kulhalli said, it is vital to lay stress on terms like “making charge” and avoid others like “wastage”.

Session moderator Hundekari stepped in, tongue in cheek, to recommend the use of terms like “design charge” in the break-up — because after all, design is the biggest value add to the metal and is a significant input!

Day two of the summit began with a session titled “Gold policy focus: a view point from policymakers”. The GJEPC’s Pandya presented a list of suggestions from the industry to help the government achieve its Vision 2022.

“We aim to make India the topmost exporter at $25 billion by 2022,” he said. “This isn’t possible without transparent and well-defined gold policies, and sound infrastructure like one-stop jewellery parks where there is ease of functioning, including getting all 22 licences in one shot.”

The foremost deterrent to Vision 2022 is the lack of a structured plan. “The ministries and financial institutions are yet to come together for a long term policy. A structured plan will send out the right message to all transparent players,” he explained, adding, “The grey market must know that gold isn’t available below an officially-set price.” For an industry that employs a mammoth three million workforce, Pandya opined that FTAs need to be closely monitored. “Additionally, we urge the government to take a look at the refund mechanism to aid ease of doing business, easing of sourcing metal, and ease of exporting,” he said.

Referring to the vast Indian diaspora living abroad and making hefty gold purchases during their India visits, Pandya felt that when they made payments through credit card or foreign exchange, it should be booked as exports and retailer should immediately receive the benefit of duty. “Previously, the banks viewed the gems and jewellery industry as a thrust sector but private banks today are charging very high interest rates. Neither do we have credit ratings nor have we asked for subsidies despite being market leaders in segments like diamonds and coloured gemstones, to name a few,” he lamented.

One of the country’s top bureaucrats, Dr Hasmukh Adhia, finance secretary, fielded a range of questions. On the proposition to set up a single body for the industry for instance, he said that “The demand for creating a Gold Board is a welcome suggestion, and I look forward to the Ministry of Commerce and Industry initiating this discussion.”

The second session of the day dealt with the much-debated topic of a “Spot gold exchange for India”. Professor Arvind Sahay, Head, India Gold Policy Centre (IGPC), IIM-Ahmedabad, referred to a paper by the IGPC from two years back about the importance of a reference price for gold. “Look at the Shanghai Gold Exchange for instance, with a massive scale of nearly 8000 institutional representations and 7000 individuals. Only a body of such stature can encourage transparency and make the entire industry look up to it,” he stated. Currently, India has different gold prices across different locations and the real challenge is in formulating a regulatory body. When asked about the relevance of a self-regulated exchange, Dr Sahay said, “India hasn’t yet matured to that – both the industry as well as the government. We need to find another way to push all the relevant arms of the government to get regulations in place.”

On the urgent need for a spot gold exchange in India, Shivanshu Mehta, head–bullion, MCX, pointed out that the spot and futures markets are more interlinked than they appear to be. “Given the history of spot markets, we need a regulator like the [Securities Contracts (Regulation) Act, 1956, or SCRA], along with active participation by banks and other institutions,” he said.

Like Professor Sahay, Mehta highlighted the need for caution: “There must be critical clauses pertaining to linkages between the spot exchange, market participants, the existing futures and options market and the regulatory body.”

The main act of the sixth and final session of IGJS 2017 was a presentation and panel discussion on the Prevention of Money Laundering Act, 2002, (PMLA).

Balesh Kumar, principal additional director-general, Directorate General of Goods and Services Tax Intelligence, spoke on the government’s view of the industry. The PMLA, he said, brings India into compliance with the roadmap of the Financial Action Task Force (FATF), a global inter-governmental policy-making body established to target terror funding.

“Gold is as highly liquid as cash,” Kumar said. “It’s a highly acceptable medium of exchange as well as an investment option, in a country like India. These are factors that make gold very vulnerable to trade-based money-laundering.”

In the question-and-answer session with Kumar that followed, however, jewellers in the audience raised their questions and concerns. One point made by the jewellers was that bullion and loose diamonds are the preferred modes of channelling unaccounted money — not jewellery.

As Nitin Khandelwal, chairman, GJF, said, “No-one wants to park their unaccounted money in a product that attracts 15–25 per cent value-addition.” The consensus among jewellers was that jewellery should be kept out of the purview of the Act.

By all accounts, this maiden initiative of the GJEPC delivered on its promise to keep the platform open to all stake holders of the gold industry for voicing their opinions and pain points to the govt. authorities and seeking its partnership in making Indian gold industry the most skilled, transparent and buoyant industry in the world. Well timed before the budget 2018, the industry stays hopeful of policies which will have long term positive impact on its growth and development.

ALROSA is keen to deepen its trade relations with the gems and jewellery market in India – Jim Vimadalal, Director, Mumbai Representative Office, ALROSA