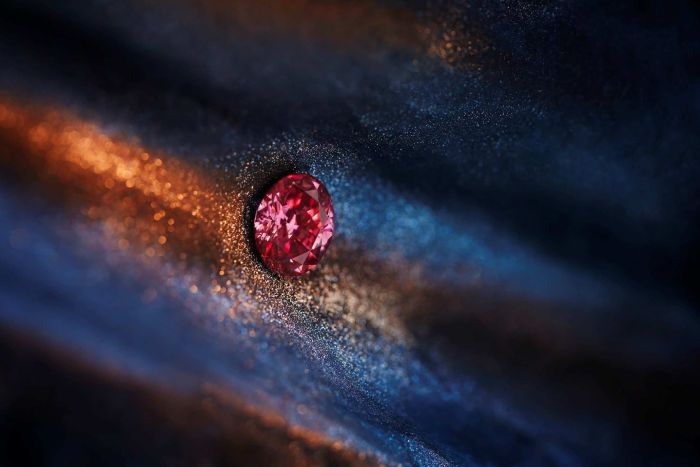 Every year one of Australia’s most renowned jewellers, John Calleija, prepares to go into a bidding war for the world’s rarest and most valuable diamonds from the remote Kimberley.

The Gold Coast-based jeweller who has stores in Australia and London, is one of the privileged few invited to attend the Argyle pink diamond tender, where collectors from around the globe bid on the top pink, red and violet stones.

These are diamonds so rare they never reach the open market.

For every one million carats of rough diamonds produced at the East Kimberley mine, only one polished carat makes the tender collection.

And you need to have deep pockets to afford these rare gems.

“This year we bid on 10 diamonds and we were very lucky to have gotten three,” Mr Calleija said.

A lot of mystery surrounds the tender process; potential buyers place a sealed bid, with the highest bidder notified of their win at the tender deadline.

Mr Calleija said it was always a nervous wait to find out if a bid was successful.

And with fewer than two years of production remaining at the Argyle diamond mine, he said the tender process was getting more competitive than ever.

“This was certainly one of the best tenders ever; each one gets more and more special because it’s getting closer and closer to the end,” he said.

“We’ve had the joy of it for more than 30 years but as they say all good things must come to an end and I don’t know what we’re going to do afterwards, so that’s why they’re so precious.”

Although Rio Tinto has not disclosed the total figure reached by this year’s 55-carat collection, it did reveal the tender reached double digit price growth.

Among the record-breaking diamonds sold in the 2018 collection was the Argyle Muse, a 2.28-carat fancy purplish-red diamond, the most valuable diamond in the tender’s 34-year history sold to an anonymous buyer.

Previously there have only been four red diamonds over one carat offered in the tender.

Mr Calleija estimated the top stone went for between $US10–15 million.

Over the past 18 years the value of Argyle pink diamonds sold at tender have appreciated more than 400 per cent, outperforming all major equity markets.

Rio Tinto copper and diamonds chief executive Arnaud Soirat said these results were a reflection of the supply of these extremely rare diamonds becoming even more scarce.

Current estimates indicate sufficient economic reserves at the mine to support production through to the end of 2020.

With almost the entire world’s supply of rare pink, red and violet diamonds coming from Argyle, speculation has risen on how the closure of the mine will ultimately impact the industry.

There are a small quantity of pink diamonds mined in Brazil and in South Africa, including the almost 19-carat Pink Legacy, which last week set a new world record price per carat for a pink diamond, when it was sold for a whopping $60 million.

But so far nowhere else in the world has produced diamonds as vivid as the pinks from the Kimberley.

A piece of history

Mr Calleija said after decades of association with the pink diamond industry, it would be an emotional time for long-time collectors when the tender called its last bids.

“You know from when Argyle first made that discovery back in the 1980s to where it is now is just phenomenal, it has gained so much momentum over the years,” he said.

“We’ve had so many amazing clients over the years from all walks of life who’ve collected them — from rock stars to opera singers.

“Luciano Pavarotti bought a magnificent pink diamond off me some years ago when he was touring; he wanted to take a little piece of Australia home with him.

“These diamonds become family heirlooms, it is like a piece of history in your hand and it’s something truly to be treasured.”