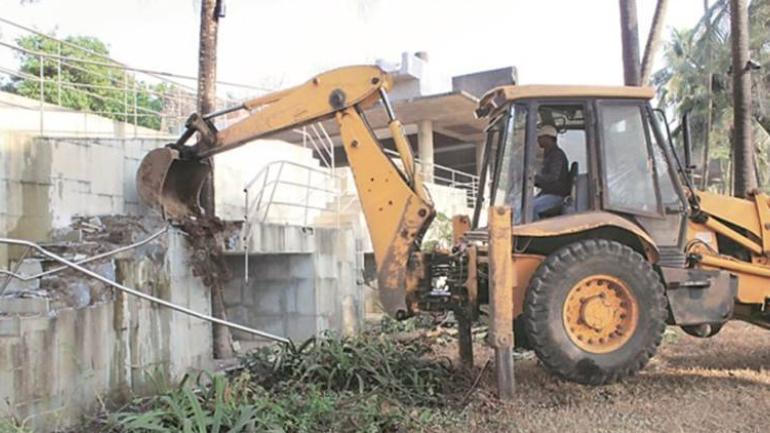 A sprawling sea-facing bungalow in Maharashtra’s Alibaug, estimated to cost over Rs. 100 crore, of fugitive billionaire Nirav Modi was demolished with a huge quantity of explosives today, a district administration officer said.

However, the foundation of the structure was so strong that the authorities had struggled to bring it down using heavy machinery, which would have taken months.

To speed up the process, they decided to demolish the building through a controlled explosion, using dynamite. Raigad district collector Vijay Suryawanshi said the demolition was successful.

Excavators were used to drill into the thick concrete pillars of the bungalow to make space for fixing the detonators. A technical team was then called in to install the explosives. Drone footage released by the demolition team shows the palatial structure where the fugitive billionaire used to throw parties and host product shows, near a forested beach, collapsing in a cloud of dust.

The bungalow was built partly as a ground-plus-one structure and has a driveway, high metal fencing and a huge security gate. It includes a swimming pool, resort-like slides and expensive fittings. Situated at Kihim beach, over 90 km from Mumbai, it was declared illegal along with 58 other structures that flouted all environmental norms.

The demolition was taken up following a Bombay High Court order on public interest litigation (PIL) filed by non-profit Shamburaje Yuva Kranti in 2009, demanding action against illegal bungalows, hotels and resorts violating the high-tide and low-tide zones in tiny villages dotting the beaches of Raigad.

Nirav Modi is one of the main accused, along with his uncle Mehul Choksi, in the Rs. 13,000 crore Punjab National Bank scam. Nirav Modi had initially approached the High Court to stop the demolition as the bungalow was among the properties attached by the Enforcement Directorate after the PNB scam surfaced.

But later, the agency handed over the bungalow to the district administration after removing valuable items.