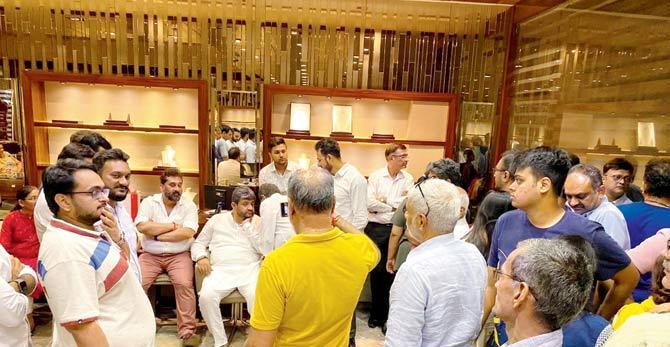 Ghatkopar witnessed high drama on the intervening night of October 30 and October 31, as investors in jewellery schemes thronged Rasiklal Sankalchand Jewellers on MG Road demanding that their money be returned. The investors were led by BJP MP Manoj Kotak and newly elected MLA Parag Shah.

Hundreds of investors have deposited money totalling at least Rs 300 crore in gold programmes of the jeweller. Most of them are said to have made the payments in cash, using which the jeweller bought gold.

Soon, messages started doing the rounds that the jeweller’s stock of gold has dwindled and is now almost zero. Alarmed investors started thronging the store starting from 10:30 pm on Wednesday night. Sources said, the crowd was led by Shah and Kotak and the meeting lasted till 6:30 am on Thursday morning. Sources said the BJP leaders gave the jeweller 24 hours to return people’s deposits, failing which he would be reported to the Economic Offences Wing of Mumbai police.

Ghatkopar resident and advocate Vinod Sampat said he personally knows several of the investors. “People must ensure the safety of their principal rather than greedily seeking higher returns on these schemes. This is particularly true for those who park unaccounted for money with businessmen and jewellers. Dreams of widows, pensioners and others are shattered in the blink of an eye for no fault of theirs.”