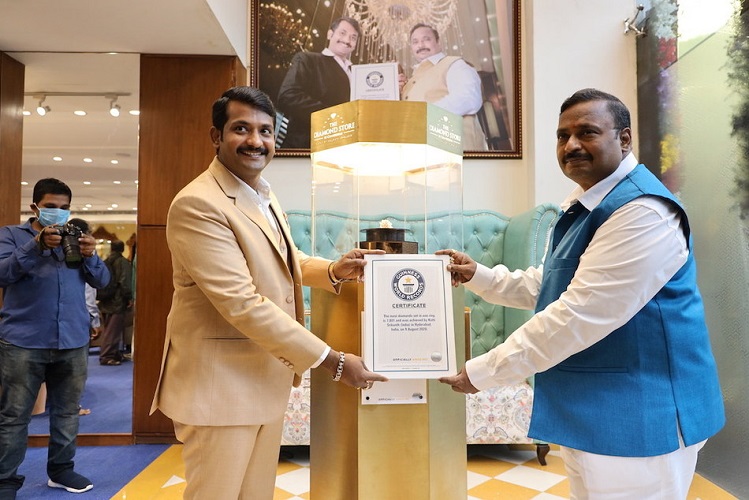 MUMBAI, India, Oct. 19, 2020 /PRNewswire/ — The New Guinness World Record for Most Diamonds Set in One Ring is achieved by Kotti Srikanth, Owner of The Diamond Store by Chandubhai (A unit of Hallmark Jewellers) in Hyderabad. A total of 7,801 natural diamonds have been used in curating the ring named ‘The Divine – 7801 Brahma Vajra Kamalam’. The Ring has been unveiled today at their store. This is the first Guinness World Record in Jewellery achieved in South India.

The name of the ring is inspired from Brahma Kamalam, a rare Flower found in the Himalayas which is considered sacred and also has medicinal properties. Diamond is called as Vajra in Sanskrit and Telugu. The flower was chosen for the design of The Divine Ring as it is a common offering for worship in the most natural and purest form. The ring was conceptualized in September 2018 and it took about 11 months of dedicated artistic effort and craftsmanship for its completion. It has a total of six layers, out of which five layers have eight petals each and the sixth layer has six petals with three pollens in the centre.

The creator of the Ring, Mr Kotti Srikanth says, “I am very honoured and thankful to the Guinness World Records for recognizing my passion to create unique pieces of art in jewellery. It gives me immense pleasure to get awarded at the global level for the masterpiece that I created. This is a big milestone for us. We wish to share this success by auctioning the ring to patrons.”

Kotti Srikanth is an expert jewellery designer with Diploma in Manual designing, Diploma in Computer Aided Jewellery Design from Indian Institute of Jewellery, Mumbai, an MBA from Osmania University, he is also a Certified Diamond Graduate from the Gemological Institute of America (GIA). He attributes his love for Jewellery to his father, Mr. Chandraprakash, under whom he has worked and learned the nuances of the trade.