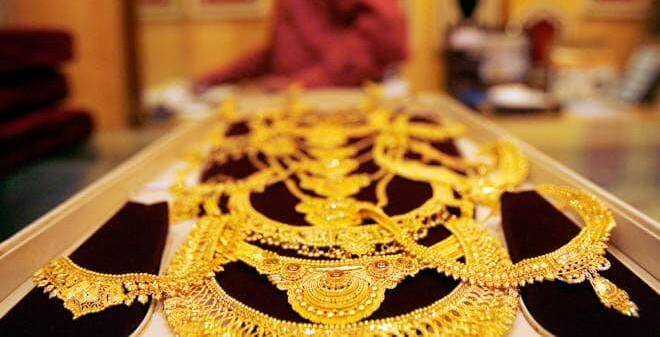 Shares of gems and jewellery companies rallied nearly 11 per cent in intra-day trade on the Bombay Stock Exchange (BSE) on Tuesday despite rise in the price of gold. Among listed jewellery and ornament manufacturing companies, PC Jeweller was the top performer, followed by Tara Jewels, Tribhovandas Bhimji Zaveri, Titan and Thangamayil Jewellery.

Shares of PC Jeweller surged as much as 10.82 per cent in intra-day trade to Rs 34.80 on Tuesday, extending their winning streak to a third straight session. Paring some of the early gains, PC Jeweller shares settled 8.76 per cent higher at Rs 34.15 apiece. PC Jeweller stock has risen 26.48 per cent in the last three trading sessions.

The stock also saw a spurt in volume trade as 9.73 lakh shares changed hands over the counter as compared to a two-week average volume of 6 lakh shares on the BSE.

Gold prices hit a new six-year high of over Rs 40,000 per 10 gm on Monday amid strong demand by jewellers at spot markets as the metal strengthened overseas. The market analysts predict that the yellow metal could soar to Rs 40,000-41,000 in the near future amid uncertainty on the US-China tariff war, volatile oil market. The depreciating Indian rupee also helped the rise in gold prices.

According to analysts, higher gold prices would impact the demand to some extent but Indian consumers do have a special penchant for gold not just for cultural reasons but also for saving purposes.

Gems and jewellery companies like Titan, Tribhovandas Bhimji Zaveri and Thangamayil Jewellery have performed well relatively at a time when auto and consumer companies are feeling the pinch of a consumption slowdown.

Jewellery retailer Tribhovandas Bhimji Zaveri (TBZ) reported a 136 per cent surge in its profit after tax to Rs 3 crore for the first quarter ended June 2019, while its total income grew by 5 per cent to Rs 430 crore.

The Future Place of Synthetic Diamonds in the Diamond Market