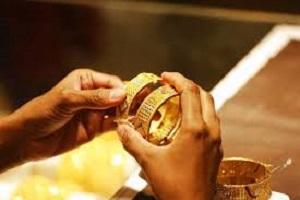 KOLKATA: After months of depressed sales due to the lockdown, India’s gold jewellery trade is showing early signs of recovery, with the metal’s restocking reducing the discount by a quarter to $30 per ounce toward the latter half of the week.

Bullion dealers were offering a discount of $40 per ounce over the official domestic prices until Wednesday. From Thursday, the discount started dwindling as demand picked up for the bullion among the jewellers. Also, a correction in prices of gold from Rs 56,000 per 10 gm in August to Rs 51,000 per 10 gm in September has also attracted end users buying gold for the upcoming festive and wedding season.

“As the festive season is approaching, we are witnessing a gradual revival of demand at the consumer-end. As a result, we have started stocking gold to cater to that demand with new designs. We expect robust demand in the upcoming festive season as far as gold jewellery is concerned, as in the prevailing market scenario, gold has emerged as the safest investment instrument,” said Ahammed MP, chairman of Kerala-based Malabar Gold & Diamonds. “In addition, there is pent-up demand in the market that will hopefully be unleashed in the festive months and upcoming wedding season. We are witnessing demand revival across India at the moment.”

South Indian states are the biggest consumers of gold in the country, accounting for 40% of the country’s annual gold consumption of 800 -850 tonnes.

Ishu Datwani, founder of Anmol Jewellers, said that gold is both an appreciating and easy-to-liquidate asset.
“A closer look at the historical table of gold prices over the years shows that gold has always increased and it is likely to go up even more,” Datwani said. “People who have weddings in the family or who want to buy gifts and other genuine needs will buy gold. We are already seeing clients coming in to buy for weddings in December, January and February. We should be doing good business during Diwali because of the pent-up demand over the last 5-6 months.”

Added Vaibhav Saraf, director, Aisshpra Gems and Jewels: “With the festive season coming and gold buying being an integral part of our festivals, we are optimistic that we will achieve pre-Covid targets. Also, with gold prices softening, we have seen a good increase in demand.”

The price-sensitive eastern market too is witnessing a revival in demand. Suvankar Sen, CEO, Senco Gold & Diamonds, said: “Demand of gold jewellery and diamond jewellery has started picking up due to the upcoming wedding season. However, jewellers will be cautious in restocking as they want to first ensure steady demand from consumers and stability in the economy.”