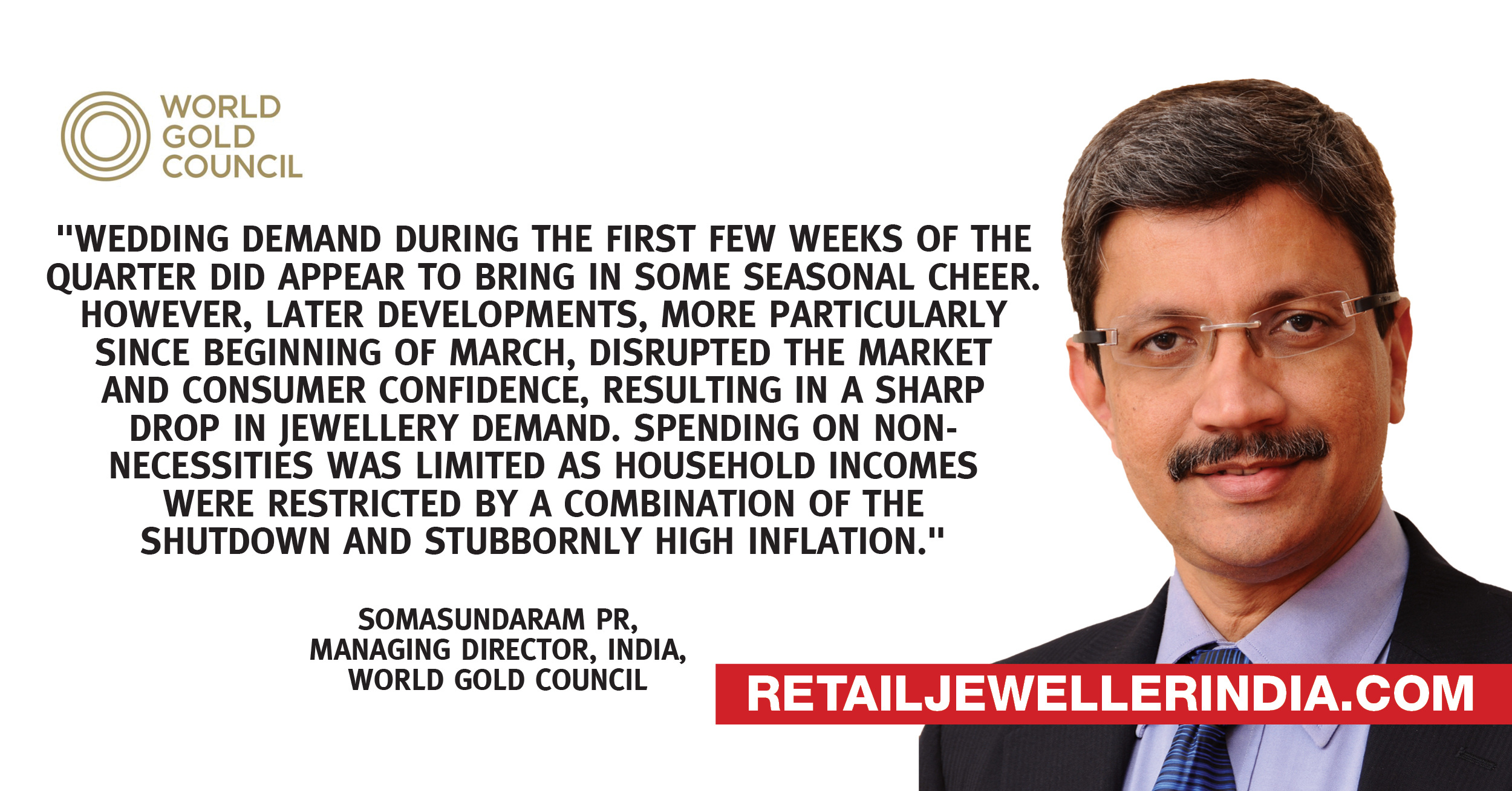 High gold prices, economic uncertainties, and a lockdown towards the end of the Jan-Mar quarter saw India’s gold demand fall by 36% on year to 101.9 tn in Jan-Mar, the World Gold Council said in its Gold Demand Trends report released on Thursday.

Gold prices averaged 36,874.40 rupees per 10 gm in the March quarter, 25% higher than the same period last year. In Jan-Mar, India’s gold demand for jewellery slumped 41% on year to 73.9 tn and investment demand for gold fell 17% to 28.1 tn. Soaring and volatile prices, and the lockdown in mid-March hit demand for bars and coins. “Interest in digital gold products…continued to grow in Q1, as it was obviously easier to buy gold via such platforms.

ETFs in India…saw relatively sizable inflows of 4.4t (tonne) as investors rushed to meet their safehaven needs,” the report said. “Wedding demand during the first few weeks of the quarter did appear to bring in some seasonal cheer. However, later developments, more particularly since beginning of March, disrupted the market and consumer confidence, resulting in a sharp drop in jewellery demand,” said Somasundaram P.R., the council’s managing director for India.

India’s gold dore imports declined to 35.8 tn in Jan-Mar from 67.4 tn during the same period in 2019. Total gold recycled in India in the first quarter was 18.5 tn, up 16% from the previous year as prices hit record highs. “Recycling and collateralised loans against gold may be expected to grow exponentially in the next few quarters as the immediate economic impact of the lockdown becomes evident,” Somasundaram said. Unlike its previous reports, WGC did not give an outlook for India’s gold demand this year. “We are unable to quantify the impact on full year demand as we do not have sight of several critical factors at play under current circumstances,” Somasundaram said. Earlier, the WGC had pegged India’s demand for gold in 2020 at 700-800 tn.

However, it said that consumer sentiment could receive a boost with the arrival of a normal monsoon as predicted by the India Meteorological Department. India surpassed China as the largest gold consumer, as the latter’s demand dropped 80% on year to a 13-year low of 101.1 tn. The COVID-19 outbreak, which took a meaningful hold in January, led to the closure of stores and shopping malls for most of the quarter. “Spending on non-necessities was limited as household incomes were restricted by a combination of the shutdown and stubbornly high inflation. Chinese consumers prioritised expenditure on necessities rather than on recreational items such as gold jewellery.”

China’s investment demand for gold slumped 48% on year to a decade-low of 37.1 tn in Jan-Mar due to price volatility and government measures to control the spread of coronavirus. However, demand has improved slightly as China gradually reopened towards the end of the quarter.