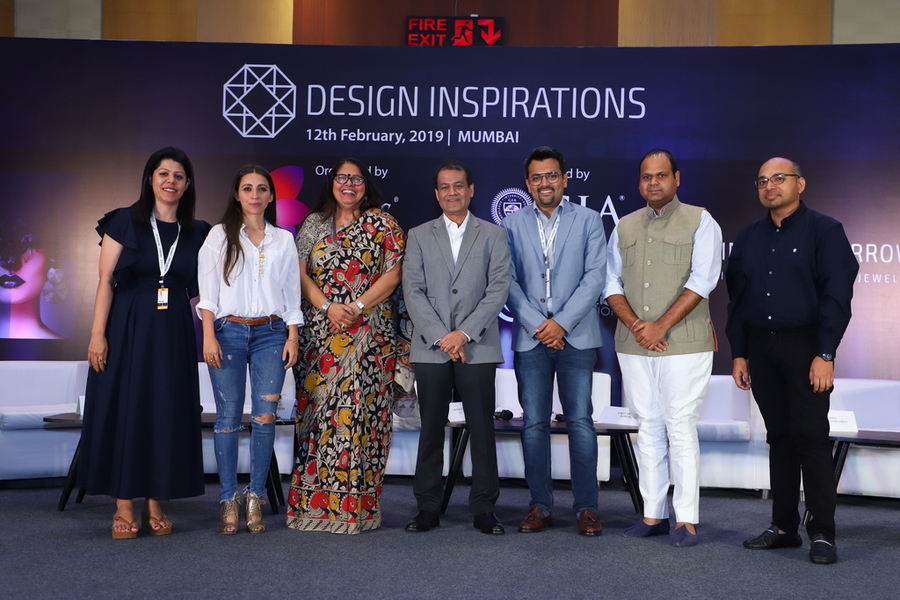 Mumbai: The Gem & Jewellery Export Promotion Council (GJEPC) presented ‘Design Inspirations 2019: Defining the Future of Jewellery Designs’ seminar coinciding with IIJS Signature 2019. Design Inspirations is an initiative to educate jewellers, designers and students about the upcoming trends in gems & jewellery sector in India, Europe and the US. It gave indepth insights into consumer behavior patterns, aspirations, desires, emotions, feelings; and how to translate them into thematic concepts and visual directions.

Addressing the inaugural session, Pramod Kumar Agrawal, Chairman, GJEPC, said, “India is amongst the top 6 jewellery manufacturers of the world and Indian designs are respected throughout the globe. Each State in India has its own jewellery making legacy and has the tradition of passing on skills and styles from generation to generation. However, technology has changed designing and the way we do business. The world marketplace had changed significantly and hence it was essential for the industry to prepare itself for the new era if the country is to progress further and consolidate its position in the international  jewellery market.  It is essential for Indian designers and manufacturers of jewellery to get a firm grasp of design and technology to be able to cater to the consumer of tomorrow.”

International trend forecaster  Paola De Luca, head of The Futurist Ltd, who has been the main speaker at the Design Inspirations series over the years, spoke about the importance of understanding the historical context and analysing the present in order to forecast and cater to the future. “The future starts now,” stated Paola emphatically. Towards this, the GJEPC has commissioned a new trend book she has produced, dubbed “Aatman: Inspirations 2020”, slated to be launched at The Artisan Awards ceremony “To prepare for tomorrow today,” Paola reiterated.

Paola noted that there is a trend to reposition the concept of luxury and jewellery; and felt that India is uniquely positioned to be able to contribute to this. India has had great influence on luxury jewellery historically as evidenced from the creations of Cartier, Van Cleep & Arpels and Harry Winston, Paola noted.

Paola also presented an overview of ‘Aatman – Inspirations 2020’, the GJEPC Trend Book for India. She spoke about the growing importance of India in jewellery design, saying that the country was now poised to once again recapture the premier position in this field which it enjoyed in earlier periods. She turned the focus on India, covering both its rich design heritage and its transformation towards becoming a leading centre of jewellery, both in design and manufacturing.

The book, Paola explained touched upon this glorious design heritage of the country using examples of the rich artistic history of various aspects of Indian culture. It also explored different aspects of the diamond and jewellery industry today, covering diamonds, gold and gemstones, and provided insights from domain experts into aspects of designing such as Branding and Storytelling, the Future of Diamonds and many others.

Paola then took the audience through the Approach and Methodology followed in the creation of design-led jewellery collections. She explained the various steps involved beginning with Research, which included Data collection and analysis, consumer and market insights, design directions, technology and more. Following this the designer needed to apply this information to the particular needs of the company and the market it was intended for, with specific exclusive research required in some cases to fine tune the strategy. Finally, the execution involved creating the design brief, marketing materials and other content that could reach consumers through social media, print, electronic and other channels.

In the last part of her presentation, Paola briefly outlined some of the key trends or Inspirations for 2020 including the relevant design directions. The main themes for the next season in terms of design were defined as:

I-Deco – as culture evolves from the last century to this one, bringing together the old glory with the infinite possibilities of modern technology;

Storytelling –  bringing about introspection between the dreams for the future and the inner spirit and essence of each individual;

Ancestors – with a stress on depicting the past and the mysteries and myths of the stories narrated by generations gone by; and

Self-Expression – creatively interpreting and connecting various worlds, cultures, the real and the metaphysical in unconventional and uniquely individual styles.

Paola concluded by saying that the Indian jewellery industry was today poised to take major new leaps on the world stage and she was extremely happy to be associated with the GJEPC in helping to encourage new talent and give a direction for the future.

The opening presentation during the second half was by Amit Singhee of IBM and focused on the role that cutting-edge developments in the world of computer programming, particularly Artificial Intelligence or AI, could play in aiding jewellery designers. Drawing on design forecasting initiatives taken by IBM with some players in the apparel industry, he said that there were two sources that could supply vast amounts of data to guide the process. The first was trends culled from actual sales that had occurred within the preceding period, which could give valuable insights into what consumers actually desired in terms of colours, price points, materials, shapes and lots more. Similarly, he said, visual mapping of photographs from the fashion runways of the world could provide indications of the new design directions. Both these, which would be laborious and time-consuming processes if carried out manually, can now be accomplished in super-quick time using AI based computing.

Sachin Jain of Forevermark and Richa Singh of Diamond Producers Association (DPA) presented their views on the process of design, the role of designers and the importance of diamonds. Jain, who made a brief presentation, emphasised the role of technology saying it was changing at an exponential rate and opening out immense new possibilities. He advised young designers to realise that ideas were the core driver of new designs, but it was also important for them to understand that simplicity of style, and adherence to cultural specifics of each market were other essential ingredients of success. He also touched upon some of the challenges of creating new concepts and lines of diamond jewellery – while they would need to be trendy, they also would need to bring out the amazing longevity of a diamond, including its past, having been created billions of years ago and its future, as it retained its value over generations, he elaborated.

Richa Singh, who engaged Paola De Luca of The Futurist in what was described as “Real Conversations”, discussed the need for designers to create smaller pieces of daily wear diamond jewellery that could be celebrations of the many small, special moments that loved ones experience in ordinary, everyday situations. She touched upon her organisation’s recent experience in bringing together jewellery designers and fashion designers at the Lakme Fashion Week and said that diamonds are not only decorative, but have a value in projecting one’s image and status as well. She stressed that in addition to catering to special occasions like engagements, weddings and anniversaries, designers must also create collections of smaller jewellery so that consumers could “enjoy the experience of wearing diamond designs every day”.

Tom Moses, Vice President of the GIA spoke briefly about how the research that his organisation was conducting and all the work it was doing was to ensure the intrinsic beauty of jewellery and the  enhance the story-telling around it.

International blogger, journalist and curator of tours to gemstone producing centres, Richa Goyal Sikri gave a masterful presentation on four brands: Amedeo; Fabergé; Dolce & Gabbana; and Caratell. By breaking down how each brand has chosen to construct itself – from identity, through product creation,   to marketing and promotion, Richa provided a fascinating insight into the different routes taken – and therefore available, to those designers, companies and entrepreneurs seriously desirous of differentiating themselves and building a successful brand.

Leading jewellery designer Harshad Ajoomal, owner of the eponymous brand of jewellery, and fashion stylist and Vogue Fashion Editor Priyanka Kapadia discussed wide-ranging aspects of style, fashion and jewellery design. Harshad, with his vast experience and innovative approach to jewellery design, proved to be the perfect quizzer; Priyanka’s own experience as a fashion editor and stylist for the rich and famous, threw up a number of pithy insights. She emphasised the need for jewellery designers to keep track of international fashion trends so as to be relevant to the consumer; and to be continuously flexible to achieve the best results.

Award winning designer and successful entrepreneur Pallavi Foley took the audience on a journey exploring the inspiration and thought behind three of her collections: Wear Your Prayer; Flame of the Forest; and Indian Street.  Her talk, interspersed with audio visual support – including some videos — was a fascinating portrayal of talent. What is striking about Pallavi is that her thinking is as sure and strong as the lines of her designs. She particularly emphasised the need for research and a thorough knowledge of the subject of the design.

Tanishq designer Abhishek Rastogi in his presentation titled “Alchemy” spoke about the magic moment, when it all comes together for a jewellery piece. He stressed that   technology could add a lot to the efforts of a good designer. He gave several examples of how a particular problem has been solved by working on the technology front.  He advised designers “to get their hands dirty” by working hands-on on a piece, and exhorted that they ask the heads of their companies to set up work benches for them.

The first half of the day concluded with a panel discussion. Extremely successful first generation jewellery entrepreneur Colin Shah of Kama Schachter, who is also the Vice Chairman of GJEPC  was  the hotseat as moderator. His vast experience and visionary thinking helped draw out various  important aspects from the panelists. Shah  was joined on the panel by jewellery designer Priti Bhatia; Pallavi Foley; Nirupa Bhatt, Managing Director of GIA, India & the Middle East and President of the Women’s Jewelry Association, India; Ankit Mehta of H. Dipak, and the founder of several other enterprises including the 3-D design company Imaginarium; Yash Agarwal of Birdhichand  Ghansyamdas; and Abhishek Rastogi. Agarwal who described his jewellery as “translating traditional designs into today’s pieces”, said that risk taking was inherent in trying to innovate and all those wishing to be successful must be prepared for it.

Ankit Mehta pointed out that he was neither a designer, nor in the strict sense, a manufacturer of jeweller. He described himself as a manager of a platform, and stressed that the industry needed “good platform managers” to bolster both design and manufacturing. He emphasised  the importance of having  sound processes in place, so that the jewellery which is produced satisfy all the three important requirements: desirability, feasibility and viability.

Nirupa Bhatt said that first and foremost it was important for every designer to define her/or himself, to understand what their strengths were and what they would be best be able to excel in. She also emphasised the need to create relationships and work together in a collaborative manner so that the best results were obtained.

Pallavi Foley spoke about the freedom to explore, letting the imagination soar beyond all boundaries, as the critical factor for originality. But, she stressed, it was very important and critical to be aware of all things around you. She said that it was not merely enough to look at a motif as a design element but to understand its essence.

Priti Bhatia also highlighted the collaborative aspect of design and producing jewellery. She said that by treating her employees as colleagues and equals, she had been able to unleash greater productivity, and greater product excellence.

Related Topics:Design Inspirations 2019GJEPC
Up Next