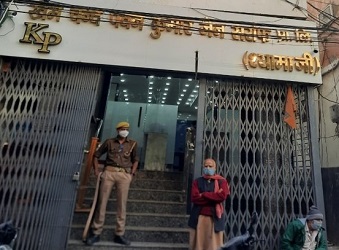 Shyama Jewelers has a residence on West End Road. There are two shops in Sadar Bazar. The income tax team reached both places at 7 am. At that time there was an employee at the shop. The owner of the establishment Pawan Jain initially protested. The Income Tax officials told all the evidences that they should be allowed to do their work. The team has taken everyone’s mobile. In the case of tax evasion, the team is digging records and stocks. The entire matter is being looked at from Kanpur. There are six deputy directs with the team. Those who are sending the report to Kanpur. Officials are still refusing to disclose anything.

One of the two Shyama Jewelers shop in Sadar has been renovated. Which was to be inaugurated after worship on Thursday. The team had to stand out for some time due to worship.

Traders are opposing the action of income tax. The business leaders who reached the spot said that the merchant should not be exploited. Some traders have also met Pawan Jain.

Revenge buyers from US, China put the glint again into Surat diamond trade