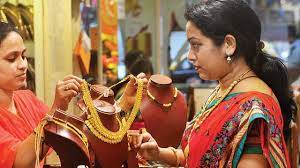 As gold crosses Rs 53,000 per 10 gm mark following the war between Russia and Ukraine, people are cancelling their orders placed with the jewellers or postponing purchases they had planned for the marriage months of April and May.

Leading trade bodies said small-budget weddings are being postponed as families are waiting for gold prices to cool off. This trend is more visible in South India, where gold is an integral part of the wedding. “Gold business in Zaveri Bazaar, the largest gold hub in the country, has come to a standstill as the price of the yellow metal has gone up steeply. People are cancelling orders which is forcing the retailers to cancel the orders they have placed with jewellery manufacturers and wholesalers,” said Surendra Mehta, national secretary, India Bullion and Jewellers Association (IBJA).

In the last fortnight, gold prices have gone up 7.38% from Rs 49,938 per 10 gm to Rs 53,595 per 10 gm, pinching the pockets of the consumers. B Sabarinath, president, Coimbatore Jewellers Association, said many families in Tamil Nadu and other parts of South India are postponing weddings by two months as their budget is going haywire.

Trade bodies indicate that nearly 15-20% of the marriages have been postponed due to the rising gold prices. “Small-budget weddings are largely being postponed by two months as families are waiting to see what happens at the Russia-Ukraine front. They are hoping for war to come to an end at the earliest so that gold prices come down and stabilise at a level, giving them the chance to purchase gold. Marriage without gold is not a common practice in South India,” B Sabrinath said.

South India continues to be the largest consumer of gold in the country, with the four southern states accounting for over 40% of India’s overall annual gold consumption of 800-850 tonnes. Tamil Nadu leads the race in gold consumption, followed by Kerala.

B Muthu Venkatraman, owner of Mahalakshmi Jewellery and a leading south- based gold manufacturer, said orders from retailers and wholesalers dried up once the prices started moving up.