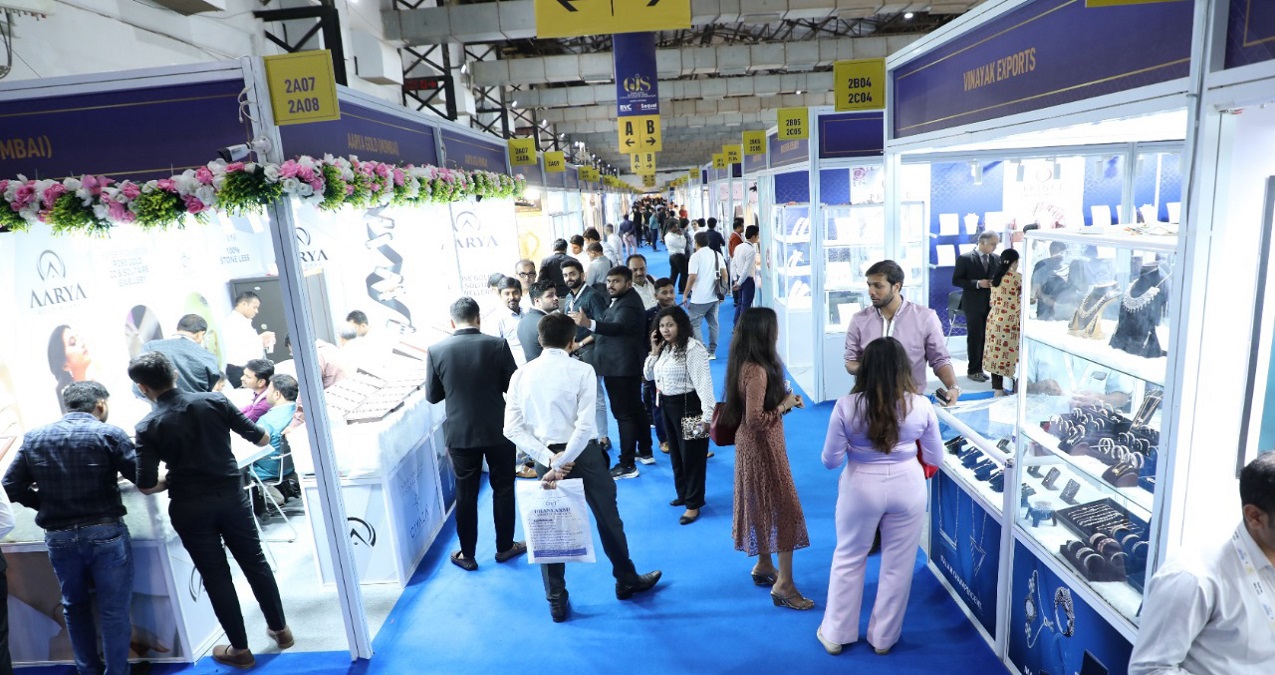 The debut edition of the Diwali edit of the Gems and Jewellery Show heralds a new beginning for the industry even as it opens a new door of opportunities for scores of manufacturers, who are first-time participants in any trade show.

The Gem and Jewellery Council recently held the Diwali Edition of the GJS Expo at the Bombay Exhibition Center, Mumbai.  The show was timed to meet the retail inventory requirement ahead of the industry’s peak business season. The show attracted more than 400 exhibitors, spanning an area of 2,00,000+ sq ft.

As a service to the industry, the show organisers focused on bringing to the forefront hundreds of such manufacturers who have so far shied away from participating in trade shows. “As compared to the last edition, this show was organised in a much bigger venue, due to which the number of exhibitors was also more this time,” says Saurabh Gadgil, MD and CEO of PNG Jewellers.

Unsurprisingly, most such manufacturers came prepared with a wide range of jewellery. Much of it in gold and ready for delivery as the show was timed to fill the gap in inventory ahead of the Navratri and Diwali sales.

Given that Indian jewellery demand is still dominated by gold, Suresh VN, DGM-Jewellery, Joyalukkas, said, “I think the show’s timing was apt as Diwali is just around the corner and thus, a perfect time to procure gold jewellery. Most exhibitors had a wide variety of gold jewellery, and I think GJS can become a unique platform for gold jewellery.”

Vinod Jain, Director of V Chains Jewel, who launched 18K rose gold jewellery, says, “There was heavy demand for readymade jewellery as the buyers wanted to stock up inventory before the festive season.”

Deepak Choksi, Director of CVM Jewels, said, “The show attracted regional retailers from small towns and cities, who did not visit the IIJS and came for only this show. As the festive season is around the corner, we expected that the ready stock would get a good response, and we were proved right.”

Keeping the festive season’s demands in mind, CVM Jewels from Rajkot launched lightweight gold jewellery for everyday wear and gifting purposes. “Although the Diwali edition of GJS was shaped up as a gold-dominated show, our uncut diamonds also received a good response,” claimed Choksi.

The GJS show is a niche and premium event with select exhibitors. While maintaining exclusivity, on the one hand, the organisers presented an opportunity to never-seen-before manufacturing companies. On the other, they worked equally hard to reach out to retailers from the hinterlands who do not frequent industry trade shows. According to Choksi, “The show attracted regional retailers from small towns and cities who did not visit the IIJS and came only for this show.”

Though the show didn’t boast of high footfalls, it staked claim to quality attendees. Rajendra Zaveri, Director, RBZ Jewellers, said, “Though the footfalls were limited, we have got genuine buyers this time, and a good response for our antique Kundan polki jewellery.”

Deepak Seth, Director of SK Seth Jewellers, who does intricately handcrafted gold jewellery, said, “The show performed above my expectation, despite being too close to the main season and buyers having already stocked up for the festive occasions.”

Suresh says, “GJS is a second option for jewellers to explore more exhibitors who either do not participate in the IIJS or could not be visited at the IIJS show.”

Echoing the same opinion, Bharat Sheth, Managing Director, Batukbhai Sons Jewellers, says, “I have observed a lot of new players who were not seen during the last GJS show. I have seen a lot of good collections in colour stones and temple jewellery. I have made purchases keeping in mind the upcoming wedding season, which will start after Diwali.”

The problem of plenty

Like many others in the industry, Anand Pednekar, Director, Anand Jagannath Pednekar Jewellers, feels that the number of shows has increased considerably post covid. As a retailer, “ we now have to make a choice.”

Gadgil opines, “As an industry, we need to think if we need so many trade shows. Retailers cannot possibly visit so many shows. In my opinion, rather than organising one show after another, the Council should try to promote the category to consumers.”

Jewellery retailers have also started observing that when shows happen in quick succession, manufacturers present more or less the same inventory, defeating the very purpose of the show. Manufacturers such as Choksi also believe that due to multiple shows within a span of weeks, there were fewer footfalls as many jewellers had already ordered in the previous shows. Also, “many clients could not make it to the show due to their preparation for the festive season,” says Zaveri.

“Overall, I think it is an outstanding effort by the Gems and Jewellery Council to organize the show”, says Shekhar.