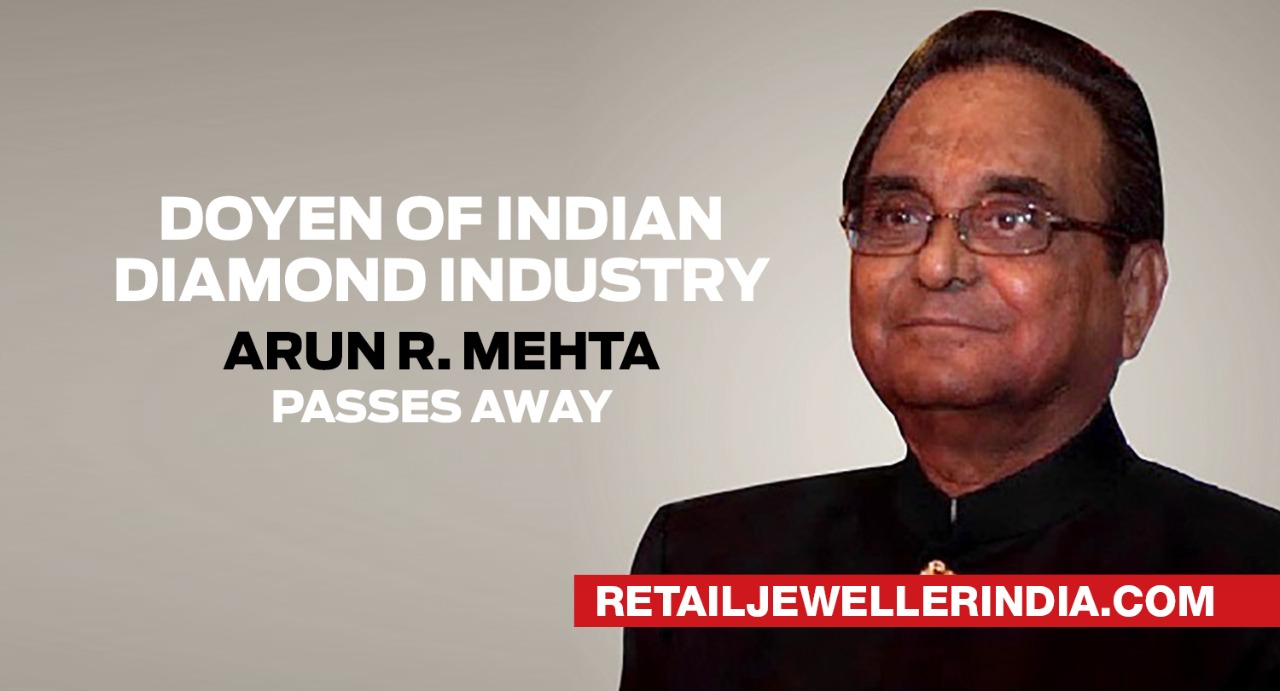 Mumbai: It is with profound sadness that we wish to inform you about the passing away of Arun R Mehta. Arunbhai, an industry stalwart and highly respected community leader was a guiding force and mentor to many. He was 80 and is survived by his wife Rajnika, son Russell and daughters Amita Samir Mehta and Alpa Nishit Kothari, his daughter in law Mona, and sons in law Samir Mehta and Nishit Kothari, along with many grand and great grandchildren.

The history of the Indian diamond industry would have been different without Arunbhai’s key contributions. In the late 1970s he was one of the pioneers of its modernization and rapid growth phase, allowing him to not just grow the company he founded – Rosy Blue – but also the industry as a whole. With his vision and business acumen, he was able to seize opportunities but above all else he always prioritized high integrity and business ethics, helping the industry, like Rosy Blue, gain a favourable and trustworthy reputation. His participation and efforts in a number of trade organisations contributed immensely to the growth of the whole industry. He was a member of the Managing Committee of the Bharat Diamond Bourse for a long period. He was also associated with the Bombay (now Mumbai) Diamond Merchants Association and a member of the Working Committee of The Gem & Jewellery Export Promotion Council for over 20 years.

Arunbhai will not be remembered only for his business prowess; over time, his experience, wisdom, honesty and most importantly willingness led to him becoming a mentor and contributing to the training and guidance of several of our country’s leading diamantaires. His approach was practical, simple and effective, leading him to be one of the most sought after advisors and problem solvers be it for personal or professional issues, and it is testament to his immense humility that he never declined to support someone who sought his counsel. For those who knew him, he was always a phone call away: no problem or discussion was ever delayed or avoided.

Arunbhai lived a life of service which in later years became dedicated philanthropy. He supported causes like education and medicine, and as a devout Jain, encouraged religion as well. Many of his endevours were focused on the growth and development of the Banskatha region, and the Palanpuri community as a whole. Notably, he served as Chairman of Palanpur Samaj Kendra, Mumbai and of Vidyamandir Trust, Palanpur for several years, and he was also associated with Sir Kikabhai Premchand Trust, Banaskatha District Kelavni Mandal and the Gem & Jewellery National Relief Foundation.

Arunbhai leaves behind a legacy of integrity and of service, and the industry will always remember him for his personal and professional contributions, and the values he lived his life by.

May his soul rest in peace. Our prayers are with his family at this difficult time.