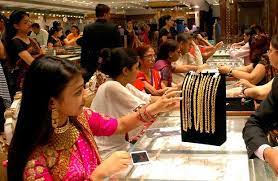 “The sales have remained phenomenally good as a lot of people have purchased gold in big numbers. Such muhurat of Pushya Nakshatra came after many years. An estimated 60% customers bought jewellery whereas the remaining bought coins and bars of gold,” said Jigar Soni, president, Jewellers’ Association of Ahmedabad (JAA).

“A lot of investors who put money in gold had pre-booked bullion. People realised the importance of gold as an asset during the pandemic period and therefore, investors who diversify their investment portfolio, never part with gold,” Soni further said.

The high price of gold was no more a dampener for purchases. Gold price settled at Rs 49,700 per 10 gram in the Ahmedabad market suggest estimates by bullion traders.

Besides gold, even silver demand remained buoyant with a lot of coins, bars, artefacts and light-weight functional and designer jewellery being purchased. JAA estimates indicate that some 40kg gold was traded on Pushya Nakshatra last year in the city. This means sales have increased 450% against the pandemic times. However, this year’s muhurat sales on Pushya Nakshatra raced ahead of pre-pandemic period too. Pushya Nakshatra gold sales increased 76% against 2019’s festive muhurat backed by buoyant purchases and pent-up demand.

Gold demand remained buoyant in other cities as well. With a slow start in morning, the sales of precious metals picked up in the afternoon in the Diamond City of Surat. Office-bearers of Jewellers Association claimed that city jewellers did business of Rs 80-100 crore on the auspicious day of Pushya Nakshatra. The overall market situation is better than 2019 say leading jewellers. The sales on Thursday included gold, silver and other precious metal jewellery and bars.

“The market is improving and we are much better compared to 2020. We are also doing good in comparison to pre-Covid period as well. We hope good business in the upcoming marriage season as people have savings of the past 18 months and a portion of it will definitely go to buying precious metals,” said Salim Daginawala, president of Surat Jewellers Association.

The gold jewellery selling in Rajkot is around 75 to 80 kg in one day on Thursday on account of Pushya Nakshatra according to jewellers. Mayur Adesara vice president of Indian Bullion Jewellers association (IBJA) said “This year the small buyers who want to by two to five grams also came to market. There is heavy rush of customers at all the jewellers. Last year there was very negligible sell because of Covid but if we compare with the year before, there is 60% increase in sales this year.”

Vadodara however, reported slow uptakes. Raghav Chavan of Vadodara-based Prakash Jewellers said, “The sale on Pushya Nakshatra is less this time as compared to last year. Our business is about 40% down this year. It is possible that many didn’t buy gold as it is month-end. People must be waiting for their salaries or bonuses. So, we are expecting the sales to pick up on Dhanteras.”

The purchase of wedding jewellery largely drove the demand for gold on Pushya Nakshatra. However, these were largely pre-booked orders for which delivery was taken on this day, suggest jewellers.

“Besides wedding jewellery, the demand for lightweight functional jewellery was a hit. Younger generation focuses more on design and less on the carat value of gold. Therefore, trendy designs in 18- and 22-carat gold in addition to rose gold jewellery and diamond as well as silver jewellery sales remained good,” said Ashish Zaveri, a city-based jeweller. “We had already received a good number of pre-bookings for deliveries on Pushya Nakshatra. People also made ‘shagun’ purchases and booked bigger orders for wedding jewellery today,” Zaveri further added.

Kalyan Jewellers recorded a revenue growth of 61% and posted PAT of Rs. 69 crore in Q2FY22