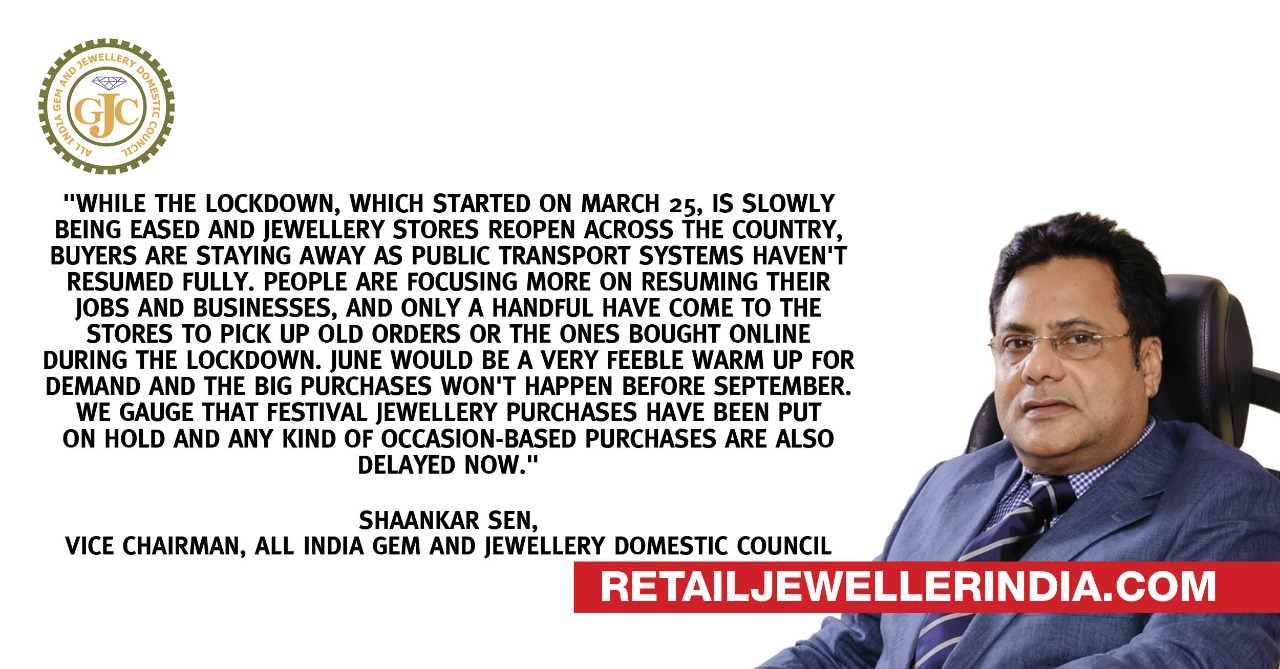 Mumbai: Demand for gold in India is unlikely to revive before September even as jewelers slowly reopen their stores after the world’s biggest lockdown.

Consumption in the world’s second-biggest user came crashing down in the first quarter, hit by high prices and slowing growth. With a more than two-month-long lockdown pushing the economy toward its first annual contraction in at least four decades and shops closed for most of April and May, sales may be hit further.

While the lockdown, which started on March 25, is slowly being eased and jewelry stores reopen across the country, buyers are staying away as public transport systems haven’t resumed fully. People are focusing more on resuming their jobs and businesses, and only a handful have come to the stores to pick up old orders or the ones bought online during the lockdown, according to Shaankar Sen, vice chairman of the All India Gem And Jewellery Domestic Council.

“June would be a very feeble warm up,” for demand and the big purchases won’t happen before September, Sen said by phone from Kolkata. “We gauge that festival jewelry purchases have been put on hold and any kind of occasion-based purchases are also delayed now.”

Sen, who is also the managing director of Senco Gold & Diamonds, said his company has reopened more than 70% of its 110 stores spread across 17 states.

The lockdown led to negligible sales even on occasions like Akshaya Tritiya, the second-most auspicious day to buy gold in the Hindu calendar, according to Care Ratings Ltd. Near-term prospects for the industry aren’t too bright owing to expectations of rising prices of precious metals, and the economic slowdown negatively impacting disposable incomes, it said.

“Customers now prefer to visit stores without their families,” said Ahammed M.P., Chairman of Kerala-based Malabar Gold & Diamonds. “They have become extremely cautious while coming to our jewelry stores.”

New Delhi-based PC Jeweller Ltd. has gradually reopened more than 50 of its stores with restricted timing and days, but the footfalls at its showrooms remain almost negligible, Chief Financial Officer Sanjeev Bhatia said in an exchange filing last week.

“Though the company is confident that as soon as the lockdown restriction will be lifted completely, jewelry demand will start picking up, it does not foresee complete resumption before the onset of the festival season in the third quarter,” he said. Buying and gifting of gold during key festivals like Diwali is considered auspicious in India.

Measures to contain the pandemic may result in stores staying shut for longer periods, according to Care Ratings. That will lead to heavy revenue losses for jewelers, stress on profitability, increase in inventory days and the lengthening of operating cycles, which could further damp borrowing abilities in future and create liquidity pressure, it said.

“I think in my whole career of about 40 years there has been no match for this year,” Sen of the trade federation said. “The whole quarter will go away and it will be difficult to make up so it will be a very bad year.”