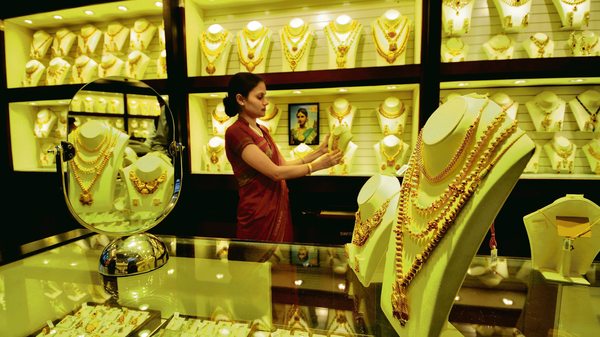 Gold prices today edged lower in India while silver rates continued to tumble. On MCX, October gold futures were trading 0.07% lower at ₹38,527, down over ₹1,300 from last week’s highs of ₹39,885. Silver futures on MCX fell 0.51% to ₹47,640 per kg, continuing their recent slump after hitting ₹51,489 last week. In global markets, gold traded 0.2% higher today at $1,509.81 an ounce while spot silver dipped 0.6% to $18.04 per ounce. A planned resumption of trade talks between the US and China has improved global risk sentiment and put downward pressure on gold prices.

Risk sentiment was also supported by comments from Federal Reserve Chair Jerome Powell that the US central bank would continue to act “as appropriate” to sustain the economic expansion.

On the technical side, gold has come under pressure after failing to break past the $1555/oz level, says Kotak Securities in a report. However, many analysts still hold on to their positive stance on gold, saying global growth worries and US-China trade concerns are far from over.

The sharp sell-off in silver prices has been attributed to a lack of fresh ETF participation after prices jumped sharply in recent months.

Back in India, Reuters reported that dealers offered larger discounts as jewellers held off on fresh purchases. Demand continued to be lukewarm as high prices deterred customers. According to the report, dealers offered up to $45 an ounce discount over official domestic prices last week, higher than $24 offered the prior week. The domestic price includes a 12.5% import tax and 3% GST. So far this year, gold prices are up around 20% so far this year.

Demand in India, the world’s second-biggest gold consumer after China, usually strengthens in the October-December quarter due to the wedding season as well as festivals such as Diwali and Dussehra.

The 2019-20 Series IV tranche of gold bonds opened for subscription today and the government has fixed price at ₹3,890 per gram. In addition, those applying online get a discount of ₹50 per gram. Under the gold bond scheme, which was launched in 2015 to reduce demand for physical gold, the bonds are denominated in units of one gram of gold and multiples thereof. (With Agency Inputs)