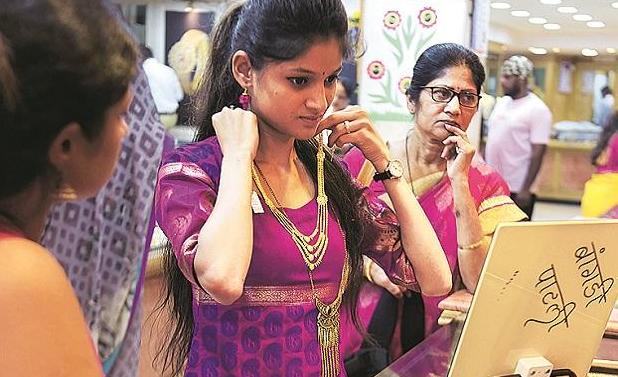 India’s gold demand in the April-June 2019 quarter saw an increase of 14 per cent on a year-on-year basis, but it might remain muted in the next two quarters. Among the reasons for a weak outlook are high domestic prices. The rates, already high in international markets, will increase further in India on account of the 2.5 per cent import duty increase announced in Union Budget 2019 earlier this month.

According to GFMS Gold Survey: H1 2019 Review and Outlook, published by the Refinitive today, Jewellery demand increased by 16 per cent in the June quarter to 168 tonnes, while investment demand increased by 10 per cent to 44 tonnes. “A higher number of marriage days, together with heavy purchases during ‘Akshaya Tritiya’ resulted in the rise,” said the report.

In the June quarter, the survey said, consumers bought in advance, both for marriage and investment purposes, anticipating the price would trend higher. This eventually did happen, so the demand flagged in June as a result. Nevertheless, the first half of this year remained the best six months since the first half of 2015. Total demand for the period stood at 371 tonnes. Of this, jewellery consumption attracted 289 tonnes, while investment demand was 82 tonnes.

Unofficial gold import fell sharply in the first quarter of the 2019 calendar year (January-March) to just 15 tonnes, the lowest in several quarters. The numbers for the June quarter were also low at 20 tonnes, thanks to strict surveillance during the election months.

Lower unofficial import also explains an increase in official imports. Unofficial import, meanwhile, is expected to go up from now. The GFMS survey stated that jewellery export had seen an improvement, requiring more gold to be imported for exports. However, “we estimate that round-tripping continued and these flows would have increased”, said the survey.

When the same gold is exported and then imported back with some change in form, it is known as round-tripping.

Scrap supply increased notably towards the end of the second quarter, a key observation for the rest of the year. At present, the price is 8 per cent higher than that at the end of May.

On outlook for demand in India, the report said, going by the monsoon progress and the persistent high price of gold, “we remain cautious in our estimate for the last two quarters of this year. According to our analysis, the average July-December jewellery and investment demand in the past five years remained at 330 tonnes and 89 tonnes, respectively. We believe both segments this year might fall short of the five-year average — at least by eight per cent for jewellery and 12 per cent for retail investment”.

GFMS was bullish about the gold price. It said that it expected gold to average $1,350/ounce in 2019, with the possibility to test and move beyond $1,500/oz later in the year, particularly if there is further escalation of global economic concerns and major central banks revert to monetary policy easing. However, if the US Federal Reserve fails to deliver a rate cut in its July meeting and leaves its policy unchanged for a longer period, there could be a swift change to a stronger dollar and a sharp drop in the gold price, particularly given the current speculative positioning.

Beyond ornaments and investment, gold can be a shiny affair in industry too