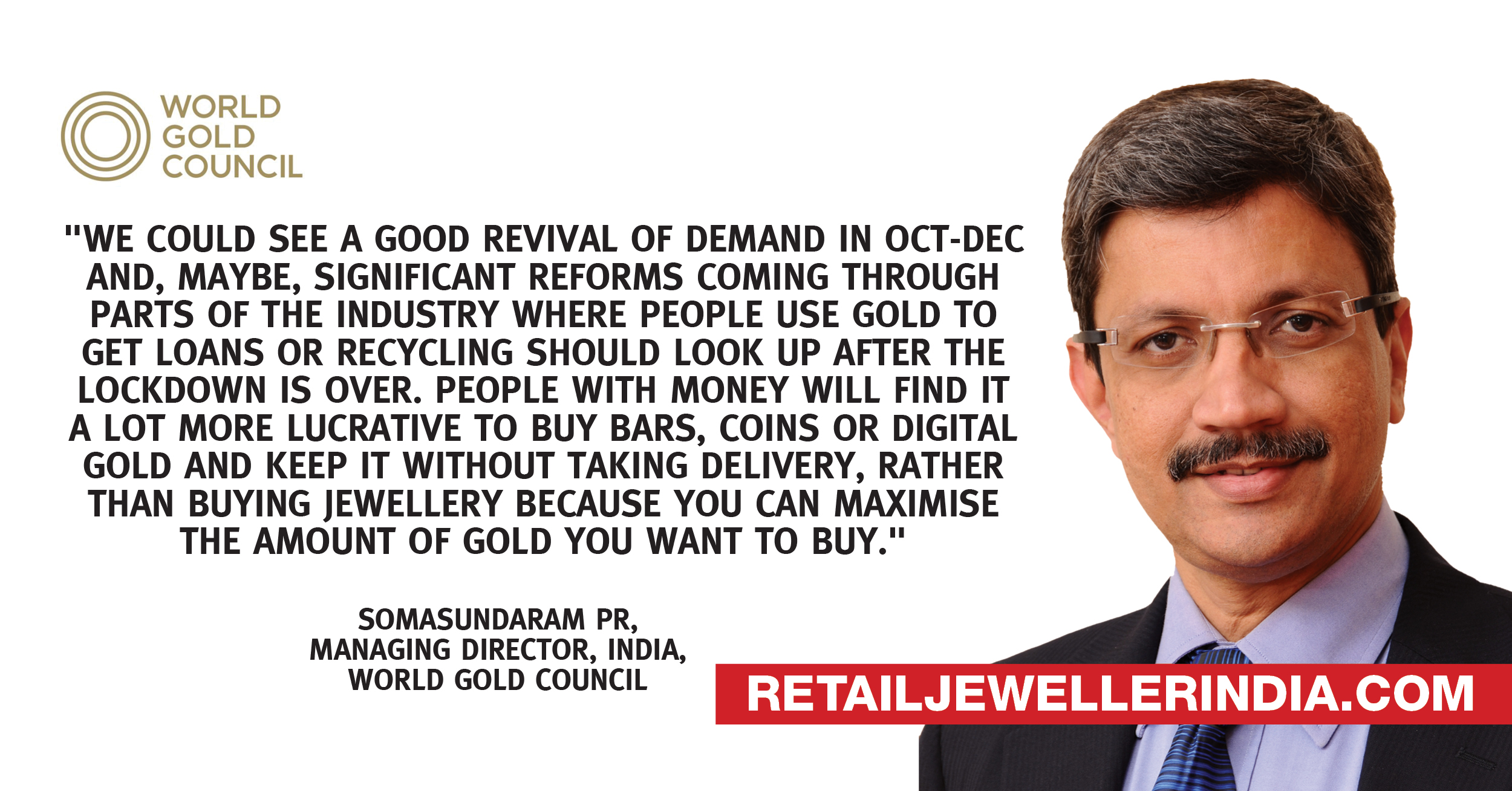 The gold market in India might see a significant shift in consumer behaviour once the nationwide lockdown is lifted. While Indian buyers have traditionally preferred jewellery over other forms of gold, record high prices and social distancing norms may now tip the scales in favour of bars, coins and even digital gold, according to World Gold Council’s India Managing Director Somasundaram P.R.

“If you want to maximise the amount of gold you want to buy, but you aren’t keen to have jewellery straightaway, bars will play a very good role,” he told Cogencis in an interview.

The industry, he said, would have to organise itself better to resume trade and ensure the safety of customers, and organised players would be better positioned to adapt to the new norms.

According to the World Gold Council, consumption of the metal in India in Jan-Mar was at an 11-year low of 101.9 tn.

Q. India’s demand for gold in Jan-Mar fell sharply because of high prices, the lockdown, and economic uncertainties. How do you see demand in the months ahead?

A. We could see a good revival of demand in Oct-Dec and, maybe, significant reforms coming through…parts of the industry where people use gold to get loans or recycling should look up after the lockdown is over.

Weddings have been postponed, and those that will take place will not be as ostentatious. Consumers may be a little reluctant to have opulent pieces of jewellery. People with money will find it a lot more lucrative to buy bars, coins or digital gold and keep it without taking delivery, rather than buying jewellery because you can maximise the amount of gold you want to buy. As the conversion charge is low, you can always convert it into jewellery later. We saw this trend during Akshaya Tritiya, when some people preferred certificates to jewellery.

This change in buying pattern will also result from people wanting to avoid going to shops and gatherings. It may take a while for them to just go out and shop. And, they may find it better to buy other forms of gold rather than jewellery.

Q. Will this lead to a sharp rise in digital purchases and e-gold?

A. Digital should grow, but it is more of an urban phenomenon. Also, in the current environment, there are issues coming up in digital transactions and payments, though not specifically to gold. How those issues are dealt with is also important.

Q. Imports are down to a trickle, shops have been closed for weeks, and artisans have left for their homes. How early will the industry be able to resume trade?

A. We don’t know how long it will take for imports to resume. It certainly doesn’t look well for small retailers. Established players might find it easier to re-organise themselves once the lockdown is over because the way we buy jewellery is also going to change in a very significant way. How adaptable small players are remains to be seen.

Artisans have largely been unorganised and many of them have dispersed because of the lockdown. How fast the industry can put the supply chain back on track is also important because the industry does not have adequate data on them.

Q. What other changes will the industry have to adapt to in terms of consumer behaviour and safety precautions?

A. Recycling and loans against gold will increase. That’s the right thing because that’s the whole purpose of gold as an asset. The recycling market has traditionally been very unorganised. Getting organised will help people get access to loans, credit and cash in a more transparent way. That also requires some policy changes. The government should allow banks to buy back gold, which means anybody who wants to sell gold can give it to a bank. This will also be beneficial for the gold monetisation scheme. The government could give incentives to people who want to recycle gold through banks.

Buying behaviour will change. Shops will not be crowded…there will be social distancing. If someone wears gold, how will shops sanitise it? Will everyone follow the same practices? Jewellery stores are generally in clusters, so even if one person is found infected, the entire area will be shut down. How will the industry institutionalise these practices? That is why organised players will be much better placed than unorganised players. We insist that the industry snot fhould operate with a particular code of conduct so that there is consistency and trust. Hopefully, everybody will now find an economic reason to have a code of conduct.

Q. Prices in the Indian market are near record highs. What role will this play in consumer demand?

A. High prices will lead to customers demanding integrity from their jewellers. One year ago, you were paying almost 31,000 rupees for 10 gm; now, you’re paying almost 50,000 rupees. People’s incomes haven’t gone up as much. They will expect more value from the jeweller and the industry will have to respond to that.

A. We are not giving any outlook for India’s gold demand in 2020 because we don’t even know when will mines restart, what recycling will be like…It’s not just about India, it is about global demand. The right thing now is to say we cannot estimate those factors.

Q. Will we see a surge in smuggling because of the high prices?

A. Smuggling has and will come down dramatically because there is no demand. Despite high prices, the incentive is less, as domestic prices are at a discount to the landed price because of weak demand. And, if recycling rises, supply will not be an issue.?

Q. So far, central banks have been one of the primary drivers of demand for gold, but their purchases fell 8% to 145.0 tn in Jan-Mar. Will we see a significant slowdown in their buying as they focus on an economic revival?

A. Central banks have seen the benefit of gold, and they have been buying 600 tn annually for the last three years. Even in the first quarter, it has been substantial at 145 tn. In the revised scenario, it is difficult to forecast because now, their priority is to support the economy. How gold comes to play a role and how much of additional debt they are willing to take will have to be seen. We need to see how central banks’ situation in terms of reserves changes. If the reserves are put to use, we have to wait and see how much will they buy.