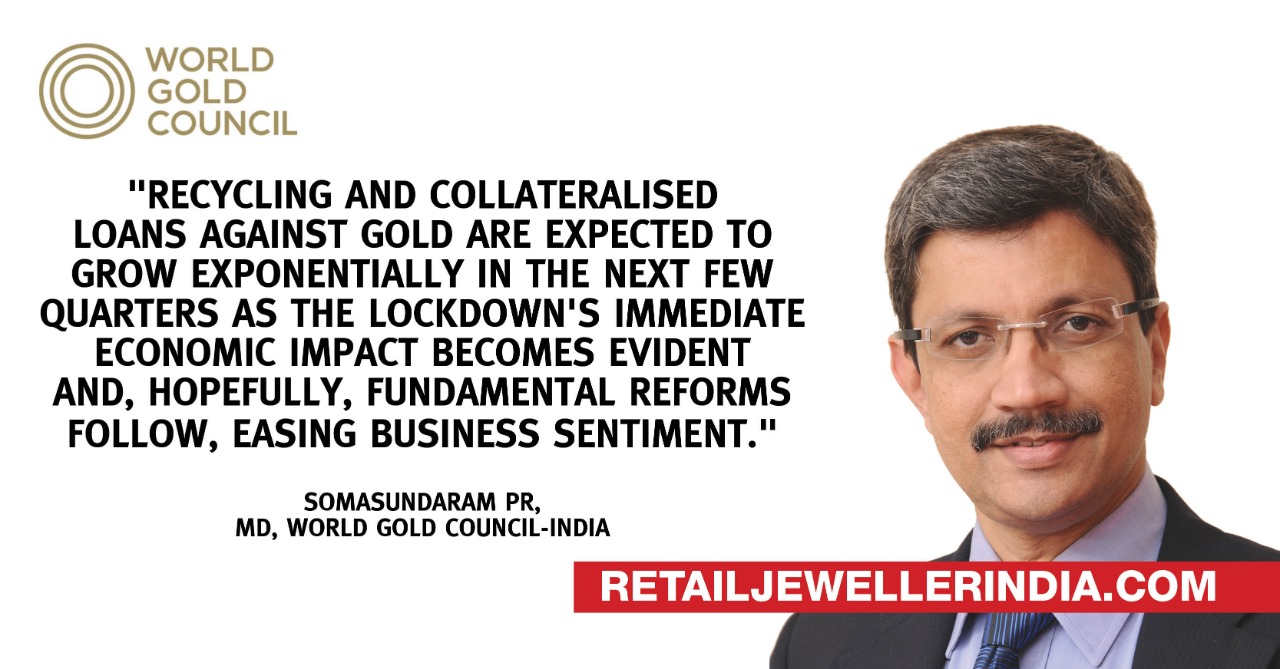 Not unlike many other sectors, the gold industry has been lulled into a silence since the country went into a lockdown two months ago in a bid to stem the spread of the deadly coronavirus. Jewellery shops and refining units are shut, and imports have come to a halt. The industry is staring at almost zero sales.

But once the lockdown is lifted, there may be a different beast to deal with.

Faced with loss of jobs and an economic downturn, people are likely to rush to sell their old gold, leading to a surge in scrap supply. The industry is looking at banks and exchanges to absorb the excess gold, and there may be a need to export more quantities of the precious metal, which is allowed only with value addition and not in bars or coins.

“The supply of scrap in the first three months (after the lockdown ends) will be too much for the markets to absorb. We might have to export gold,” said industry expert Bhargava Vaidya of B.N. Vaidya Associates.

The few jewellery stores that have reopened in the ‘green’ and ‘orange’ zones have witnessed a rise in customers redeeming their gold schemes for cash. “Many customers had come to redeem their monthly schemes, which have matured,” said an official with Kolkata-headquartered Senco Gold & Diamonds.

Indians are known to have sentimental attachment to gold, but the precious metal is obviously treasured more as it is a hedge against financial uncertainty. With the economy hit by the lockdown since Mar 25, gold’s status as a haven asset will come into play.

Most economists and analysts have predicted a deep contraction in India’s economic growth in this financial year, with the June quarter seeing the deepest cut.

In better times, the weather bureau’s forecast of a normal monsoon would have brought cheer to jewellers, as two-thirds of India’s gold demand comes from the rural areas. But with the pandemic and the consequent lockdown pummelling the economy, and many migrant workers returning home, jewellers have little hope of any revival in demand.

Jewellers are also worried whether they would have enough liquidity to deal with the rise in supply of old gold. “Where will we get the money to give all the sellers if there are no buyers,” said a Kolkata-based jeweller. “We can’t even turn customers away because it will affect our relationship with them.”

Gold prices in India have hit record highs taking cues from the global markets that are also in the midst of deep crisis. Prices are currently at an unprecedented high of about 47,000 rupees per 10 gm in the spot markets. Elevated prices are also an incentive for people to sell their gold.

It is not just about retail consumers, even non-bank finance companies and pawn brokers are likely make a beeline to sell gold. Saddled with bad loans, they are also expected to liquidate gold stocks, which might lead to over-supply.

“Normally, the supply for recycling is around 500 kg per day, which rises to around 1 tn per day during the peak season. But because of the conditions now, we could see it at 1.5-2.0 tn per day,” said James Jose, secretary of the Association of Gold Refineries and Mints.

Market participants see a surge in exports of gold jewellery since gold bars refined locally cannot be exported. Many Indian jewellers produce jewellery with very little value-addition and export them to West Asia, where they are melted into bars and re-exported.

“This kind of round-tripping of machine-made, cheap jewellery might become viable since demand in India is unlikely to pick up soon,” said a jeweller based in Mumbai said.

This round-tripping and export of factory produced basic jewellery is set to see a rise also due to a shortage of artisans, most of them migrants from states such as West Bengal. Financial uncertainty and fear of the virus forced many of these artisans to return to their native states.

“Artisans have largely been unorganised and many of them have dispersed because of the lockdown,” Somasundaram said. “How fast the industry can put the supply chain back on track is also important because the industry does not have adequate data on them.”

More than 300,000 gold artisans from jewellery manufacturing hubs have returned to their homes in West Bengal as the lockdown had led to wage loss, said a Mumbai-based jeweller.

Experts suggest the government should ease gold procurement norms for banks, and urge exchanges to buy gold locally. Currently, designated banks are only allowed to import gold, and cannot source gold that is refined in India.

“This is a good time to allow banks to buy gold locally and allow the export of gold bars,” Somasundaram said.

Exchanges in India take delivery only of gold bars accredited by high purity and quality standards of the LBMA. Currently, MMTC-PAMP is the only bullion refinery in India that has accreditation from the LBMA.

The National Stock Exchange and BSE have said they were working to implement the Bureau of Indian Standards’ good delivery norms that would allow domestically-refined gold bars to be delivered on the exchanges.

Heavy rush in jewelleries to buy gold amid lockdown