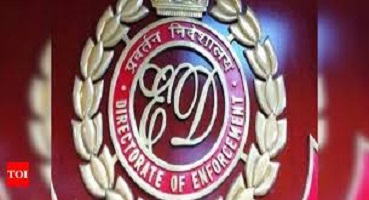 HYDERABAD: The Enforcement Directorate (ED) has arrested Preet Kumar Agarwal, son of city jeweller and Ghanshyamdas Gems & Jewels owner Sanjay Kumar Agarwal, in connection with Rs 100 crore gold smuggling case. It is suspected that the accused had diverted 250 kg of gold, which is an offence under the Customs Act.

The ED Kolkata unit with the assistance of Hyderabad ED sleuths conducted searches at five locations in Hyderabad on Wednesday. The ED found evidence relating to large-scale hawala transactions during the searches. The searches were carried out at Ghanshyamdas Gems & Jewels at Abids, Shree Ganesh Jewels owned by Sanjay’s employee Avinash Soni, PH Jewels owned by his relatives and Sanjay’s residential premises.

The ED initiated the probe under the Prevention of Money Laundering Act (PMLA) based on an investigation done by the Directorate of Revenue Intelligence (DRI) Kolkata unit on diversion of gold jewellery meant for export to the domestic market.

Sanjay procured duty-free gold from MMTC, State Trading Corporation of India, Diamond India Ltd and sold the gold illegally in the domestic market and also evaded the customs duty. Sanjay was earlier arrested in February 2012 by the CBI following a complaint of fraud filed by the State Bank of India. Sanjay had allegedly availed credit facilities running into hundreds of crores of rupees from the bank by providing fake collateral securities.
It was on April 4, 2018, DRI sleuths apprehended Preet Kumar at Kolkata International Airport. The ED said, “Sanjay had already boarded an Indigo Airlines flight to Hyderabad but was made to de-board by the DRI. On the same day, investigators intercepted two boxes from Indigo Airlines domestic cargo which contained 1,194 pieces of gold bangles valued at Rs 16 crore.”

The ED said the modus operandi of the accused is that jewellery meant for export after completion of all formalities by the customs authorities is exchanged within the airport and brought back.

“The consignment was supposed to be carried by Preet Kumar to Dubai. However, instead of bringing it to Dubai, Preet Kumar passed on the boxes containing the gold jewellery to his father Sanjay, who was waiting outside the airport. Sanjay, in turn, booked the consignment with Indigo Airlines domestic cargo so as to transfer it from Kolkata to Hyderabad,” ED officials said.

Investigating agencies said Preet Kumar helped his father in diverting two sealed boxes containing gold bangles meant for export from Kolkata airport to his father. “Ajay Agarwal, brother of Sanjay, confessed that Sanjay had invested in his firm, Kalpataru Jewellers. He had also confessed that he had exported 19 consignments through Kalpataru Jewellers,” the officials said.

The Delhi high court had earlier quashed preventive detention orders against the accused passed by COFEPOSA unit of the Central Economic Intelligence Bureau.