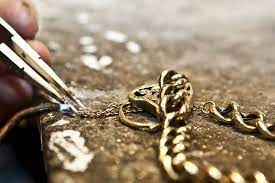 The Gems and Jewellery Export Promotion Council (GJEPC) has suggested for introduction of a repair policy; cut in import duty on gold and silver; and the abolition of equalisation levy of 2 per cent for purchase of rough diamonds with a view to promoting the growth of the sector. These issues among others were raised during an interactive session with members of GJEPC and Commerce Secretary B V R Subrahmanyam in Mumbai on September 4.

Colin Shah, Chairman, GJEPC expressed confidence that with the support of the government, the sector will achieve its target of USD 70 billion in the coming years.

“I am confident that most of the sectoral issues raised today will be resolved when we meet the Commerce Secretary again after six months,” he said in a statement.

During the interaction, a range of points were covered including GST, issues related to the RBI and customs.

“With regards to the jewellery, the concerns raised by the exporters included the introduction of repair policy in foreign trade policy; duty drawback rates to be at par with prevailing import duty; a hand- carriage of gems and jewellery to be allowed in other ports like Mumbai, Kolkata; reduction in import duty on gold and silver from 7.5 per cent to 4 per cent,” the council said.

Further, it said that the council flagged issues pertaining to special economic zones (SEZs) and that included exemption from stamp duty on transfer of space within SEZ; supply of precious metals from foreign buyer to sez units; and allowing movement of precious metal and other goods of nominated agency from one SEZ to other, under transit bond or customs preventive escorts.

With regards to the diamond sector, the council suggested for turnover/presumptive tax regime for special notified zones; rationalisation of GST rate on certification and grading services; abolition of equalisation levy of 2 per cent for purchase of rough diamonds; and reduction in import duty of cut and polished diamonds.