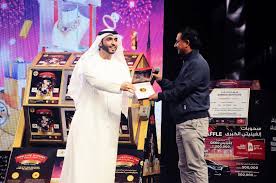 While for most of us 2020 has been an unforgettable year in a negative sense due to the pandemic and all the hardships it brought, Nepalese national Pradeep would like to believe in the saying that ‘all’s well that ends well’.

The 47-year-old jobless expat hit a jackpot and won over Dh50,000 worth gold at DSF’s jewellery campaign where he had filled in a raffle after buying a gold chain for his wife and daughter.

Pradeep Sresta, who worked as a technician with a Dubai company and earned Dh5,000, had recently resigned from his job and was packing his bags to go home when he decided to buy his wife and daughter some gifts, making use of ongoing DSF sales.

Pradeep, who participated for the first time in a DSF raffle draw, said he regrets not doing so previously but feels it was his family that proved lucky for him. He won 250gm of gold at Dubai Gold & Jewellery Group’s (DGJG) ‘non-stop winning jewellery campaign’ held in association with Dubai Festivals and Retail Establishment (DFRE) for the 26th edition of the Dubai Shopping Festival (DSF).

During the campaign, customers who purchase gold jewellery worth Dh500 are entered in the lucky draw that will choose four winners every second day until January 30.

“I went to a Malabar Gold shop and bought a bracelet and a chain for my wife and 10-year-old daughter and they proved lucky for me. I am so happy and I wish I had participated in it previously too,” he said.

Pradeep said he had resigned from his job a month back as he wanted to to take a break from work and be with his family (comprising his parents, wife and daughter) during these tough times when Covid-19 pandemic is raging across the world.

“I have been working hard in the UAE for 20 years now and I felt it was time I went back home and spent some time with my family too, more so because they are scared of coronavirus. This has been the best news for me this year and I think it is also the perfect parting gift or perfect New Year’s gift that the UAE gave me and my family.”

Pradeep, who intends to come back to the UAE after taking a few months break, said he has never won any rafffle nor a small prize in these 20 years in the UAE and that’s because he never participated in any raffles as he thought he would never win.

“When I got a call from Dubai Gold’s team telling me about my win, I was sure it was a hoax. But when they gave me my details and asked me to come to receive my prize, I felt it could be true. It only sunk in the next day, when I went to collect my prize and realised it was all true,” an excited Pradeep said.

Each raffle ticket gives customers a chance to win:

• In total 25 kilos of gold, with four winners (250 gm gold each) announced every second day from until January 30.

Apart from the participating outlets, jewellery shoppers will also be able to participate in the raffle promotion with their jewellery purchases from the shops in concourse B at Terminal 1, concourse C at Terminal 3 and Terminal 2 of the Dubai airports.

Speaking on the occasion, Tawhid Abdullah, Chairman, Dubai Gold & Jewellery Group, said: “We are now starting to see tourists at the Deira Gold Souq and that has always been a major positive for the business. We have witnessed an increase in demand for gold jewellery in the last couple of months and expect it to grow further after the launch of the big DSF raffle promotion, as shoppers want to increase their chances of winning by shopping during DSF.”