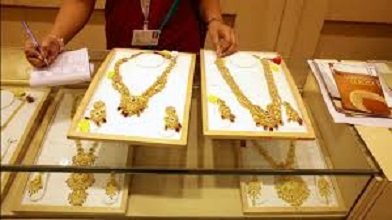 New Delhi: India’s gold imports in 2020 slumped to the lowest in more than a decade as the coronavirus pandemic battered demand and logistics, while higher prices kept buyers in the second-largest consuming nation on the sidelines.

Overseas purchases fell to 275.5 tons last year, according to a person familiar with the data, who asked not to be identified as the information isn’t public. That’s the lowest in records going back to 2009, according to World Gold Council data.

Imports in December rose 18% from a year earlier to 55.4 tons, the person said. Finance Ministry spokesman Rajesh Malhotra didn’t immediately respond to a call to his mobile phone.

Consumption in India stumbled for a second year as record high local prices curbed demand and lockdowns to control the virus battered the economy and restricted movement. Fewer flights due to virus-related curbs also kept a lid on imports as India meets most of its gold needs from overseas markets.

“In the last few months we have seen that though retail sales picked up, the recycling of scrap sale has increased with people using old gold to buy,” Ashish Pethe, chairman of All India Gem & Jewellery Domestic Council, said by phone.

While demand from retail consumers has eased, the metal is still a haven for investors. Local gold futures, which reached a record high in August, surged nearly 30% in 2020, the biggest jump in nine years.

While demand will pick up as the economy recovers, it is unlikely that the industry will go back to normal as people will gain confidence only after a successful vaccination drive, Pethe said.

“By June-July, people will get the vaccine and have more confidence so we will see good activity only in the last three to four months during the festive season,” Pethe said. –Bloomberg