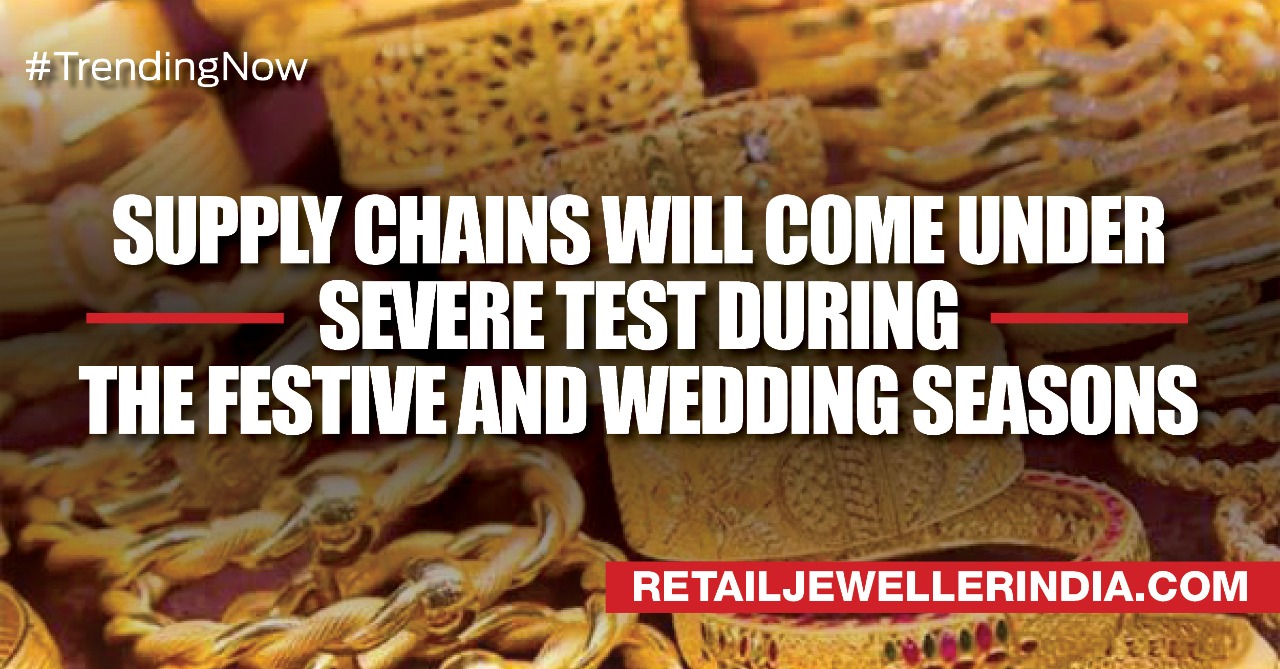 The pandemic Covid-19 has devoured many businesses across the globe hence, slashing the world economic growth to almost half. The jewellery sector is also adversely affected by the pandemicwhich has forced the sector to revamp its entire business model. Like many businesses, jewellery sector is also having very high expectations from the upcoming wedding and festive season. But currently, most of the jewellers are selling articles through their inventory and not opting to place more orders to manufacturers. This puts a great question mark on the future planning of the jewellers as once their inventory is exhausted then what will be there second line of supply chain to fulfill the demand of the upcoming season.

The recent trend shows the demand of gold jewellery has picked up and reached to a substantial stage even as the Covid-19 turmoil is still going on. Speaking on the recent hike in footfalls, BinaishaZaveri, Director, TribhovandasBhimjiZaveri, stated “Yes!there are some purchases but demand is still way off from previous years so this will allow for lead time when production resumes. This situation is unprecedented, but the industry has faced somewhat similar situations before too, for example in 2016 and as visible, the ongoing situation is slowly improving so we expect that by October, there would be enough stability in the system.”

With most of the craftsmen working in jewellery sector returning to their native places, the manufacturing in jewellery sector has slumped drastically, especially the handmade jewellery which was earlier considered as a hot selling cake but now has almost become an extinct article to find. Most of the retailers feel that though sector is crawling back to normalcy yet, jewellery manufacturing is almost down to zero which means that presently, jewellers are mostly selling the stock they have in their inventory.

Explaining the ongoing situation of the market, Priyesh Nagar, Managing Partner, Jewellers Madanlal Chaganlal, Indore informed, “Handmade gold Jewllery is in maximum stress and innovation won’t come for sure, so replenishment of designer goods is facing trouble,but on the other hand, machine manufactured goods would be easy and the factories involved in manufacturing of such jewellery articles are more organised and can ramp up their production as per orders.”

“Earlier, wholesalers used to visit various jewellery shows with plenty of stock and we had an option of selecting new goods as per the recent trend but now the rules have changed, wholesaler are not producing stock in high numbers because people are not sure about the future situation even for the upcoming wedding and festive season,” Nagar added further.

Retailers are keeping their reconnaissance mode on

There are various issues that are holding the manufacturers from ramping up the production line. First, though the wedding and festive season is around the corner, still manufacturers are very skeptical about the future demand. Secondly, the cost of production has gone up substantially and manufacturers don’t want flush in all the funds because there was a break in the market for three to four months so currently there are no positive phases in the market.

“As a retailer, we are planning to churn our stock more and concurrently chalking ideas for September, October and November sales. On this note, we will be pre-ordering lot of articles for the upcoming season. Earlier, it was more of an active and on the go sale and now it has become more of a planned sale,” said Nagar.

Usually in festive and wedding season, demand for bridal and heavy jewellery is high and most of these articles are handmade but now, with the shortage of workers, the manufacturers might find themselves in a grim position.

Vikram Verlekar, MD, Ulhas Jewellers, Goa said, “Yes, there are chances that we might fall short of supply for certain items but we also need to look on the brighter side. Following the current trend, there are more chances of shifting on focus to what the bride would like to carry in her trousseau rather than just focusing on the wedding day jewellery.”

The general pulse of the industry indicates that there won’t be any big wedding happening until the next financial year. This means there is a big gap of five to six months which is why jewellers are bit cautious about building the stock as they can’t under do it or overdo it.

Echoing the same sentiments, Binaisha Zaveri said, “Owing to the upcoming festive season, one needs to be in the right frame neither extra cautious nor too optimistic. Manufacturers should build the stock as demand is there, not that 100 per cent but, it is there. I can clearly see market and consumer behaviour is shifting so one needs to be well prepared for that.”

Apart from these, retailers feel that there won’t be a mass gathering of people in the upcoming wedding season and this will restrict buyers to limit their purchasing power. “If you put this on the larger view then it is a bad sign for our business. When any wedding happens then apart from bride, other family members would like to buy or invest in jewellery items which is now, out of the picture due to restrictions,” said Nagar.

The Global seat of diamond manufacturing – Surat, is humming again