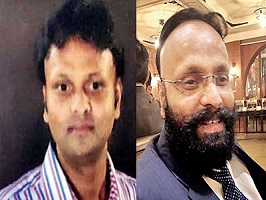 NEW DELHI: A  47-year-old jeweller and his 42-year-old brother allegedly died by suicide in their shop in north Delhi’s Chandni Chowk on Wednesday afternoon, according to police, who also revealed that a suicide note was found on the site in which the brothers talked about their straitened financial condition and asked that no one be blamed for their deaths.

The cops identified the deceased as Ankit Gupta and Arpit Gupta, who ran Krishna Jewellers at Maliwara in Chandni Chowk. Some relatives and neighbours have, however, alleged that the two men were being harassed about paying back a loan they had taken from a financer in the locality.

The twin deaths were discovered in the shop at around 3pm on Wednesday when the bodies were found hanging from a rod fixed across the ceiling. The men had used a dhoti to kill themselves. The suicide note, allegedly signed by the two, lay on the table. A fallen chair and stool nearby seemed to indicate they had been used in the suicide.

Some family friends are reported to have told the cops that recovery agents had been visiting the brothers frequently and pressing them to repay the loan. The third of the Gupta brothers, Namit, who also assisted in the family business, alleged that the financer had been threatening the brothers if they did not return the money they had borrowed from him. “He also sent his henchmen to the shop to threaten my brothers,” claimed Namit. “But how were they expected to repay the loans where there was no business after the lockdown?” An employee, Vishnu, also maintained that the financer’s men came to the jewellery shop every day to issue threats to the two brothers.

The cops have, for now, launched an inquest under Section 174 of CrPc.

Residents of Bazar Sitaram, the brothers had faced heavy business losses recently, police said after questioning relatives and neighbours. The cops apparently were informed about multiple loans availed by two that they had been unable to repay after business was hit by the Covid-19 lockdown.

Of the two, Ankit was married and had two children. Their father ran a realty business from the ground floor of the same building where they died. The bodies of Ankit and Arpit have been removed to a hospital and will be handed over to the family on Thursday after the autopsy formalities.