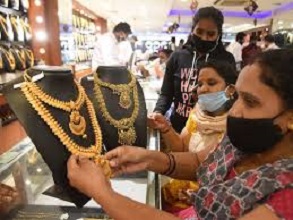 NEW DELHI: The average ticket size of gold and silver jewellery sale rose 16 per cent in November compared to the previous month despite gold prices hitting record levels, according to a report.

There was a 16 per cent increase in ticket size in terms of amount, but the overall ticket size of gold ornaments dropped 70 per cent as against festival season last year, as per the data gathered by startup OkCredit.

Since gold was at an all-time high, the ticket size for gold ornaments dropped, as people bought smaller and lighter jewellery items, the report said.

On the contrary, the average ticket size for silver items has gone up by 9 per cent (month-on-month), indicating that the demand shift from gold to silver, it added.

The festive season has brought in some respite to micro, small and medium enterprises, it said, adding this sector witnessed a faster recovery.

The growth in transactions on OkCredit app was led by Kirana and small businesses during the festival season, as per the data collated by the digital bookkeeping service provider.