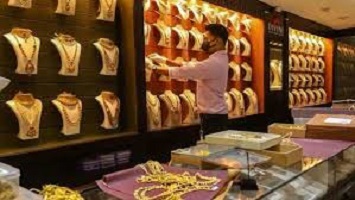 Western investors piling into gold in the pandemic are more than making up for a collapse in demand for physical metal from traditional retail buyers in China and India, helping push prices to an eight-year high.

Inflows into exchange-traded funds this year –- mostly in North America and Europe –- are already inches away from the annual record set in 2009, according to data compiled by Bloomberg. Meanwhile, demand in China and India, the world’s two biggest buyers of gold bars, coins and jewelry, plunged after the coronavirus stalled imports and emptied malls. Sales have been slow to return as rising prices deter buyers.

The shift underscores the global push-and-pull for gold between western investors looking for a safe haven and traditional demand centers for physical gold in Asia. It also raises crucial questions for the market this year, as gold prices risk losing support if ETF inflows slow down, or could gain even more momentum if Chinese and Indian demand bounces back.

“We expect the U.S. and European investors to remain interested in gold regardless of Asian demand,” said Darwei Kung, head of commodities and portfolio manager at DWS Investment Management Americas Inc. “If the buying pattern were to go up as well for China and India at the same time as what you see in the ETF market, then the price would have come up even further.”

Fear-driven investment demand in developed countries has contributed about 18% to this year’s gain in gold prices, while weaker buying by emerging-market consumers provided an 8% drag, Goldman Sachs Group Inc. estimated in a June note. An economic recovery and a weaker dollar may mean emerging-market demand in the second half of the year could “shift from being a drag on gold prices to a tailwind.”

Spot gold has risen 17% in 2020, closing out the second quarter with the largest rally in more than four years. On Tuesday, gold futures on the Comex topped $1,800 an ounce for the first time since 2011.

The higher prices have had a chilling effect on Asian shoppers even as economies reopen. Traditionally seen as a store of wealth, demand for jewelry in China and India tumbled as lockdowns, job losses and weak economic growth curbed discretionary spending.

Precious metals consultancy Metals Focus Ltd. forecasts a 23% decline for Chinese gold jewelry consumption in 2020, while Indian demand is expected to drop 36%. Chinese gold sales could be as much as 30% lower than 2019, said China Gold Association Chief Executive Officer Zhang Yongtao. Still, that is an improvement from a previous estimate of a 50% decline when the outbreak was at its peak he said.

Nidhi Saxena, 31, a software engineer at a technology firm based in Gurugram, India, was planning to buy gold bangles in March, but changed her mind as gold prices soared and colleagues were laid off.

“I can’t even think of buying gold right now when I am not even sure if my job is safe,” she said.

Trade flows have also been affected. In India, which imports almost all the gold it consumes, imports dropped by about 99% in April and May.

By contrast, demand from ETFs has surged as worries over the economic outlook, negative real rates and currency debasement after massive global stimulus measures drove haven-seeking investors into gold.

Total holdings of physical gold in ETFs have risen by more than 600 tons this year, according to data compiled by Bloomberg, and ETF inflows surpassed retail purchases in China and India in the first quarter for the first time since 2009. While consumer data isn’t available yet for the second quarter, ETF buying increased during the three months to June.

“The demand for gold in 2020 has been almost exclusively supported by investment demand,” said Steve Dunn, head of ETFs at Aberdeen Standard Investments. “Flows are charging ahead at an unprecedented pace.”

Still, ETF buying only represents one part of this year’s dramatic flows of bullion from East to West – a reversal from the typical direction in more normal times. More than 700 metric tons of gold have been added to vaults around New York this year, the most in records going back to 1993.

The massive imports into the U.S. were due in part to a scramble for gold among New York traders after the market was upended as virus lockdowns grounded planes and closed refineries. Comex inventories have since surged to a record.

It’s not the first time investment demand for gold has surged during a period of global uncertainty, boosting prices and deterring Asian shoppers. Yet it’s unclear what role lingering coronavirus concerns may play. During the global financial crisis, consumer buying in China and India rebounded from lows within a year but it took until 2013 — and a slump in prices — for combined demand in the region to hit the highest in a decade.

“Definitely we see that this year, the retail business will be quite challenging, especially for the jewelry sector,” said Roland Wang, managing director for China at the World Gold Council. A rebound in demand will depend on the economic and pandemic situation, he said.