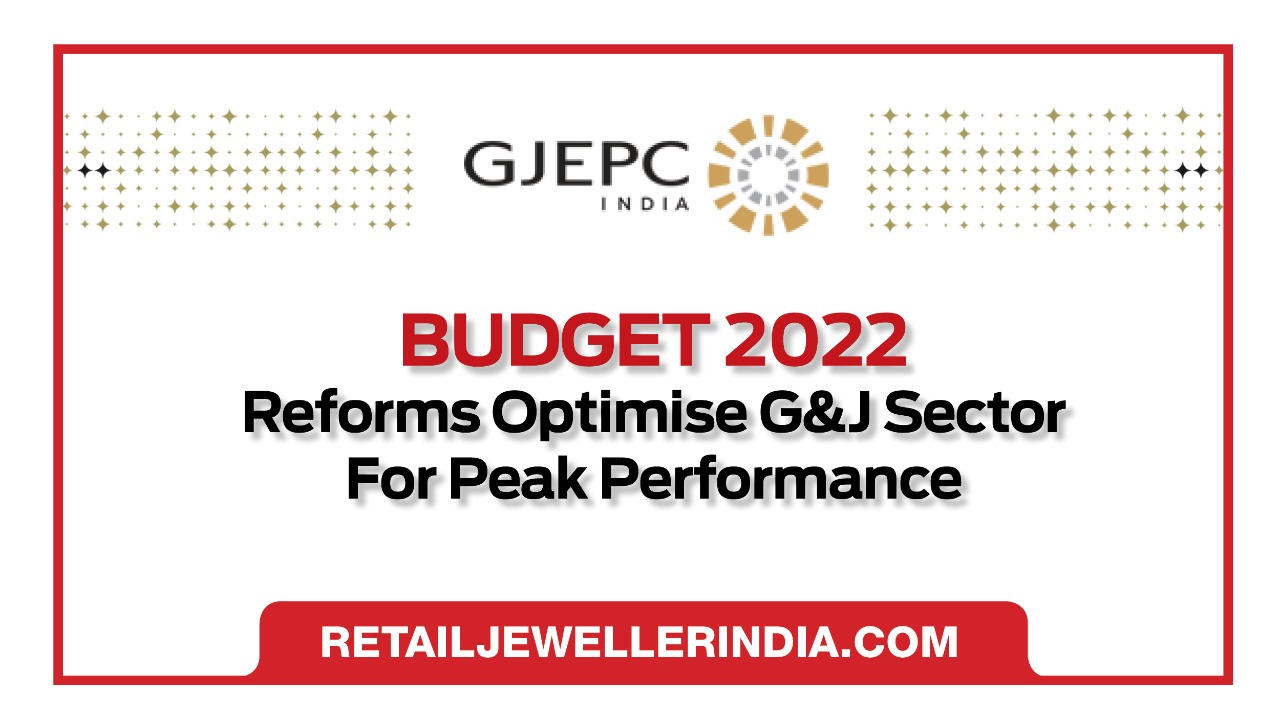 Mumbai: GJEPC congratulates the government of India and the honourable Finance Minister Nirmala Sitharaman for presenting a strong pro-reform and export growth-oriented Union Budget under the visionary leadership of our honourable Prime Minister Narendra Modi.

The gem and jewellery sector in India is overwhelmed by the Government support extended to the gem and jewellery industry in the Union Budget 2022-23. There is a swathe of favourable policy reforms announced that empowers the industry and puts it on a firm footing to capitalise on growth opportunities in the coming decade.

The Indian gem & jewellery sector is one of the leading contributors to the national economy and the country is the undisputed leader in diamond processing. GJEPC hopes to replicate this success in the jewellery vertical, too, and help India become the ‘Jeweller to the World’.

Colin Shah, Chairman, GJEPC said, “The Indian gem & jewellery sector is one of the leading contributors to the national economy and the country is the undisputed leader in diamond processing. Reduction in import duty on cut & polished diamonds to 5% will further help in strengthening the sector and retain its leadership position.”

“Since more than 90% of the gem & jewellery sector consists of MSMEs, the extension of the Emergency Credit Line Guarantee Scheme” (ECLGS) for MSMEs up to March 2023 will be a great relief to the sector, and we are happy that its outlay has been increased by Rs 50,000 Crore to a total cover of Rs 5 lakh crore, Colin Shah noted.

“Acceptance of personal surety bonds in place of bank guarantee for import of gold will meet our longstanding demand of simplifying duty-free gold availability, especially to the SME exporters of gold jewellery and revive the exports of plain gold jewellery. Surety Bonds in place of Bank Guarantee will be made acceptable to reduce indirect costs for suppliers. This will help gold jewellery exports,” said Colin Shah.

The Special Economic Zone (SEZ) Act will be replaced with new legislation that will enable the states to become partners in the development of enterprise and service hubs. This will cover all large existing and new industrial enclaves to optimally utilise the available infrastructure and enhance the competitiveness of exports.

An increase in Capital expenditure by 4.1% is good for the impetus of the economy. A composite basic Customs duty rate of 20% or Rs. 400/kg, whichever is higher is being applied on Imitation Jewellery.

Vipul Shah, Vice Chairman, GJEPC commented, “The Union Finance Minister Nirmala Sitharaman has announced some much-needed reforms that would springboard the sector to multi-fold growth in the coming year, thus eclipsing its relatively modest performance over the last decade. The emphasis on infrastructure spending is good news for the India Jewellery Park Mumbai (IJPM) which will be greatly benefitted due to the same. We also expect these reforms to raise the level of trust and transparency in the Indian gem and jewellery sector to a whole new level.”

Colin Shah further added, “The Government has been quick to realise the potential of e-commerce and has proposed to implement a simplified regulatory framework by June 2022 to facilitate gem & jewellery exports through the e-commerce route, ensuring that jewellers from every district in the country are able to ship their products overseas in a fast and economical manner. This is the need of the hour as the e-commerce sales of jewellery are growing exponentially in the US and the consuming markets. The broad basing of the exports through this measure have the potential to grow the exports from this sector to USD 100 billion dollars in the next 5 years.”

“The announcement of the honourable Finance Minister in bringing a new SEZ regime by changing the SEZ Act is another big relief for our sector as the exports from SEZ are growing at a rapid pace and have the potential of getting FDI in manufacturing and exports of jewellery from SEZ and take the country’s exports to one trillion dollars within the next three years,” he added.

GJEPC worked towards strengthening the gold jewellery industry through 2021. The Council supported mandatory hallmarking and mediated with the govt. on behalf of the industry for progressive solutions. It supported the World Gold Council’s “You Are Gold” campaign to make gold jewellery attractive to the millennial and Gen Z. GJEPC also spearheaded discussions on operationalising the India International Bullion Exchange (IIBX) along with stakeholders from across the gold ecosystem.

It would take 18 years to deplete underground reserves unless new discoveries are made: WGC