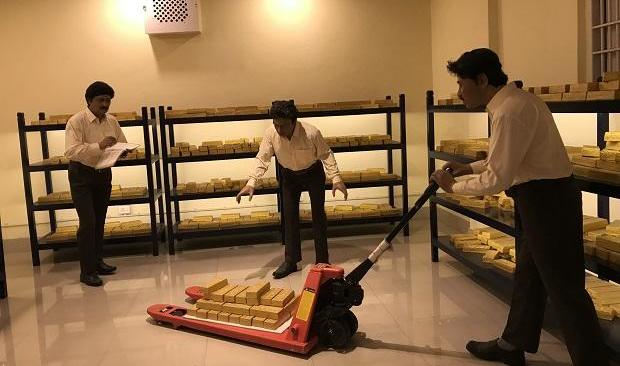 The Union Budget’s proposal for an international bullion exchange at the financial hub in Gujarat’s GIFT City has made businesses hope that the rules will be relaxed to allow gold import once that bourse starts trading.

Finance minister Nirmala Sitaraman said on Saturday the exchange at the international financial services centre (IFSC) will be an additional option for trade for global market participants, and it’s expected to be ready in the financial year 20-21. The exchange, once it gets regulatory approval, will be used to import gold and it will move the industry to develop related support systems like testing labs, vault companies and warehousing.

Two international companies have got licences to set up vaults in India. Businesses next want labs and refineries in GIFT City to test and process imported dore (unrefined gold) that can be then sold at the upcoming exchange, which will also promote exports of gold bars.

India discourages export of gold bars by asking for a higher value addition than global standards, but industry observers hope the new exchange will change that.

The India Gold Policy Center (IGPC) at Indian Institute of Management, Ahmedabad, last August submitted a report recommending a gold spot exchange in the country. An exchange, encompassing the entire ecosystem of trading and physical delivery and located in or close to an SEZ, could reform and transform the gold market in India, IGPC said.

An exchange at IFSCs has two big advantages: a regulatory regime that provides global credibility, and sufficient exemptions from capital controls to make the global contract feasible. IFSC is in the process of setting up a unified regulator to ease approvals for all businesses at the hub.

A source in one of the large bullion refinery in India said that once the regulations are out, they may consider setting up of the bullion refinery (for refining dore and converting it into gold bars) in the Gift City. According to him, refinery in Gift city is a good opportunity for exporting gold bars which is not happening as of now from India.

However, till India gold delivery standards announced last month by BIS are acceptable globally, only LBMA standard gold export will be possible for which if the Gift city refinery will either have to tie up with LBMA approved refinery or have to get the LBMA approval.

On the exchange whenever trading begins, the settlement will be T+1 and the gold would be quoted in US dollars and would not include import duties. This contract would be supported by a range of logistic facilities including like Vaulting facilities, refinery, warehousing (for which Free Trade warehousing Zone has been established in Gift city), financing (for which many banks are present there), refining and purity testing lab.

Once regulations for this are out, according to a senior industry official, “we would know whether Indian jewellers can buy gold on that exchange and bring to domestic area by paying importing duty for use in local market. Whether refineries or jewellery companies can get direct membership of the exchange or they will have to deal through brokers is another issue for which regulations will clarify.

The NITI Aayog report on ‘Transforming India’s Gold Market’ submitted in February 2018 has also suggested setting up of the spot gold exchange in IFSC. It had also recommended that from this exchange to allow import of gold in India through GIFT City and to create a bullion ecosystem within the IFSC.

Pramod Kumar Agrawal said that, “the proposal to establish bullion exchange at the GIFT City, will attract international bullion trading to India. It will also help in establishment of full-fledged Bullion exchange in India in future.”

What a collection for brides to be!