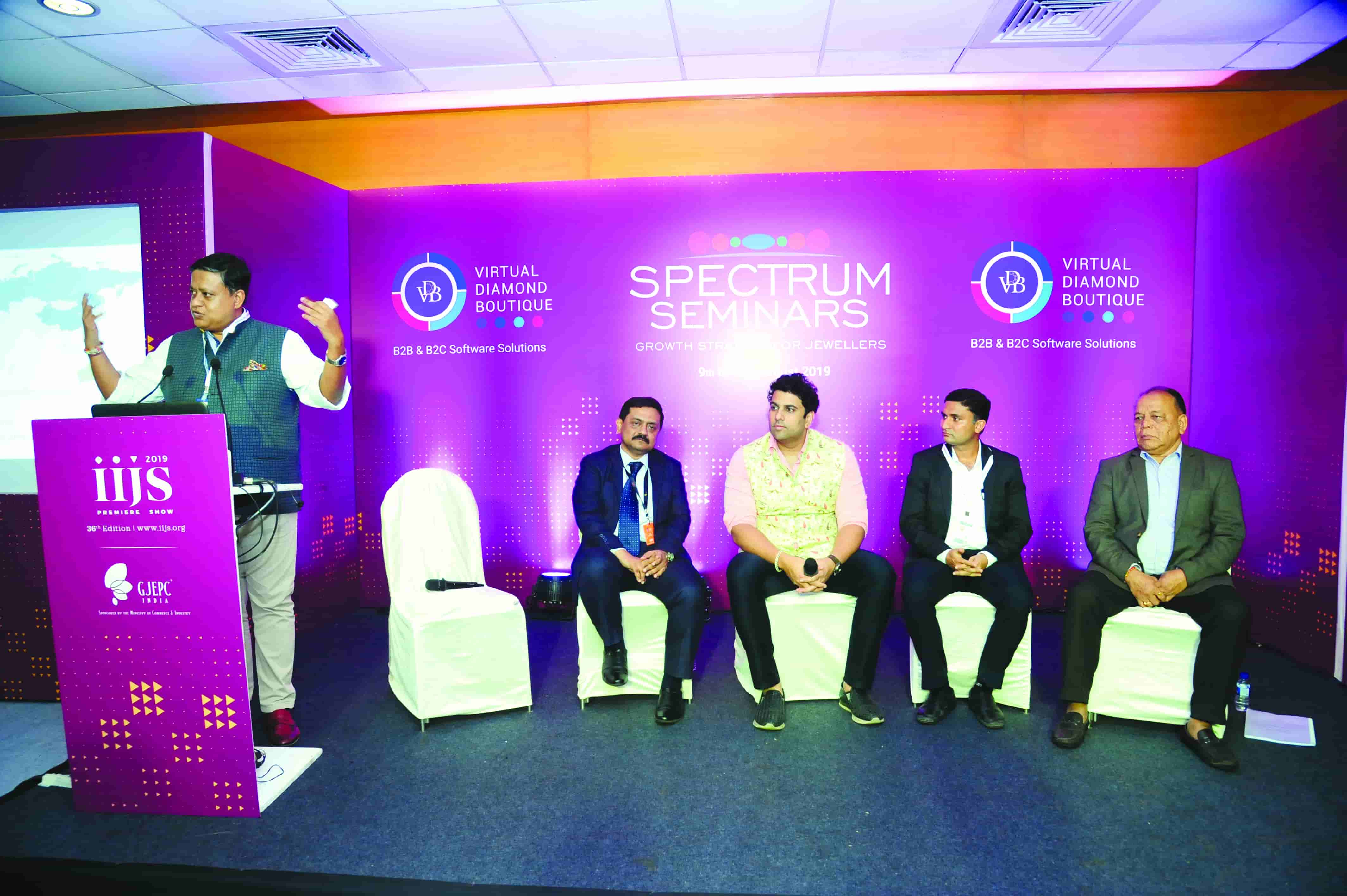 The recently concluded India International Jewellery Show (IIJS), Mumbai, was also the 36th edition of this -premier trade show. To make it more special and memorable The Retail Jeweller in association with GJEPC had organised a session at the show, on the topic ‘Turning Indian Retail Jewellers into global brands and exporters by 2025’.

GJEPC -organised a keynote seminar for IIJS 2019. The seminar saw the presence of eminent speakers from the industry. Renowned personalities like Sabyasachi Ray, Executive Director, GJEPC, Saurabh Gadgil, Chairman and MD, PN Gadgil Jewellers Pvt Ltd, Sambhaji Chavan, Joint Directorate General of Foreign Trade (DGFT), Mumbai and Nirakar Chand, CEO, Diamond India Limited came under one roof to discuss the road ahead for Indian retailers and how they can make a mark at the global market within the next six years. Samit Bhatta, Director and Publisher, The Retail Jeweller positioned himself as the moderator for the event.

Several important points were discussed during the session. The key points, which were brought forward on the table was setting up a showroom abroad, abiding and knowing the export procedures, claiming government exemptions for exports, and knowing the RBI rules in detail. Apart from this, – the potential markets and products were also discussed and – import duties, alongside tax structures for different markets in the world was minutely dissected keeping the industry’s benefits in mind

Sabyasachi Ray made a detailed power-point presentation on the topic, ‘enhancing global presence of jewellery products vis-a-vis domestic support’. He highlighted the key points pertaining to India’s overall gems and jewellery market and explained the current position this industry held in global trade. He also elaborated on the current trend related to the Indian jewellery products and the competition domestic jewellers are likely to face via global expansion.

Taking the discussion further, Saurabh Gadgil shared -the story of his personal journey and narrated his experience related to the expansion of operations in the US. According to him, it is an important milestone for any brand to crossover the Indian border for business. He explained that this idea of spreading wings to prosper in the foreign soils was a dream he garnered early in life. When studying in college, one of his professors had told them that the Indian Diaspora is going everywhere. That was the time when the US – had a lot of mom and pop stores; those were typically selling wedding rings. This clearly opened up a big opportunity for Indian brands, which had huge potential to go out there to make a mark for itself. Also during that time no one was selling jewellery specific to the Maharashtrians in the US.

Sambhaji, on the other hand spoke about the recent procedurial changes and how today jewellers can generate their export-import report within 10 minutes. He explained – how the system has been revised and today it is more trust-based as compared to the earlier verification process.

“First we issue, than we randomly check the applications. Secondly- the import and export codes are different from the registration codes. Now there is no validity limit, no need to file any kind of returns, there is no pre-requirement, and – legal identity can be changed -from proprietorship – to private limited and partnership as required,” Sambhaji added.

Lastly, Nirakar Chand brought the spotlight on the various processes, using which gold can be acquired from government recognised agencies and banks for export purposes. He also explained in-depth the benefits of buying gold from agencies and banks.