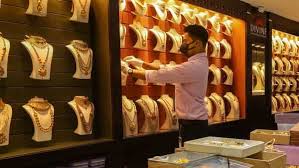 Gold prices in Indian edged higher today, in tandem with an advance in global markets. On MCX, gold futures rose 0.25% to ₹46,124 per 10 gram, after rates fell over ₹1,100 in two sessions. Silver rates were flat at ₹48,452 per kg. Silver had slumped over ₹2,000 per kg in previous two sessions. India imports most of its gold requirement and domestic prices include 12.5% import duty and 3% GST.

Most analysts expect the European Central Bank today to announce more stimulus by boosting its its emergency bond-buying scheme with hundreds of billions of euros. They predict ECB to boost the 750-billion-euro ($839-billion) Pandemic Emergency Purchase Programme (PEPP) decided in March by a further 500 billion euros.

More stimulus and lower interest rates tend to benefit non-interest yielding gold, which is often seen as a hedge against inflation and currency debasement.

“Lack of any severe retaliation by US against China has eased market nerves however continuing tensions may keep concerns about the partial trade deal signed in January. Lifting of virus related restrictions has helped economic activity pick up however economic recovery will be a slow process as continued surge in virus cases may force countries to take a cautious approach,” Kotak Securities said in a recent note.

“Gold is also supported by weaker US dollar which has slipped to March lows weighed down by reduced safe haven buying and concerns about health of US economy,” the brokerage added.

The safe haven buying into the ETFs has continued to go up and this will help support gold prices, said Jigar Trivedi, research analyst at Anand Rathi Shares & Stock Brokers.