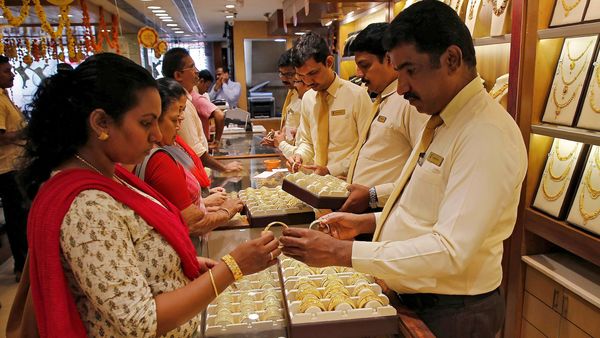 In global markets, gold traded flat at $1,512.54 per ounce and is set to extend gains to the second week in a row. Spot gold prices are up about 0.5% so far this week after a 1% gain the previous week in global markets.

A rate cut from the Federal Reserve and a weaker dollar has helped lift gold prices in global market. Though the US Federal Reserve cut interest rate for the third time this year on Wednesday, it signaled a pause in future rate cuts. “While Fed’s stance is negative for gold, it was factored in to some extent. Meanwhile, global growth concerns, US-China trade conflict and loose monetary policy stance may keep pressure on Fed to act again,” Kotak Securities said in a note. Lower interest rates help prices of non-yielding gold.

Gold also gained support from doubts about US-China trade deal. After Chile’s decision to cancel the November 16-17 Asia-Pacific Economic Cooperation summit disrupted plans for the US and China to sign a interim trade deal, US President Donald Trump said the two countries would soon announce a new site to sign a “Phase One” trade agreement.

On the other hand, weighing on price is weaker investor interest and consumer demand. New York’s SPDR Gold Trust, the largest gold-backed exchange-traded-fund (ETF), reported a 0.19% fall in gold holding on Wednesday from Tuesday.

Gold consumption in China, the world’s biggest consumer of the precious metal, fell 9.58% year-on-year to 768.31 tonnes in the first nine months of 2019, according to China Gold Association.

Analysts say that gold prices may remain choppy in the near term. However, buying may emerge at lower levels on global growth worries, they add.

“Silver along with gold may witness choppy trade as market players assess central bank monetary policy and US-China trade talks but general bias may be on the upside owing to weaker US dollar,” Kotak Securities said in a report.

Gold price today: Yellow metal under pressure; buy on dips for a target of 38,700

Govt has tried to get gold holdings disclosed before, but not succeeded